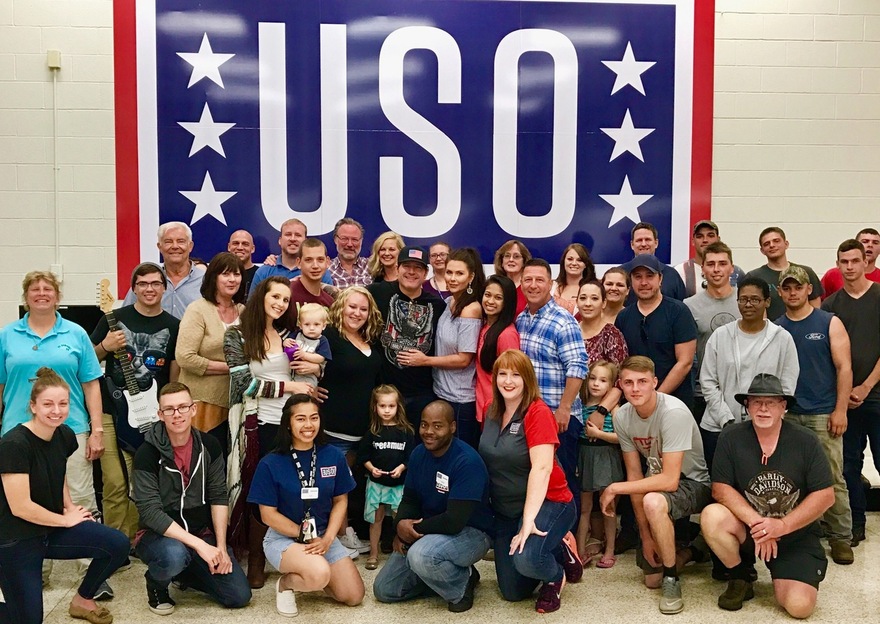 Nashville, Tenn. (August 28, 2017) – Multi-platinum-selling Country artist JERROD NIEMANN hosted a live viewing party of his edition of Celebrity Family Feud
for soldiers and their families stationed at Fort Campbell, KY, on
Sunday night (8/27). He competed against good friend and labelmate Lee
Brice to win $25,000 for the USO. Although his buddy ultimately won the
game with proceeds benefiting Folds of Honor, Niemann received $5,000
for his selected charity. After a life-changing USO tour in 2016, the
singer-songwriter is committed to bringing awareness to the brave men
and women that fight daily for our nation’s freedoms.

Marking the beginning of a new chapter for the PLATINUM-certified #1
artist (“Lover, Lover,” “Drink to That All Night”), Niemann is releasing
a daring new set of tunes with his fourth studio album and first for
Curb, THIS RIDE, on October 6. Regarded as one of Country
music’s most progressive artists, he has nearly a decade of
outside-the-box success as songwriter, singer, and performer under his
belt. Co-produced by Niemann and studio ace Jimmie Lee Sloas, THIS RIDE
features 13 inspired songs sourced from a stable of all-star tunesmiths
including Shane McAnally, Ashley Gorley, Ross Copperman, Rodney
Clawson, Craig Wiseman, Dallas Davidson, Natalie Hemby, Josh Osborne,
Chris DeStefano and more. Each track pushes the boundaries of
conventional Country wisdom – just as the singer-songwriter-producer has
continually done throughout his career. Fans and critics alike have
already praised THIS RIDE’s first two singles – the feel-good
“A Little More Love” duet with Brice, and the classy romance of current
single “God Made A Woman.”

Fueled by a nearly decade-long career, prolific Nashville hitmaker
Jerrod Niemann is digging deeper with his forthcoming Curb Records album
with the uplifting duet “A Little More Love” (with Lee Brice) and his
romantic follow-up single “God Made A Woman.” Known for clever wordplay
and attention-grabbing lyrics, the highly engaging singer-songwriter
last topped Country charts with his PLATINUM-certified anthem “Drink to
That All Night,” a multi-week #1 from the album HIGH NOON – on
which he co-wrote eight of the 12 tracks. Niemann first burst onto the
scene in 2010 with his critically-acclaimed major-label debut, JUDGE JERROD & THE HUNG JURY,
which skyrocketed on the strength of his PLATINUM-certified #1 smash
“Lover, Lover” and GOLD-certified Top 5 “What Do You Want.” His second
release, FREE THE MUSIC, included Top 15 “Shinin’ On Me” and
poignant ballad “Only God Could Love You More.” From Academy of Country
Music, Country Music Association, and CMT Award nominations, to
headlining and touring with some of Country’s hottest acts – Dierks
Bentley, Brad Paisley, and Keith Urban – Niemann continues to make his
mark by creatively pushing boundaries all while offering a sincere nod
to the legends before him.