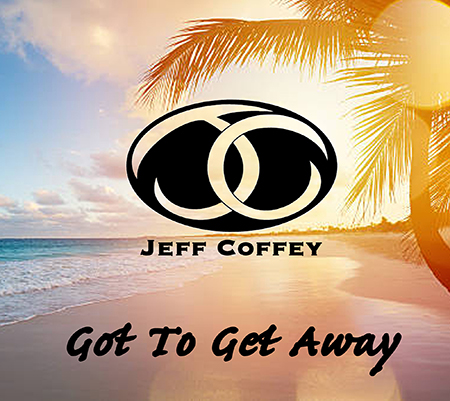 NASHVILLE, Tenn. (February 28, 2018) – SmokeTree Records artist Jeff Coffey
announced his highly anticipated third solo album to be released in the
Summer of 2018. Coffey offered fans a tongue in cheek taste of what is
coming with the first single, “Got To Get Away,” on Feb. 27th available
on iTunes and Amazon.
Hot off the presses, the new single penned by Coffey is obviously a fan
favorite with an impressive No. 1 debut on the Amazon Music Movers and
Shakers as well as No. 10 on New Releases and No. 12 on the Top 100 Best
Sellers lists! The illustrious performer gave fans a first opportunity
for a sneak peek via his fan newsletter, COFFEYMATES on Monday.

“The counter beat percussion and guitar feel grabs you from the beginning of the song and harmonies are smooth,
but obviously what seals the deal is Jeff’s voice. Coffey has a spring
time/summer time/get away time hit on his hands. I can’t wait to hear
the rest of the album when it releases. The mix and Jeff’s voice go
together like a beach and a cold beverage!” – Eric Dahl, music reporter/reviewer.

“Sometimes when it gets too hard, you feel like bangin’ your head against the wall

But you don’t need to look too far, to see that everyone around you can
hardly breathe at all. Sometimes when I’m alone, thinkin’ about the time
and how it’s gone

Maybe I should get out of town, ain’t no sense in me and myself just hangin’ around

I got to get away

Leavin’ all my troubles far behind me

I got to get away

Somewhere where no one could ever find me…”

Although the title is fitting for his current situation after departing
his position as lead tenor vocalist and bass player for the
multi-platinum selling, Rock ‘n’ Roll Hall of Fame group Chicago, the
song reflects a fun, lighthearted tune about getting away from your
everyday stress. Fans can watch for digital availability on streaming
platforms to be online in the near future for “Got To Get Away.”

Former lead vocalist and bassist for the multi-platinum, Rock and Roll Hall of Fame band, Chicago, Jeff Coffey
is fresh off a two year tour with Chicago and has two solo CD projects
under his belt with his third solo album to be released in the Summer of
2018. Coffey is an engaging, singer, songwriter and artist with music
that is a blend of Pop, Rock and Adult Contemporary sounds, featuring
melodically soaring vocals mixed with strong radio friendly hooks. The
rich sounds of Jeff’s music have found their place on the Pop and Rock
airwaves and received spins on over sixty Top 40 stations across the
country as well as XM Radio. Fans have compared Jeff’s vocal range as
reminiscent of Steve Perry and Tommy Shaw. His music has been featured
on numerous television shows on major television networks such as NBC,
MTV, CMTV, FOX, E! Network, HGTV, Travel Channel, A&E, Bravo and the
CBS Macy’s Thanksgiving Day Parade.  Keep up to date with Jeff Coffey
on his website: www.jeffcoffey.com.