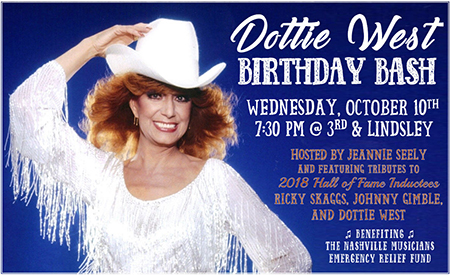 Country music royalty and a fifty-one year member of the Grand Ole Opry, Jeannie Seely is slated to host the star studded second annual Dottie West Birthday Bash
on October 10th at 3rd & Lindsley in Nashville. The event supports
Nashville Musicians Association with 100% of all money going to the Musician’s Emergency Relief Fund,
donations are accepted at the door in lieu of tickets. For those unable
to attend, donations to the Musician’s Emergency Relief Fund can be
made here.

The show will commemorate the birthday of Dottie West and her 2018
induction into the Country Music Hall of Fame along with tributes to
Johnny Gimble and Ricky Skaggs who are being honored alongside West.
Doors will open at 6 pm and the show starts at 7:30 pm.

“The more I look at the rundown on this show the more excited I get to see and hear it,” said Jeannie Seely.

The Nashville Musicians Association, AFM Local 257, was
founded in 1902, and exists to serve and protect musicians in an
increasingly challenging business environment. We represent studio
musicians, touring bands, symphonic musicians, vocalists, arrangers,
composers, contractors, and more. We negotiate and administer contracts,
track additional uses of songs recorded under AFM union contracts, and
represent musicians in all genres of music from jazz to rock, pop,
bluegrass, gospel, and yes, country music. Our members range from music
icons such as Vince Gill and Loretta Lynn, to young bands working their
way up the ladder of success, and everything in between. For more
information on the Nashville Musicians Emergency Relief Fund, visit nashvillemusicians.org

Country music legend Jeannie Seely has achieved chart
topping songs as a solo artist, as a duet partner, and as a songwriter.
Early in her career, Jeannie’s deeply moving vocals earned her the
nickname of “Miss Country Soul”– a title that’s still used today.
Jeannie’s biggest dream came true when she was inducted as a member of
the world-famous Grand Ole Opry, becoming the first Pennsylvania native
to do so. Jeannie also became the first female to regularly host
segments of the weekly Opry shows. Jeannie takes much pride in her
involvement and support of musicians’ rights. In 2017, Jeannie
celebrated her 50th anniversary as a member of the Grand Ole Opry.  From
her 1966 Top 10 Billboard album The Seely Style to her recent
self–produced album Written In Song, consisting entirely of songs she’s
written, Jeannie’s recordings have spanned six decades and provided
enjoyment to country music fans all around the world. In his 2003 book
“Finding Her Voice: Women In Country Music,” music critic Robert K.
Oermann wrote, “With her chin-out, tough/tender, heart-of-gold manner,
Jeannie Seely remains one of country’s most completely modern female
personalities,” and that statement still holds true. Keep up with all
things Jeannie Seely at www.jeannieseely.com.