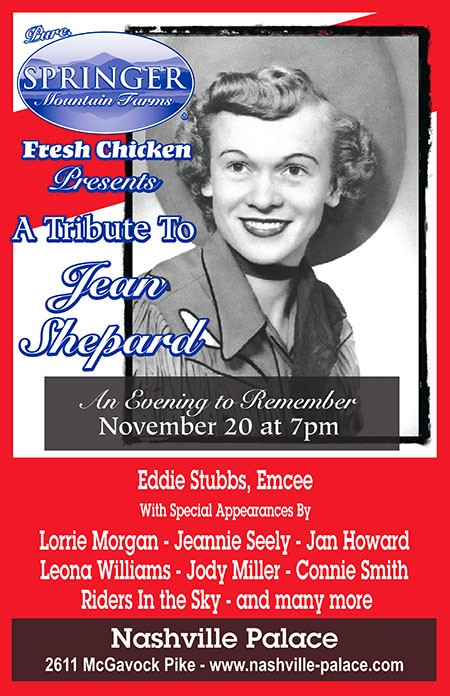 Tickets On Sale NOW Starting at $20!

NASHVILLE, Tenn. (November 4, 2016) –
Country music royalty, including Lorrie Morgan, Jeannie Seely, Jan
Howard, Leona Williams, Riders in the Sky and more will join together to
honor Jean Shepard during an all-star performance Nov. 20 at The
Nashville Palace from 7:00 – 11:00pm. Tickets to the event, hosted by
WSM’s Eddie Stubbs, are on sale now at the low price of $20 ($25 at the
door) thanks to support from Springer Mountain Farms. CLICK HERE to purchase tickets.

The artist lineup will pay tribute to Shepard, who passed away on September 23, by showcasing some of her greatest hits.

Jean Shepard made her first appearance in country music in 1953 with
the duet “A Dear John Letter.” She followed that success with her hit
songs “A Satisfied Mind” and “Take Possession.” In 1956, she was invited
to become a member of the Grand Ole Opry. Sixty years later, she was
still touring and gracing the Grand Ole Opry stage to spread the power
of country music. In the couple of years before her passing, Jean was
inducted into the Country Music Hall of Fame and released her
autobiography Down Through the Years.

“She’s one of those people who opened doors,” Opry announcer and WSM
DJ Eddie Stubbs said in late 2015. “There were some she had to push open
and some others she had to kick her way through.”

About Springer Mountain Farms®
Springer Mountain Farms® is a family owned business that has been
raising chickens for over 40 years. Years ago in the hills of Northeast
Georgia, our founders started selling chickens in the back room of their
grocery store. They built the company on strong values and kindred
relationships within the farming community, and all of the farmers, with
up to forty years of experience and third generation families, take
great pride in what they do to raise the finest chicken on the market
today. Over the years, through studying and learning about the benefits
of better animal care, better living conditions, and more stringent
biosecurity practices, Springer Mountain Farms® became the first poultry
producer in the world to gain the endorsement of American Humane Association
under their American Humane Certified program. We exercise great care
in all that we do, and we know you’ll be able to taste the difference.
“Great Care. Great Taste.”