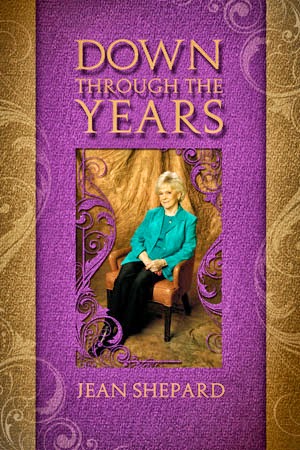 Book signing to be held at Country Music Hall of Fame® and Museum Friday, June 6 at 1 P.M.

Nashville, Tenn. (June 4, 2014) – Country Music Hall of Fame® member, the legendary Jean Shepard has
had quite a story to tell about her life and career, but never had the
right opportunity. Understanding its potential historic significance, Gus Arrendale, President of Springer Mountain Farms Chicken and Larry Black, Executive Producer of “Country’s Family Reunion” put their heads together to help her publish and distribute her long-awaited autobiography. “Down Through the Years” will to be released this week as CMA Music Festival fans descend upon Nashville.

Shepard will roll out this 224-page, beautifully-bound hardback at a special book-signing (while supplies last) at the Country Music Hall of Fame® and Museum this Friday, June 6 from 1 – 2 P.M.
Matriarch of the Grand Ole Opry and its longest-standing female member,
Shepard presents a first-hand account of her life and over-60-year
iconic career in her own words (spanning back to the “golden age of
Country Music,” through her 2011 induction into the Country Music Hall of Fame® and
beyond), as a “personal conversation with every reader of this book.”
After the signing, the book may be purchased exclusively through the Country’s Family Reunion website for $19.99 (plus $6.95 shipping and handling) at cfrvideos.com or by calling 800-820-5405.

Regarded as a pioneer for women in country music, Shepard was signed to Capitol Records at a time when it was thought women could not sell records. Discovered by Hank Thompson following the success of Kitty Wells, Shepard appeared on the first network Country Music television show, “The Ozark Jubilee.” Jean was also the first female in Country Music to sell a million records, to make a color television commercial and to overdub her voice on recordings.  Shepard’s career has yielded over 45 albums and 70 singles, including “A Dear John Letter,” “Second Fiddle (To an Old Guitar),” “Tips of My Fingers” and “Slipping Away,” to name a few. She regularly performs at the Grand Ole Opry and maintains a busy road performance schedule.

Here are a few excerpted facts that you may not have known about Jean Shepard: