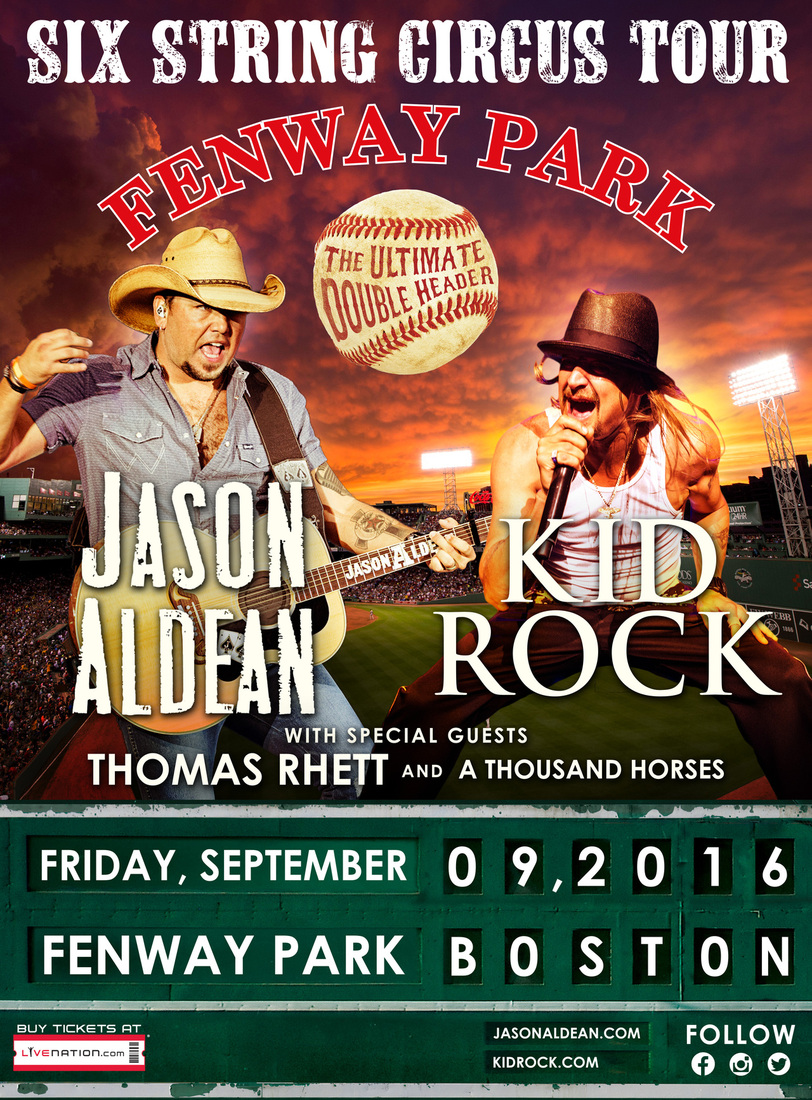 Nashville, TN – April 15, 2016 – Known for his ability to “routinely fill stadiums” (Las Vegas Sun), this year’s ACM “Entertainer of the Year” Jason Aldean will return to the road as his SIX STRING CIRCUS TOUR
launches May 19th in Rogers, AR with continued support from Thomas
Rhett and A Thousand Horses. As the first-ever Country artist to take
the stage at Boston’s Fenway Park, Aldean will route the tour to the
home of the Red Sox on Sept. 9, after previously smashing attendance
records set by Paul McCartney and Dave Matthew Band, to co-headline with
multi-Platinum award-winner Kid Rock. Tickets for the first dates of
27-city run are on sale now, while tickets to the Fenway Park show will
be available next Fri., April 22 at 10:00A ET on JasonAldean.com and
LiveNation.com.

“It
was really cool to go over and play Australia for the first time last
month, but there’s nothing like shows at home,” shares Aldean. “I’m
looking forward to Kid Rock meeting up with us in Boston, we’ve played
each other’s shows and been friends for awhile, so actually getting to
do a full night together somewhere as iconic as Fenway Park is going to
be a huge. The guys and I are ready to get back out there for the summer
in the amphitheaters.  That’s always a party waiting to happen with
us!”

The coveted ACM Triple Crown winner “has flipped the switch” with his “muscular new single” (Rolling Stone)“Lights Come On” as “the high-octane jam” (Entertainment Tonight) taps into the universal connection he shares with fans every night on tour. After debuting his brand new track during the 51st Annual ACM Awards
the track immediately skyrocketed to the No. One spot on Billboard’s
Country Digital Songs chart. The new music follows OLD BOOTS, NEW DIRT
which debuted at the No. One spot on Billboard’s Country Albums Chart,
earned its PLATINUM certification only nine weeks after release and
spawned three consecutive No. Ones, marking 16 career chart-toppers.
Aldean has “never been afraid to let his diverse musical interests
influence his sound” (The Oklahoman) as each album released has earned PLATINUM or better tallying more than 10 million album sales.