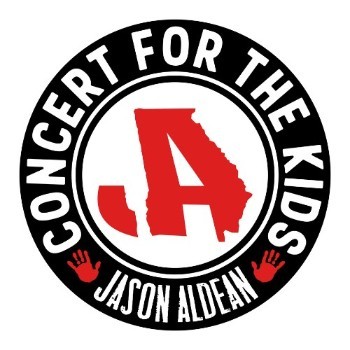 JASON ALDEAN PLANS NEXT HOMECOMING WITH THIRD “CONCERT FOR THE KIDS” IN MACON, GA ON SEPT. 6TH

JASON ALDEAN PLANS NEXT HOMECOMING WITH

THIRD “CONCERT FOR THE KIDS” IN MACON, GA ON SEPT. 6TH

Ahead of Ticket On-Sale for Concert Event at Macon Coliseum

To Once Again Benefit the Region’s Children’s Hospital

All Fans Can Purchase Tickets to “Concert For The Kids”

NASHVILLE, TN – Jul. 20, 2018 – Before tomorrow’s HIGH NOON NEON TOUR
stop at Atlanta Braves new SunTrust Park stadium, Georgia-native Jason
Aldean has announced details behind his third Concert For The Kids charity event on Thursday, Sept. 6th in Macon, GA. The three-time and reigning ACM
“Entertainer of the Year” will return to the Macon Coliseum with direct
support from Lauren Alaina. After raising more than $1.2 million from
the past two events, proceeds will once again benefit Beverly Knight
Olson Children’s Hospital, Navicent Health, which serves as the region’s
only dedicated pediatric facility, serving central and south Georgia
that enhances the lives of children through patient care, research and
education. Tickets go on-sale to the public beginning next Friday (7/27)
at 10:00A ET on JasonAldean.com, Ticketmaster.com and the venue box office during normal business hours.

“There are a lot of reasons I love doing what I do, but being able to
give back to these kids and their families is definitely really
important to me,” said Aldean. “We’ve been able to help support the
build of an entirely new facility, so I’m looking forward to seeing how
the community shows up for the hospital this year and what we can do to
keep helping the people there.”

“We are so grateful to Jason and his entire team. This will be the third
year he has done a concert benefiting the sick and injured kids cared
for at the Beverly Knight Olson Children’s Hospital. We just can’t thank
him enough,” said  Ellen Terrell, Chief Development Officer at Navicent
Health.

“Aldean has opted to not back down and continue working in the well-worn groove” (UPROXX)
that has helped define the genre’s 21st century with his
sure-footedness, which plays into more than 15 million total album
sales, dozens of sold-out stadium shows and countless recognition from
the GRAMMYs, ACMs, CMAs, BBMAs, People’s Choice Awards and
more. Continuing that momentum, Aldean is only the second Country act in
history to score four consecutive chart-toppers on the all-genre
Billboard 200 albums chart with REARVIEW TOWN, with six of his previous
LPs have achieved PLATINUM certification or better. Aldean’s wide-open
approach has made him a perennial live-show favorite for the format as
he has headlined the biggest stadiums in the United States. He continues
to do so on his HIGH NOON NEON TOUR and “doesn’t waste any time ripping
through 23 songs during his 95-minute set” (Des Moines Register). For more information and for a full list of upcoming tour dates, www.jasonaldean.com.