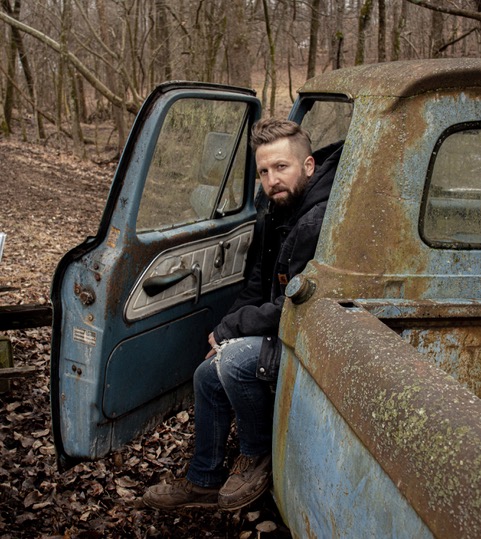 Answer:  I’m
a storyteller from a generation who listened to everything from
Metallica to Taylor Swift, Chesney to Eminem because it was all
available to me. I’m right where rock meets country, melodies you can
sing along to, stories you can relate to, lyrics that make you wanna
drink a beer.

Answer: When
I look back on last year I can honestly say I wrote some of my best
songs I’ve ever written and played some of the best shows I have ever
played. .  I
released new music that was played not only on all the streaming
platforms, but Sirius XM and iHeart Country Radio Streaming as well as
CMT!   I also went on my “Econoline Tour” all over the US and Canada
opening for big acts like Brett Eldredge, Kip Moore, Maren Morris and
Brad Paisley. My songwriting career really took off as well and I’ve
started getting a lot of songs cut on other artists.   That shows me I
have really grown as a songwriter. I’m constantly holding myself to a
high standard and trying to improve in everything I do.  I want people
singing my songs at the top of their lungs in stadiums all over the
world.

Answer:   I
just put out a 3 song digital EP out called “Tractor Town” and it’s
doing really great so far. I think it’s connecting with folks who grew
up in small towns and grew up around agriculture. Also people who just
like to hear a good country song that tells a story.  The lead single
from the EP, “Tractor Town” has one of my best videos to date.  CMT did a
World Premiere on it and I’m really proud of it.

Answer:  It’s
called Tractor Town which is the title track of the EP. I chose it
because the songs all reflect living in a small town aka a “Tractor
Town”. I felt the mood of all the songs fit that.

Answer:  I
co-wrote all the songs on the EP. I write usually 3-5 days a week, so
in a year I’ll write over 100 songs easily. Like I said before, I hold
myself to a high standard. So when picking these three songs to record
and release, I wanted to make sure they were my best and stood out, but
also they fit together as a collective piece.

Tractor
Town was inspired by growing up in a small town where tractors ruled
the roads. Everything in a small town revolves around farming and
everything moves slow in a small town. Sometimes it feels like you’ll
never leave, but if you do, all you’ll want to do is go back. It’s how I
feel about the town I grew up in, Hamel Minnesota.  Better
in a Bar was written with a couple other artists Canaan Smith and
Hunter Phelps and our friend Nick Donley. We were just talking about how
when you’re at a bar having a beer with your friends, it just tastes a
little better. We wrote the song about all these other universal truths,
and drove home our favorite, beer tastes better in a bar. Cold Beer
& Pretty Girls was inspired by opening up for Billy Currington in
Milwaukee, WI a few summers back. I just wanted to write a song about
the feeling of summertime and in my opinion, the two best things in the
world.

Answer:  I
think I evolve every record. I’ve really come into my own as a writer
and I think I’m writing songs that feel authentic and tell my stories.
I’ve been on a life long quest for writing the next song and finding the
next “sound” of my music. I don’t like to repeat myself, I’m constantly
trying to evolve.

Answer: Great
Songs! Ha! If only they all could be great. Sometimes you don’t know a
song is great until it’s recorded and sometimes the performance and
recording process is what really captures it all. I really love to
record fun songs, I think taking everything too seriously is boring. I
like some of my songs to have a smile.

Answer:  My
favorite song I’ve recorded so far is “Sleeves”. The story is about my
tattoos, what each of them mean to me and why I got them. It’s been my
most impactful release of my career so far. I think it resonates with
people who have tattoos and feel the need to explain them, and helps
those who don’t have tattoos understand why someone would get one.

Answer:  100% but I also trust the creatives I work with so it’s a collective process, but in the end it’s my decision on everything.

Answer:  I think it’s about hard work and determination. Having resilience when things don’t go your way. It’s typically a business of  rejection,
most days you’re going to be told “No”. You have to be able to take
that and move on. You have to learn how to constantly evolve and
improve, take criticism and learn from your mistakes. I think a lot of
folks think they want to be in the creative arts but when success
doesn’t come as soon as they hoped, they give up. I’ve never given up
and I think that’s why I’m still here.