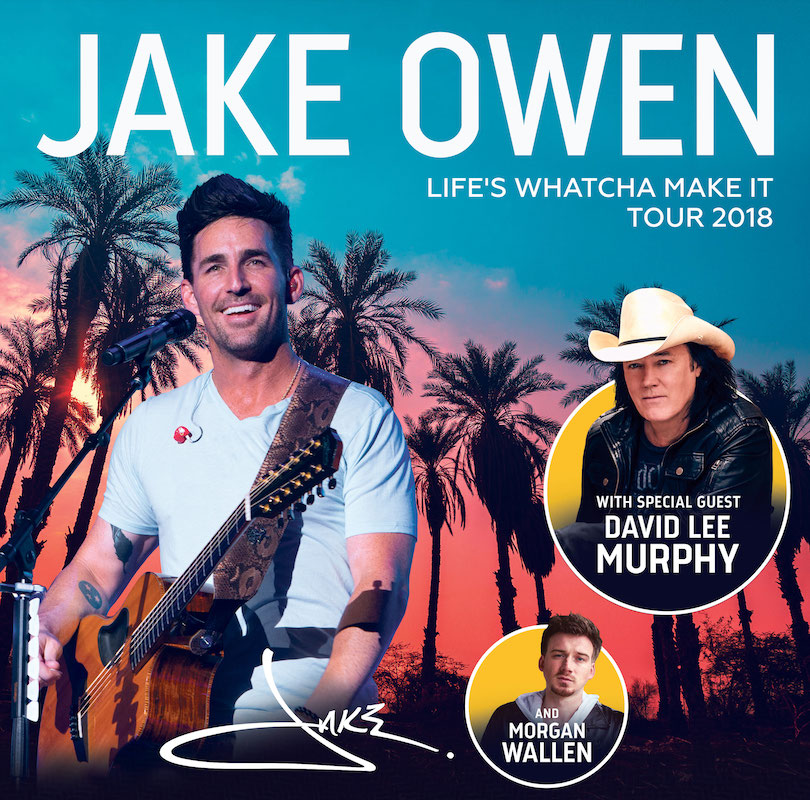 Jake Owen together with David Lee Murphy and Morgan Wallen on tour!

New Single, “Down to the Honkytonk,” Available at Midnight

Nashville,
Tenn. (August 6, 2018) One week after Jake Owen’s single, “I Was Jack
(You Were Diane),” hit No. 1 on the country airplay charts, the Big Loud
recording artist announces his new single, “Down to the Honkytonk,” and
the second leg of his “Life’s Whatcha Make It Tour 2018.” The tour will
include special guest David Lee Murphy and rising star Morgan Wallen.
Tickets will go on sale starting Friday, August 10th at 10:00 a.m. local
time. Check it out HERE.

“I really do believe that life’s whatcha make it,” says Owen. “That’s
actually a line from my new single ‘Down to the Honkytonk.’ I’m so
pumped to announce that the second leg of the ‘Life’s Whatcha Make It
Tour’ will be starting this fall. I’m equally as excited about who is
coming out on the road with us. David Lee Murphy is such a great guy and
a writer on one of my biggest hits, ‘Anywhere with You,’ and Morgan
Wallen is my label mate who just had a huge hit with FGL. It’s going to
be an awesome way to wrap up such a great year.”

In addition, Owen’s new single, “Down to the Honkytonk,” will be available TONIGHT at MIDNIGHT. Listen HERE.

Jake has been in the recording studio working with award-winning
producer Joey Moi, who produced Jake’s biggest hits to date, “Barefoot
Blue Jean Night,” “Alone with You,” “Beachin,’”and his most recent No. 1
hit, “I Was Jack (You Were Diane),” to name a few.