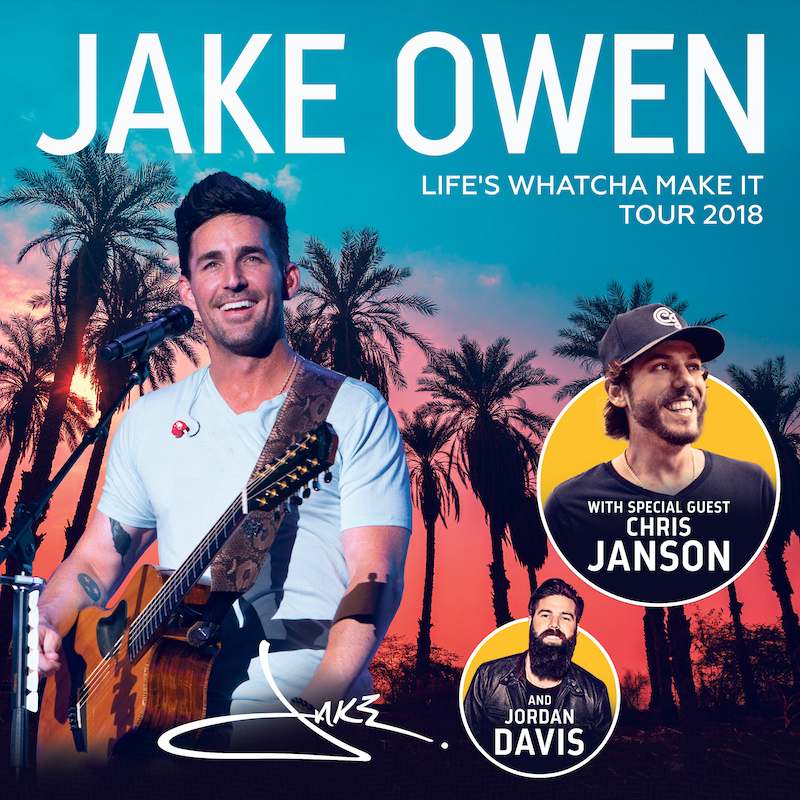 “I really do believe that life’s whatcha make it,” says Owen. “If you
wake up feeling positive, there’s a pretty good chance that you’ll see
things throughout the day in a positive light. I think concerts are like
that: it’s what you make it. People show up to have a good time and the
artists on stage feel that too. A lot of my songs over the years have
pointed to that idea. The fact that we’re playing baseball parks on
Friday and Saturday nights throughout the summer, when people are ready
to get out, have a good time, and don’t have to work the next day, is
really cool. And, I’m so pumped to have Chris Janson and Jordan Davis on
the bill with me. It’s going to be an awesome tour. I’m fired up!”

Owen has partnered with CID Entertainment to offer three levels of VIP
Ticket Packages on tour. VIP Ticket Packages include a premium concert
ticket and exclusive VIP merchandise. Fans can also opt-in to join Jake
before the show for a ‘Good Company’ experience where he’ll perform two
acoustic songs. Details on the Jake Owen VIP package can be found HERE.

In
addition, Owen has been in the recording studio working with
award-winning producer Joey Moi, who produced Jake’s biggest hits to
date: “Barefoot Blue Jean Night,” “Alone With You,” and “Beachin,’” to
name a few. New music from Owen will be available on Wednesday, February
28th, details coming soon.

*Does not include Chris Janson

Owen is an ACM award-winner and has had six No. 1 singles to date – the
2X PLATINUM anthem “Barefoot Blue Jean Night,” PLATINUM-certified hits
“Beachin’,” “Anywhere with You,” “Alone with You,” “The One That Got
Away,” and, GOLD-certified “American Country Love Song.” Owen’s fifth
studio album, AMERICAN LOVE, debuted at No. 1 on Billboard’s Top Country Albums chart and No. 4 on the Billboard 200
all-genre chart. Most recently, Owen signed a new label deal with Big
Loud Records, reuniting him with Joey Moi, who produced his biggest hits
to date. Owen and Moi are currently in the studio working on a new
record. For more information about Jake, visit www.jakeowen.net, on Facebook at www.facebook.com/jakeowen, and follow him Instagram @jakeowenofficial & Twitter @jakeowen

Country artist and prolific singer / songwriter Chris Janson began his
professional music career more than a decade ago, but his recently
released sophomore album Everybody has elevated him to the next
level. Called “quite possibly the most important song to come out of
Nashville in years” (CMT), Janson’s brand new single “Drunk Girl” is
already drawing praise from fans and critics alike. The “heart-piercing
ballad” (People) follows No. 1 singles “Fix A Drink” and his
debut album’s Platinum-certified smash “Buy Me A Boat.” Janson has also
penned chart-topping hits for artists including Tim McGraw, LoCash and
more. Lauded for his “infectious” (Billboard) performances, the
electrifying multi-instrumentalist is hitting arenas across the nation
this spring alongside label mate Cole Swindell on the Reasons To Drink
Tour. A Grand Ole Opry regular with over 150 appearances to his name,
Janson was recently invited by Keith Urban to become the hallowed
organization’s newest member. For more information about Chris, visit www.chrisjanson.com or follow him on Facebook, Twitter or Instagram.

MCA Nashville’s Jordan Davis has been named an “Artist to Watch” by
Billboard, Rolling Stone, CMT, Pandora, Shazam, Amazon Music, Sounds
Like Nashville, The Tennessean, Whiskey Riff and more. A native of
Shreveport, Louisiana, Jordan was surrounded by music from a young age
as both of his parents played instruments and he sang in his church
choir. The middle of three children, he learned to play guitar around
the age of 12 in between baseball and football games. After graduating
from LSU, Jordan briefly pursued the path of his degree working as an
environmental consultant in Baton Rouge, Louisiana; however, his passion
for music and songwriting eventually compelled him to move to Nashville
in the summer of 2012. In 2015, he signed with ole for publishing
followed by a record deal with Universal Music Group in 2016. Last year,
Jordan received the prestigious Songwriters Hall of Fame Abe Olman
Scholarship for Excellence in Songwriting as the only Nashville-based
songwriter. Jordan just released his debut single “Singles You Up,”
which continues to climb country radio’s Top 10. “Singles You Up” spent
several weeks on the Spotify US Viral Chart (all genre) and even hit the
Spotify Global Viral Chart (all genre). The singer/songwriter wrapped
touring with Kip Moore on his “Plead The Fifth Tour” last fall and just
embarked on his first headlining “White Wine and Whiskey Tour” this
month with special guest Jillian Jacqueline. Jordan is set to release
his debut album HOME STATE on March 23. For additional information,
visit www.jordandavisofficial.com