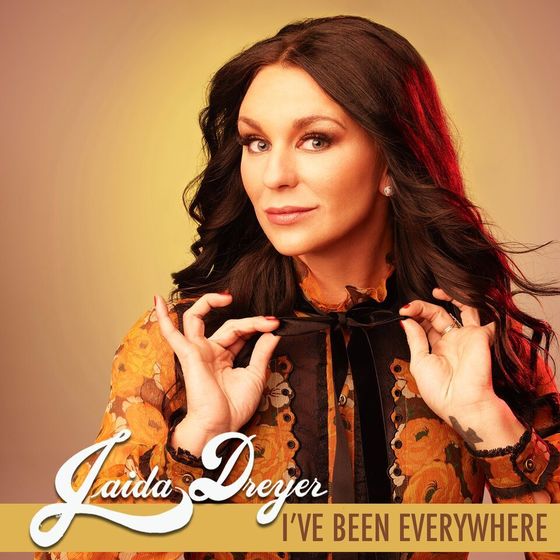 Singer-songwriterJaida Dreyer has releasedher version of the hit Hank Snow song, “I’ve Been Everywhere,” following her appearance on USA Network’s“Real Country.”  The track is now available on all digital platforms, including Amazon, Spotify, Apple Music and more.

The
classic Country standard was written by Australian country singer Geoff
Mack in 1959 and became most widely known when it was a number-one US
country hit for the late Grand Ole Opry entertainer, Hank Snow on RCA
Victor. The song in which he portrayed himself as a hitchhiker bragging
about all the towns he’d been through, was later recorded by artists
including Lynn Anderson, Asleep at the Wheel, Johnny Cash and more and
has also appeared on TV and movies including Pat Garrett and Billy the
Kidd when Kris Kristofferson did an abbreviated version and Bruce
Springsteen used the song as a snippet for “Light of Day” during his
1999-2000 tour.

Representing
Team Jake Owen, Dreyer took viewers and judges by storm as she took the
stage for the first time, competing on the show, which aired Tuesday,
Nov. 27. See her performance of “Fancy” here and “I’ve Been Everywhere” here.

Jaida
Dreyer has had songs recorded by Tim McGraw, Faith Hill, Sara Evans,
Granger Smith, Reba McEntire, Eric Church and more. Her diverse writing
style has had her penning songs with the likes of Guy Clark to top
writers on the LA pop scene. She is accredited with nine cuts in the hit
television series “Nashville,” and songs featured in A&E’s “The
Returned” and Netflix’s “Longmire.” In 2016, she celebrated a multi-week
#1 with Luke Bryan’s “Home Alone Tonight” featuring Little Big Town’s
Karen Fairchild.

Born
in Thunder Bay, Ontario, and raised in Latimer, Iowa, Jaida Dreyer was a
“horse-crazy” little girl who grew up showing competitively and won her
first of many world championships at 5, getting an early education in
the sort of work ethic required to reach success. Before she turned 18,
Dreyer had lived in seven states, including Iowa, Florida, Wisconsin,
and Tennessee, with the bulk of her time spent between Texas and
Georgia. During those gypsy years, Dreyer says, music and songwriting
remained a constant, and when forced to retire from riding at 17, she
took the biggest risk of her life: “The only other thing I knew how to
do was write songs,” Dreyer says. “Growing up on the road, I learned
that life isn’t a fairy tale,” Dreyer says. “It gave me a lot to write
about, and a story that most 17-year-old girls don’t have. I look at it
as a blessing. My crooked road has given me a career.”

Dreyer
didn’t grow up intending to become a country music artist, but to hear
the story of her crooked road to Nashville, it’s clear she was meant to
be here all along. Her unmistakable voice, bubbly personality, and
eclectic, insightful songwriting scored her a publishing deal with
Grammy Award-winning producer Byron Gallimore (Faith Hill, Tim McGraw,
Sugarland) at the precocious age of 19.

Since
then, she has achieved success as a singer, songwriter, and performer
whose traveled coast-to-coast performing for fans, and opening for
artists ranging from Eric Church, Luke Bryan, Dierks Bentley, to the
legendary Merle Haggard.  She is also a frequent guest on The Grand Ole
Opry.

She
credits her eclectic taste in music to her mother, who introduced her
to classic artists like Kitty Wells and Hank Williams, Sr., as well as
then-current hitmakers like Tanya Tucker, Keith Whitley, and Patty
Loveless. As a pre-teen, Dreyer also found herself drawn to a variety of
singer-songwriters like Emmylou Harris, Kris Kristofferson, Merle
Haggard, Lyle Lovett, and Steve Earle.