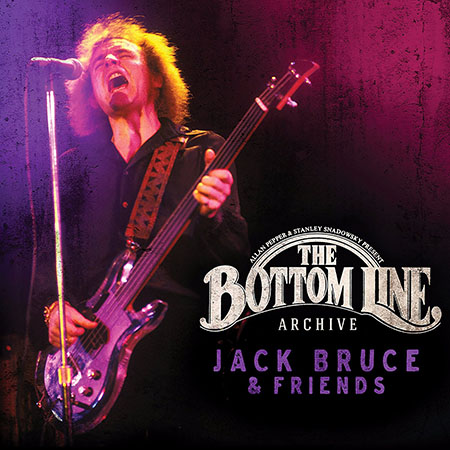 NASHVILLE, Tenn. (March 17, 2017)
– If you are only familiar with Jack Bruce’s legendary work with Cream,
you are missing out on a critical part of Rock and Roll history. Now,
that legacy is in the spotlight with the release of Jack Bruce and Friends: Live From The Bottom Line,
available now at all physical and digital retailers. The release is
distributed exclusively by BFD through RED distribution. The two disc
set, taken from a March 19, 1980 show is the first album released since
Bruce’s passing in October 2014.

Growing up in Scotland, Bruce honed his skills in acts such as Graham
Bond Organization, Dick Heckstall-Smith’s bands, John Mayall’s
Bluesbreakers, Alexis Korner, and Manfred Mann’s Earth Band. In 1966,
Bruce, along with Eric Clapton and Ginger Baker, formed the classic
group Cream. Though they were only together for a short time, the music
the trio made together made a definite mark on the musical landscape,
earning them induction into the Rock and Roll Hall of Fame in 1993.
After the group disbanded, Bruce released the first of fourteen solo
records, 1969’s Songs For A Tailor.

Bruce also recorded with Lou Reed, The Tony Williams Lifetime, and
Frank Zappa. This historic Bottom Line performance captures his unique
solo take on many of Cream’s classics, as well as his own catalog. And,
the band is just as legendary, featuring Mahavishnu drummer Billy
Cobham, and original East Street Band keyboardist/guitarist David
Sancious (both already had brilliant solo careers), with none other than
Clem Clempson, fresh from Colosseum and Humble Pie, on lead guitar.

Bruce’s peers continue to rave about his talent, which is on prominent display with each and every note on Live At The Bottom Line:

“I worked with Jack in the ‘60s when we were playing free jazz. He
played double bass, and it was like working alongside an erupting
volcano. He would stand very close to me, and his playing was as much
percussive as it was harmonic. There was a lot to learn if you were
listening. He always seemed to be way ahead of his time. I doubt anyone
will ever catch up” – Jon Hiseman

“Jack Bruce changed the whole culture of rock bass playing. He was
The King of Power Trio Bassists, and he influenced a whole generation of
bass players – including myself!” – Michael Anthony