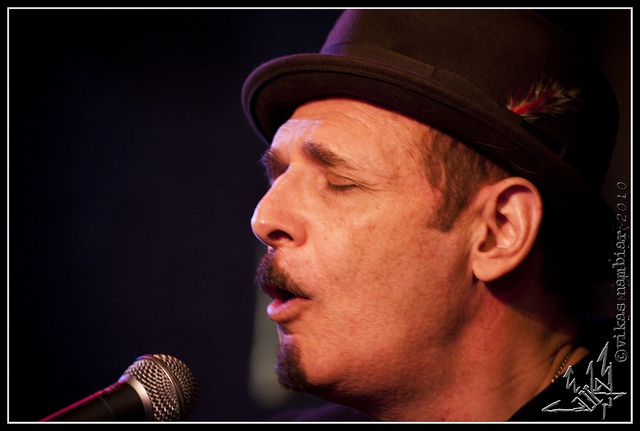 Lamitschka:  Music has many new
fans throughout Europe who may be hearing about you for the first
time. How would you describe yourself and the music you play to
someone who has never seen or heard you?
Tokyo Rosenthal:  I’d say
several things. First, while I’m classified as a singer
/songwriter, I play quite a few instruments on and off my records
including lead guitar, piano, mandolin and drums. My genre is
Americana but my music, like the music that’s classified today as
Americana, is eclectic. I can go from Country to Roots to Blues to
Latin to Folk and back to Country again all on the same album. But
somehow it all seems to flow together. I never predetermine how the
album will be. I just play and sing the songs as I feel them.
I’ve been doing this for close to 30
years now but all the prior experience came together starting about 7
years ago when I began recording “The One Score and Ten“ album
and now my I’ve completed my fifth album. For the record I grew up
outside of New York City, moved to L.A., and have resided in Chapel
Hill, North Carolina for many years. 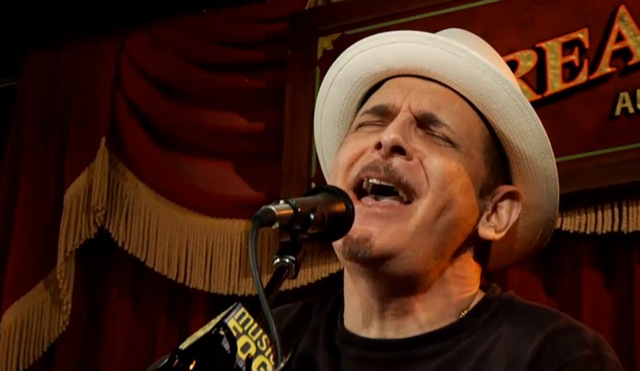 Lamitschka:  What is your latest
CD and how’s it doing?
Tokyo Rosenthal:  The new CD is
called „Tokyo’s Fifth“ and I believe it’s off to a good start
if I believe the initial reviews. Early airplay has been excellent in
the States and in Europe and I hope it keeps up. I’ll be touring
behind the album beginning in February and I’ll hit ireland and the
UK in May. I’m selling a few CDs and downloads too. So no
complaints and looking forward to the next several months and getting
to play the tunes live.
Lamitschka:  Please tell us about
the songs on your album (influences, etc).
Tokyo Rosenthal:  I wrote 9 of the
10 tunes on “Tokyo’s Fifth“. If you would have told me that
this record would open with a “ Klezmer style “ clarinet I would
have said you were crazy. But “This Ship Will Sail“, the title
track, called for that and there’s where we went and in my opinion
it worked great. Subconciously I think I took the song in a Civil
Wars diection. “Waste Of A Heart“ is about my Father and features
the great vocals of Andrea Connolly .KInda has a Gospel feel to it
in 5/4 time. “Mulberry Place“ seems to be the early crowd
favorite. Beautiful fiddle work by John Teer of Chatham County Line
on this one and all throughout the album. I’ll discuss the single,
“What Did I Used To Be?“, below. The Immigrant is about the abuse
of Chicanos in Arizona and is very Tex- Mex as we use accordion and
mandolin and lots of percussion. My only cover, “Helter Skelter“
, came about by Paul McCartney’s demo version of it on The Beatles
Anthlogy CD. It allowed me to take the song in another direction from
how they recorded it on The White Album. Hope Paul likes it!
“Killaloe“ is a Celtic flavored ballad about the town in Ireland
where I kicked off my last tour. John Teer tears up the CD again with
his fiddle playing on this one. “Smoke and Mirrors“, “WE Put
You Down“, and “Thank You You’re Beautiful“ round out the
album in reggae, grunge, and samba styles respectively while staying
within the vibe of the entire record. Kudos to engineer Chris Stamey
for making that happen!!

Lamitschka:  Your current single
is being played by radio. What do you feel is special about this song
that makes people want to hear it?
Tokyo Rosenthal:  “What Did I
Used To Be?“ touches on every element of the current economic
issues all over the world. Job loss, outsourcing, gas prices, home
loss, obsolesence, reinvention, and suicide. If you can’t relate to
this song then you must have your head in the sand. Musically the
pedal steel playing of Allyn Love distinguishes this song from any
other on the CD. He’s masterful and created the opening lick that
ties all the elements together. Finally, Nic Beery produced and
directed a very special video to go with the song and express its
sentiments. It’s gone mini-viral and I believe it will coninue to
attract viewers.
Lamitschka:  How much creative
control do you have over your music?
Tokyo Rosenthal:  I have total
control but tha being said I look to others for guidance and try and
give creative freedom to the other musicians that play on my CDs. My
“guru“ is Chris Stamey who engineers, assists in the production,
and plays bass on my albums. He gets the best work out of me and I
listen closely to his opinions. Charlie Chamberlain tours with me and
seems to know what I want before I know what I want, LOL, as far as
lead guitar work and mandolin. The same can be said for John Teer and
Allyn Love when it comes to fiddle and pedal steel repsectively.
While I have the final say I’d be hard pressed to point out even
one disagreement between any of us on “Tokyo’s Fifth“. Great
bunch of guys to and gal(Andrea Connolly) to work with. 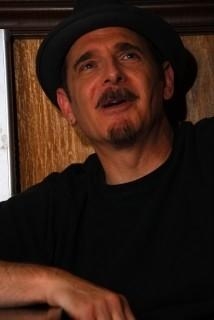 Lamitschka:  If you had the chance
to change something about the music industry, what would it be?
Tokyo Rosenthal:  I would want to
maintain the CD Store, even if you have downloading stations in the
store as well. The loss of the CD Store a a fraternal place is
criminal. It’s also a loss as a marketing vehicle. For better or
worse, CD Store employees have always been a great yardstick for
what’s new, what’s different and what’s good. To have to scrape
around the internet(no offense Chrisitian) to find what’s new, and
spearate the good from the bad, is often futile as there’s just too
much out there. The local CD Stores were a great gathering place for
musicians, fans, local promoters, and collectors. It’s loss has
been devestating to the the music industry in my opinion.
Lamitschka:  As an artist, you so
many tasks such as recording, touring, interviews. What do you like
best, what’s your favorite activity?
Tokyo Rosenthal: Recording for
sure. It allows me to take this raw tune, that I wrote basically on
acoustic guitar with some words often just scribbled on an “air
sick bag“ , and turn it into something much more with the help of a
good team. There’s nothing like it. To hear your musical thoughts
get created, bit by bit, until it resembles what was inside your head
is a great experience that I can’t get oftenenough.
Lamitschka:  What was your big
break that got you into the music business?
Tokyo Rosenthal:  My break that
allowed me to start recording and get played on the radio was a song
called “Edmonton“. Apparently no one had written a song with
Edmonton in the title before. Next thing I knew it ws ont the radio
and the Mayor was giving me the key to the city. I kept going from
there and have never stopped.
Lamitschka:  Before you became a
artist, were your friends and family supportive or was it a struggle?
Tokyo Rosenthal: I must say that
without my family amd friends my musical journey would have been
impossible. My wife, while letting me tour around and live my dream,
also built and maintains my web site. My daughters attend as many
shows as possible and drag friends with them while helping me network
on line as well. Even my Mom gets into the act and she remembers all
my early bands as a teen. Publicists, while paid, have ot have
passion for your work. I believe mine do and they include Billy James
at Glass Onyon and Peter Holmstedt at Hemifran. It would have been
easy for my friends to write my efforts into recording and touring as
fantasy. But to their credit, they turn out in many cities all over
the world when I need them. So while this business is a struggle,
getting the support hasn’t been.
Lamitschka:  What can your fans
expect to see when they see you in concert?
Tokyo Rosenthal:  They can expect
a different experience from what they hear on my CDs. As I tour
normally as a duo or solo, I can’t and don’t try to recreate the
orchestration on the CDs. Instead we give them a different
interpretation. But perhaps most important are the stories behind the
songs which I love to tell the audience, often prefaced by, “Gotta
minute?“
Lamitschka:  Many music fans today
get their information about artists online. Do you have your own
website and what will fans find there?
Tokyo Rosenthal:
WWW.Tokyorosenthal.com
Christian Lamitschka (
Ch.Lamitschka@t-online.de )
www.MySpace.com/ChristianLamitschka