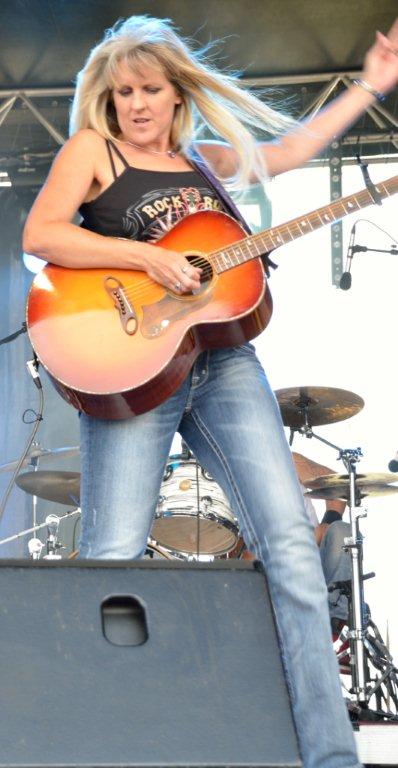 Lamitschka:  Music has many
new fans throughout Europe who may be hearing about you for the first
time. How would you describe yourself and the music you play to
someone who has never seen or heard you?

Liane Edwards:  We are really a country rock band. We like
it when the crowd is jumping and the room is rockin’! For example,
we have played alot in France, and they don’t appreciate alot of
slow songs, so to please a French crowd it
has to move! I like giving a show, entertaining, making the crowd
laugh or surprising them as much as
possible. Each show should be a fun time for everyone, the artists
and the crowd. I want people to forget, at least for a few hours,
all their worries and just enjoy the show. We live in a stressed out
world, and I really do think that music can be a key to happiness for
many people.

Lamitschka:  How did you
choose the title for the CD?  Is there a story behind the name?

Liane Edwards:
The new CD is called „High Heels and Shotguns.“ With a name like
that you can only assume there is a story! Well, after having
written the songs for this album, I started looking for the album
title, something that defined the largest number of songs, or a
thread that seems to bind the songs together. This title actually
came to me in a dream (not kidding) and I woke up conviced! The
majortiy of the songs on the album are about women, at different ages
or mindsets. The title, and the cover, are meant to say that women
have many faces and roles: wife, mother, femme, leader, follower,
etc. We are not simply ONE of the roles, we are all of them! It
could have been called „Lipstick and Sweat“ or any other pair of
opposites! People seem to love guessing about the title and the
cover, and I really enjoy it when they apply it to themselves!

Lamitschka:  Do you write
the songs yourself? If not, how do you go about finding the songs for
your CD?

Liane Edwards:  I wrote 11 of the 12 songs. Clélia Felix
wrote one song for the album. She sent me the song „Seven Years“
and told me that she had written it especially for me. I don’t
mind using another songwriter’s materiel sometimes, it helps change
the fluid of the album. I started writing around the age of 25, a
late start perhaps. I am not one of these people that write a song a
minute, and I don’t put out a new album every six months either.
It has to feel perfect, the right timing and the right team. I feel
like the listeners deserve the best I can give them, and I try not to
settle for the easy combination or the most obvious choices. Of
course, all the songs can not be the crowd’s favorites, but I want
every song to have ist own color and originality, either in the word,
the music, or both.

Lamitschka:  Please tell us
about the songs on your album (influences, etc).

Liane Edwards: You probably noticed that there are several
different „styles“ on this album. We, as a band, have always
written songs that correspond to our personal influences, but not
trying to have any other sound than our own. The members of the band
come from different musical backgrounds, so we decided to respect
those differences, and grow from them. I know that it is hard to put
our materiel into a category, but maybe that is what makes it rich
and original. Personally, I am a huge fan of Emmylou Harris and the
Dixie Chicks, and I believe that those influences shine through in
the arrangements. But I usually let the song take me where it wants
to go, even if it is off the beaten path. One song „Valentine“
was written by the bass player, JP Benlian, just after he bought his
first upright bass. It has a road-movie type feel to it, and I
really enjoyed writing the words to that one, making me think out of
the box! „Rode Hard“, the first song on the album, is more in a
new country feel, a driving guitar and pumped up lyrics! The last
song, „Gimme Gimme“ has a bluesy sound, with really country girl
lyrics. I love shaking it up a little!

Lamitschka:  Who inspires
you musically and how deep do your musical roots run?

Liane Edwards:  Lots
of artists inspire me, the list would be too long! As I mentionned,
Emmylou and the Dixie Chicks, but to name a few others; Montgomery
Gentry, Travis Tritt, as well as some of the newer artists like
Miranda Lambert and Reckless Kelly. I listened to country and
bluegrass when I was young, when my parents would drag me to
bluegrass jams and gospel shows throughout North Carolina. When I
was a teenager, I stopped listening to any form of country, and
turned to FM pop, like most young people. I came back to my roots in
my 20’s, when listening to Emmylou made me feel like I was home
again. I really don’t know if I could write anything other than
country. I enjoy listening to current US rock, as well as other
styles, but I am a country girl, born and bred.

Lamitschka:  As an artist,
you so many tasks such as recording, touring, interviews. What do you
like best, what’s your favorite activity?

Liane Edwards:  I love the stage. When I get behind that
microphone, there is no place I’d rather be. But I really enjoyed
recording this time around too, it is a very different experience
than working the crowd! It requires another approach to the songs,
and you can’t just count on the energy of a live show. Interviews
are fun, especially when the journalists have more original questions
than where I come from and what I think of line-dancing in Europe !
But all in all, the stage is the most important part for me. It is
where we meet the people, try out new songs, and try to spread the
happiness!

Lamitschka:  When you get
time off, how do you like to relax?

Liane Edwards:  I
live most of the year in a beautiful part of France, Ardèche. So if
I am not on the road, I am either in Ardèche or back in NC. Ardèche
is a beautiful, rugged place, and my home is a haven to me. I love
to travel, and outside of music, I have visited 20 countries at
least. I enjoy reading and jogging, both allow me to center myself,
because I am a high speed person that has to force myself to slow
down sometimes.

Lamitschka:  Is there any
place you haven’t played that you would like to?

Liane Edwards:  To
start, Germany! I have toured alot in France, Holland, Belgium,
Switzerland, and a few times in the UK and Spain, but I haven’t yet
had the opportunity to see the Germans from up on the stage. I love
discovering new crowds and different cultures. It is one of the best
parts of this job! Every country has its own reactions to live
shows, they can be low key, or expectant,
wild and crazy, just listening with a beer or barely listening at
all. You have to adapt your song list and try to feel out the crowd
as much as possible. Italy would be another choice, to see if they
are as lively as the Spanish!

Lamitschka:  What’s the
best compliment a fan has ever given you?

Liane Edwards:  That one is hard to answer. Fans can be such
devoted people, it really touches me to know that they think so
highly of me, when I feel like I don’t deserve it. One young woman
told me that seeing me on stage healed her like hours of
chemotherapy, that she could forget her cancer for a little while.
How can you hear something like that and not feel burdened by the
fact that you haven’t done enough? I have a whole collection of
artwork that children have made for me, and I have a special place in
my house for the various gifts ( stuffed animals, dragonflies,
paintings,etc) that I received throughout the years. I appreciate
each and every one. We used to have a guest book on the old website,
that unfortunately got lost in the shuffle when we changed
webmasters. It was incredible to read all the uplifting and amazing
things the spectators had to say. By the way, we put a new guest book
on the website last autumn: www.lianeedwards.com,
but these days people seem to prefer leaving messages on our
Facebook. I guess that is what social networking is all about….

Lamitschka:  Fans are
always hungry for good road stories. Do you have one you can share
with us (come on don’t be shy)?

Liane Edwards:
Hmm, how about the time that we showed up for a concert, and
discovered it was in a nudist colony? I mean, they could have warned
us, at least! Of course, the boys were mostly afraid that they were
going to have to play naked, which was not the case! LOL Or how
about the time that after a show in the west of France, we drove all
night to a festival in Switzerland and upon arrival the guy asked us
if we really wanted to play? Of course, we did the show, under a
huge tent set up for 5000 people, with only 7 spectators.
It was freezing cold, and that was one of the hardest shows I ever
had to do. Some people just don’t understand that organizing
a festival is no laughing matter. If you don’t get out the
publicity, the people won’t come.