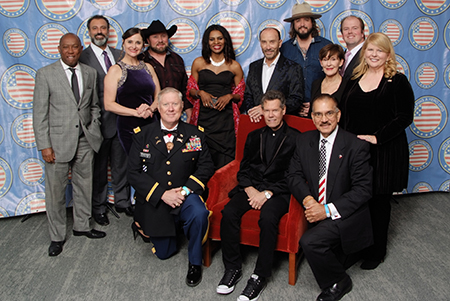 Country Music Hall of Fame member Randy Travis was honored with the Lee Greenwood Award by the 501(c)3 organization, Helping A Hero, at their Lee Greenwood & Friends
concert in Houston on Monday. The concert celebrated Christmas and
patriotism while honoring and raising money to build homes for wounded
warriors.

The
event was held at Houston Baptist University on Monday evening. The
reception and silent auction was followed by the concert program,
featuring performances by special guests and awards;Scooter Brown Band sang songs from their album American Son including the title track, Tate Stevens performed his acclaimed song “Ordinary Angels” among others, Gavin DeGraw performed many of his hits including the fitting “Soldier” and Lee Greenwood wowed the crowd with a rendition of his iconic “God Bless the USA.” SSG Shilo Harris, a retired military veteran, received the Pillar Award. Honorary Co-Chairs of the event were the Honorable and Mrs. Ted Cruz and the Honorable Adrian Garcia.

“Randy
Travis has done so much for our troops over the years having done five
USO tours and otherwise entertaining and honoring them in a variety of
ways. We are thrilled to be able to recognize him for his continued
efforts and salute his enormous talents,” said Meredith Iler, Chairman
Emeritus of Helping A Hero.

“As a
combat veteran, it means the world to me that Helping A Hero is serving
veterans who have sacrificed for our freedom. Tonight was a celebration
of decades of music, with various genres represented – we were glad to
be a part of it,” said Scooter Brown.

With lifetime sales in excess of 25 million,Randy Travis
is one of the biggest multi-genre record sellers of all time and a
recent inductee into the Country Music Hall of Fame class of 2016. His
honors include seven Grammy Awards, 10 Academy of Country Music
statuettes, 10 American Music Awards, two People’s Choice awards, seven
Music City News awards, eight Dove Awards from the Gospel Music
Association and five Country Music Association honors. In addition,
three of his performances earned CMA Song of the Year honors: “On the
Other Hand” (1986), “Forever and Ever Amen” (1987) and “Three Wooden
Crosses” (2002). To date, he has 18 No. 1 singles, 29 Top-10 smashes and
more than 40 appearances in feature films and television shows to his
credit. Ten of his albums are Gold Records. Eight are Platinum. Two have
gone Double Platinum. One is Triple Platinum and another is Quintuple
Platinum. In 2004, Randy was honored with his own star in the Hollywood
Walk of Fame and is honored on the Music City Walk of Fame in Nashville,
TN. He has been a member of the cast of the Grand Ole Opry since 1986.
In 2017, Randy was honored with a wax figure at Madame
Tussauds™Nashville. Since his near fatal stroke in 2013, with the help
of his wife Mary and rigorous physical therapy, Randy continues to make
improvements in his speaking, walking, and yes, singing. For more
information please visit randytravis.com.

About Helping A Hero

Helping a Hero
is a 501(c)(3) non profit, non-partisan organization, founded in 2006,
that provides support for military personnel severely injured in the war
on terror. Our principal activity is to provide specially adapted homes
for qualifying service members through partnerships made with the
builders, developers, communities, and the veteran. Helping a Hero
strives to engage the community in providing services and resources for
our wounded heroes and their families. Additionally, Helping a Hero
provides additional support programs such as marriage retreats,
caregiver retreats, recreational activities, emotional support, and
financial support. More information on the organization can be found at www.helpingahero.org.

After
four years and three months, two tours overseas with one tour of combat
in Iraq as a United States Marine, Scott Brown traded his guns in for
guitars and hit the road.Scooter Brown Band was
formed in 2005 and played mainly in and around Houston, Texas. It
wasn’t until 2009 with the release of their first studio album, Between Hell & Texas, that they gained a notable presence in the Texas music scene. In 2010, Scooter Brown Band put out the album Live at Big Texas. In 2013, they followed up with their next studio album, Valor,
and a self-titled album, Scooter Brown Band, in 2015. The band has
toured the U.S., headlining shows and opening for some of the biggest
names in the business including Charlie Daniels Band, Travis Tritt, Lee
Roy Parnell and the Marshall Tucker Band, just to name a few. With two
of the members being prior military, the band spends a lot of time doing
work for Veteran Support Organizations like Base Camp 40 – Warriors in
the Wild, Lone Survivor Foundation, and the Chris Kyle Frog Foundation.
Defined as modern southern rock, the band released American Son in August 2017 and was named by Rolling Stone as a country “Artist to Watch” in December 2017. For more information, visit www.scooterbrownband.com.

Photo courtesy of Helping A Hero