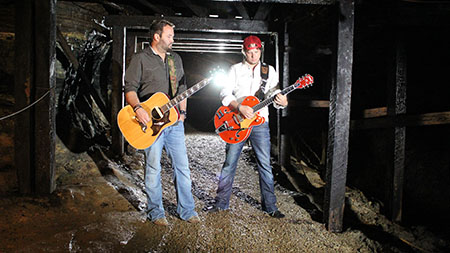 NASHVILLE, Tenn. (March 17, 2016) – Newly resurrected Hazard, Kentucky-bred country music duo Halfway To Hazard
(“Daisy,” “Devil And The Cross”) has released a new music video
recounting the life of one of Kentucky’s most feared outlaws of the
1800s — “Bad Tom” Smith. The song is a preview of what’s to come on the
duo’s forthcoming brand new album that’s currently being recorded —
the first since a personal hiatus in 2009. In support, Halfway To Hazard
announces their 2016 REDEMPTION TOUR hitting major markets nationwide.

The scandal-singed single, “American Outlaw,” was written by the
duo’s Chad Warrix and David Tolliver alongside Matt Alderman. It will
serve as the theme song for a forthcoming documentary produced by
Showhouse Productions about the real “Bad Tom” and his tumultuous life,
including confessions for the murders of many Eversole supporters during
the French-Eversole Feud. Much of the feud took place in the backdrop
of Chad and David’s hometowns in the 1800s. View the music video for the
song, produced by Matt McClure, David Tolliver and Chad Warrix, by
clicking here.

“David and I are proud of our heritage and continue to be huge
supporters of anything Kentucky related,” said Warrix. “We’ve always
been intrigued by the outlaw characters of the Wild West, so this is
kind of our way of delving into that intrigue in the backdrop of our
home state. Halfway To Hazard is more than ready for our comeback and
this project favorite is an opportunity to tell the story of ‘Bad Tom’
Smith through our music.”

“We had a great time filming the video and getting into our
characters through costumes, bar fight scenes and gun slingin’. I think
my favorite part was watching David attempt to ride a horse! We hope the
music video along with the forthcoming documentary will give people a
real sense of the rustic life in Eastern Kentucky in the late 1800s,” he
added.

Born in 1859, the formidable “Bad Tom” Smith lived a life of crime in
Eastern Kentucky and escaped prosecution of those crimes, including
multiple murders, for many years by threatening witnesses. He was
eventually arrested and convicted for the murder of Dr. Robert Rader
from Jackson, Kentucky and on June 28, 1895, was hung for taking Dr.
Rader’s life. Smith’s execution marks the first and last hanging ever to
take place in Breathitt County, Kentucky.

Halfway To Hazard rose to fame after signing to a record deal with
Mercury Records, thanks to help from their long-time supporter Tim
McGraw and a passionate national fan base. In 2007, they celebrated
their hit single “Daisy,” and performed on Tim McGraw and Faith Hill’s Soul2Soul II tour, which served as the backdrop in their music video for “Countrified,” (featuring McGraw), followed by the Live Your Voice Tour with
McGraw and Jason Aldean. Their second single, “Devil And The Cross,”
came after the release of their critically acclaimed self-titled album.
Two years later, Halfway To Hazard parted ways with Mercury and
independently released their second studio album Come On Time.

After a multi-year career break paved with personal struggles and
conviction, the duo nearly closed the book on their dreams. But
persistent coercion from their supportive peers, passionate fans and
team of believers pushed Chad Warrix and David Tolliver to overcome the
bitterness of their past and reunite in 2015 by playing multiple shows,
charity events and collaborating in the studio working on the third
studio album. They released a new single, “Heaven On Down The Highway”
in September 2015 and the song proved to mark their official “comeback”
in country music, garnering national airplay on SiriusXM’s The Highway
and widespread fan support. A documentary is currently being filmed
about their life and career, suitably called Redemption. The documentary is slated for release in 2016. View the video teaser for the new film here.

“American Outlaw” will be available for download on iTunes in coming weeks.

Catch Halfway To Hazard on their 2016 REDEMPTION TOUR performing
dates stretching from Kentucky to Montana to Wisconsin to Florida.

For a full list of upcoming dates, please visit halfwaytohazard.com or see below.