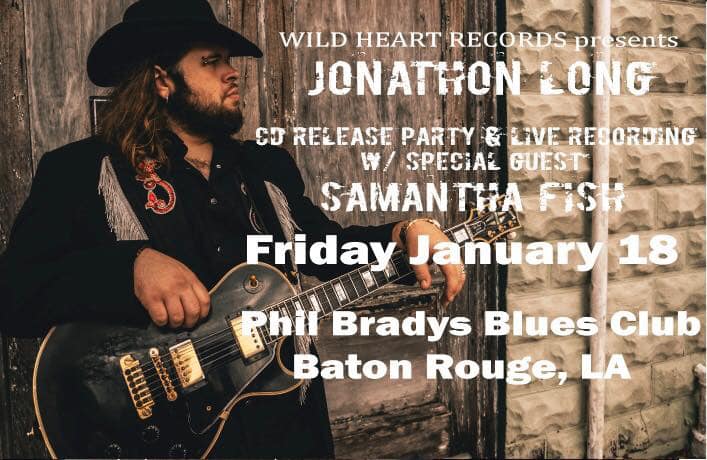 Accompanying
Long on this special night: Star blues guitarist Samantha Fish, who is
not only producing the live album, but will certainly join him onstage
that night for a song or two! Fish previously produced and released
Long’s well-received 2018 album, Jonathon Long, on her Wild Heart Records label, as she will be doing for this live recording.

Long’s new video “Pray For Me” was recently exclusively premiered by Vintage Guitar Magazine. As their Video Of The Week, Rock And Blues Muse
writes, “With a distinct blues-rock vibe, Long integrates interesting
chord changes and scorching vocals. Don’t miss the brief acoustic,
stripped down part of the song at the tail end of the track. It’s
beautiful.”

What would the music world be like if we lost the innovators, the
musical risk seekers, musicians that change the game and lift the bar
higher & higher? Jonathon Long is just that. There is nothing
stagnate about the Baton Rouge, LA-based musician’s art. The guitar
pours just as effortlessly as the soul of his voice and the depth of his
lyrics throughout his new recording. On this self-titled release
Jonathon covers the Soul Blues/Rock spectrum. You get the burning guitar
and pristine vocals – eleven songs qualifying him as one of the most
prolific writers on the scene. “Immediately I felt the songs cut
straight to your soul with a fiery command of the guitar that left
everyone’s jaws on the floor,” says producer, Samantha Fish.

The opening song “Bury Me” delivers a message of being remembered for
your actions. Long holds nothing back. It is fire and brimstone, thunder
and lightning from start to finish, setting the pace for the rest of
the album. When it comes to guitar, Jonathon is a brawler but on “The
Light” he delivers delicately with  layers that evoke serious emotion,
bringing out the spiritual guide in Long. Showing his chops aren’t only
meant for electric guitar; indeed, as a vocalist he can compete with
legendary crooners.

Samantha Fish lays guitar down on the album’s opening track “Pray For
Me” and again hitting a home run sonic-ally on the Al Green-ish “That’s
When I Knew.” While it’s Long’s soulful style that remains the star in
each song, Fish adds an atmosphere and pulsating back drop, taking the
songs to their highest level. Jonathon and Samantha trade verses on “The
River”, the only cover song on the recording. On the haunting Kenny
Tudrick (Kid Rock, Detroit Cobras) song “The River,” both Samantha and
Jonathon’s guitars together build an intensity that pushes the
desperation of the lyrics to the forefront, while creating the perfect
background as this broken love story twists and turns from mellow to
turbulent.

On
the closing track, Long doesn’t allow you forget that he’s a guitar
player’s guitar player, turning it up for the blues-y track, “Pray For
Me.”  He turns up the acrobatics while maintaining steady control like a
master of Southern Blues Rock.

Jonathon Long delivers eleven great songs creating a joyful musical
journey for any fan of Blues Rock, Classic Rock, or burning guitar. If
you’ve seen him perform live you already know this; if you haven’t, get
hip and don’t miss it. Long will be touring the U.S. throughout 2019.