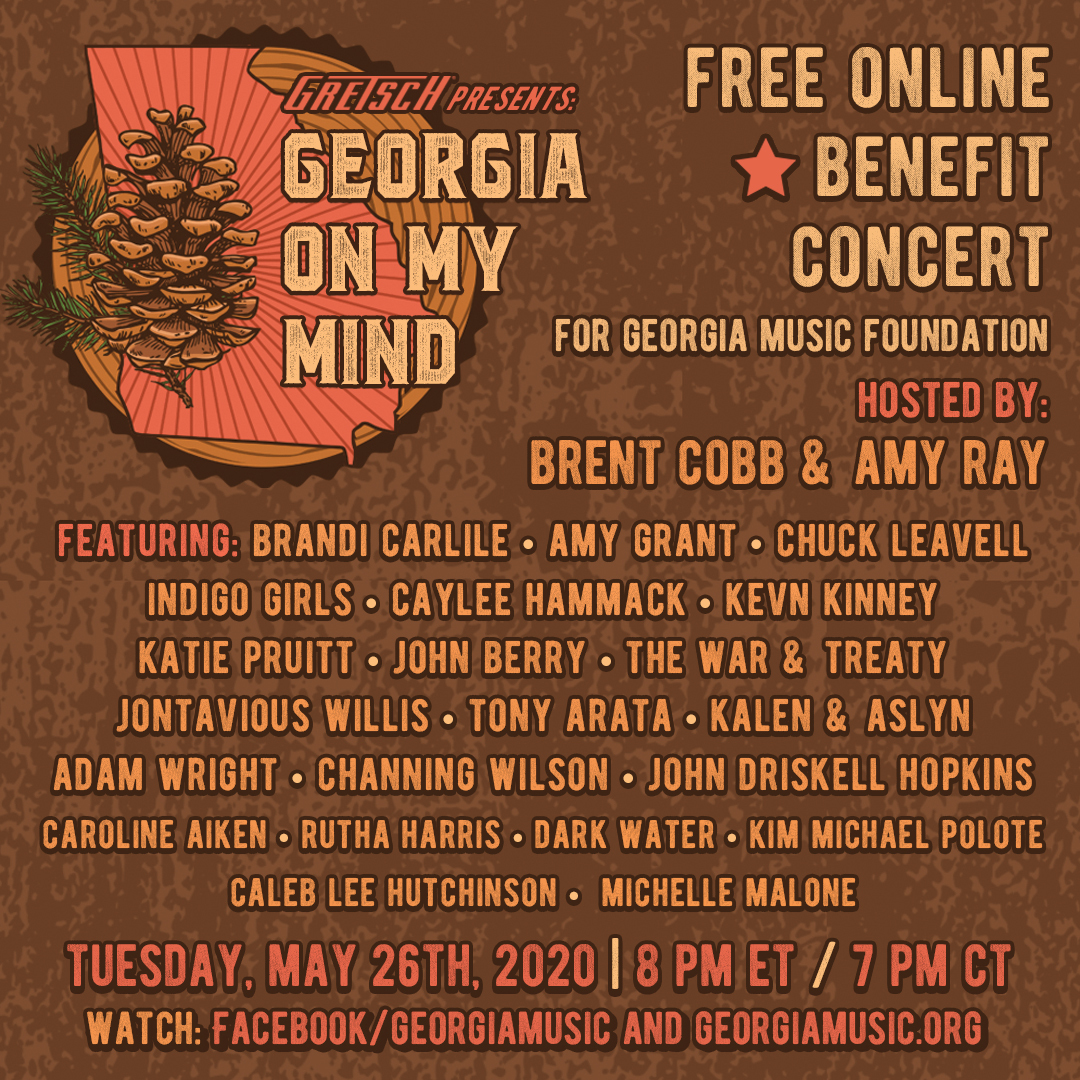 More artists have been added to the seventh annual “Gretsch Presents Georgia On My Mind” online
concert benefiting the Georgia Music Foundation. The streaming
fundraiser will be hosted by Georgia-born musicians – artist/songwriter Brent Cobb and Amy Ray of the Indigo Girls – and held Tuesday, May 26(8:00 PM/ET; 7:00 PM/CT) via facebook.com/georgiamusic and georgiamusic.org.

“I’ve been fortunate enough to be friends
with the folks over at The Georgia Music Foundation for the last seven
years,” said Cobb. “They do a lot of good for our state. It’s an honor
to host this year’s event along with Amy Ray. We hope to bring a little
southern comfort into everyone’s homes during this time.”

“Georgia On My Mind” is usually held at the historic Ryman Auditorium in
Nashville. The city is a home-away-from-home for numerous Georgia-born
singers and songwriters including former hosts The Peach Pickers (Rhett
Akins, Dallas Davidson, and Ben Hayslip), who had already turned the
reins over to Cobb and Ray this year. But concerns for public safety and
stopping the potential spread of COVID-19 prompted organizers to
reimagine the charitable event this year as an online affair.

“Moving the event to an online fundraiser made perfect sense because
more artists could participate and many more people could experience the
amazing talent that comes from Georgia – or wishes they did,” chuckled Lisa Love, Director
of the Georgia Music Foundation. “At times like this, community is
central to who we are – and it is this generous community that makes us
stronger.”

The Gretsch Company, a fourth-generation musical instruments company
headquartered in Pooler, GA, just outside Savannah, is a valued partner
in the endeavor. Executive Vice President/CFO Dinah Gretsch,
who is also a member of the Board of Directors for the Georgia Music
Foundation explained, “The proceeds fund the Foundation’s annual grants
for music programs at schools and non-profit organizations all over the
state. My husband, Fred, and I believe that the music industry and
non-profit organizations like this one will need our support now more
than ever, and we’re proud to make it possible to take this concert
online and share it with even more people.”

Directed by photographer/filmmaker Curtis Wayne Millard, “Gretsch Presents Georgia On My Mind” will be streamed on facebook.com/georgiamusic and georgiamusic.org. The
streaming fundraiser will be a musical and visual love letter to the
Peach State, the Georgia Music Foundation, and the programs that are
beneficiaries of the funds throughout the state.

AMY RAY: Back in high school in Atlanta, Amy Ray teamed
up with friend Emily Saliers to form a duo that would become the Indigo
Girls. Rooted in shared passions for harmony and justice, the pair has
forged a career spanning 20 albums and combining artistry and activism
to push against every boundary and box anyone tries to put them in. On
May 22, the Indigo Girls will release Look Long, their first
studio album in five years. On her own, Ray has released six solo studio
albums and three live ones, from the political punk of 2001’s Stagto the feminist Americana of 2018’s Holler.
Each effort seems to lean into her influences in different ways,
whether it’s the Allman Brothers or the Carter Family. Ray continues to
run Daemon Records, the non-for-profit label she formed in 1990 to
support grassroots artists including Kristen Hall, the Rock-A-Teens, and
more. With Daemon, as with everything she does, Ray aims to give
something back to the community from which she has gotten so much.

BRENT COBB: From early tunes like “Richland” to the country-funk of his 2018 studio album Providence Canyon,
Georgia has always figured prominently in the music of Brent Cobb. Born
in Americus and raised in a musical family in nearby Ellaville, the
singer/songwriter’s 2016 breakthrough major label debut, Shine On Rainy Day, was nominated for a Best Americana Album at the 60thGrammy Awards. That effort, as well as Providence Canyon, which earned praise from Rolling Stone, Faderand
NPR Music, was recorded with his cousin, Grammy-winning producer Dave
Cobb. Brent Cobb is also widely respected as a songwriter with cuts
garnered by Luke Bryan, Miranda Lambert, Little Big Town, Kenny Chesney,
and more. In 2019, he toured with Chris Stapleton, headlined his own
“Sucker for a Good Time” tour and premiered “Come Home Soon,” a video
series he called “a love letter to Georgia.” Cobb recently reissued his
2006 independently released album, No Place Left to Leave, on his own Ol’ Buddy Records.