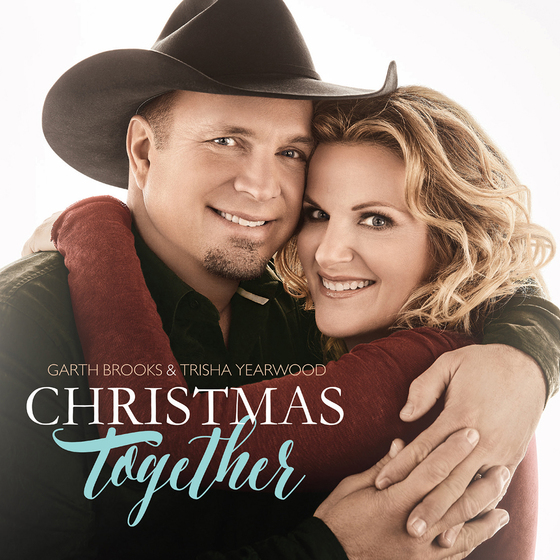 
Nashville, TN – Nov. 11, 2016 – CMA “Entertainer of the Year” Garth Brooks and Trisha Yearwood’s first-ever collaborative album CHRISTMAS TOGETHER
(Pearl Records, Inc, Gwendolyn Records, LLC) is available today. The
new festive collection features duets, solo performances and special
guests. The 11-track disc is a unique collection with a mix of original
songs and classic hits. The pair offers their take on holiday favorites
with renditions of songs such as “Baby It’s Cold Outside” and “Santa
Baby,” while also introducing new soon-to-be classics, such as the
playful “Ugly Christmas Sweater,” the heartfelt “Merry Christmas Means I
Love You” and “What I’m Thankful For (The Thanksgiving Song)” featuring
James Taylor. The album is available at Amazon  and Target now.

Yearwood appeared on The Chew yesterday, while Brooks will stop by The View (ABC)
on Nov. 21 at 11am ET. The two will join forces for a stacked schedule
of national TV appearances leading up to the holidays, starting with Good Morning America
on Nov. 24, as well as a second appearance on Dec. 23, as celebrations
commence.  Fans can also catch them for yuletide appearances Christmas in Rockefeller Center on NBC on Nov. 30 at 7pm CT and Live With Kelly on Dec. 21 on ABC at 9am CT.  They will also appear on multiple Disney holiday specials including The Wonderful World of Disney: Magical Holiday Celebration (ABC) on Nov. 24 at 8pm ET, Disney Parks Presents: A Descendants Magical Holiday Celebration (Disney) on Nov. 25 at 8pm ET and The Disney Parks’ Magical Christmas Celebration (ABC) on Christmas Day at 9am ET.

About Garth Brooks
Garth Brooks just won Entertainer of the Year at the CMA Awards for a
fifth time, a first for any artist. He is also the first artist in
history to receive 7 Diamond awards for the now seven albums certified
by the RIAA at over 10 million album sales each and remains the
#1-selling solo artist in U.S. history certified by the RIAA with over
138 million album sales. He has received every accolade the recording
industry can bestow on an artist. Garth has been inducted into the
International Songwriters Hall of Fame in New York, the Nashville
Songwriters Hall of Fame, Country Music Hall of Fame and most recently,
the Musicians Hall of Fame. Garth is currently on the three year Garth
Brooks World Tour with Trisha Yearwood. In two years the tour is
approaching 5 MILLION tickets sold, making it the biggest tour in the
world. He also has just released a new boxed set, GARTH BROOKS: THE
ULTIMATE COLLECTION, exclusively through Target, a new studio album,
GUNSLINGER, which is included in the boxed set and his first ever duets
album with Trisha Yearwood, CHRISTMAS TOGETHER.