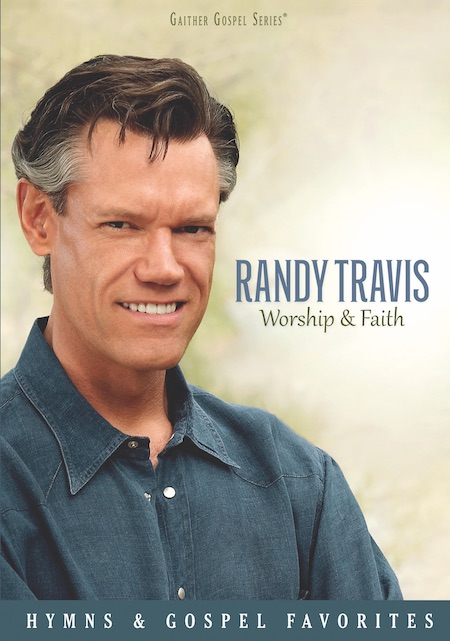 Gaither Music Group announced- today- that they will release a compilation of worship songs and hymns from seven-time GRAMMY winner Randy Travis with an album titled Precious Memories and an accompanying DVD entitled “Worship & Faith.” Filmed
in 2003 at Calvary Assembly of God in Orlando, Fla., Travis and his
band performed songs including “I’ll Fly Away,” “Three Wooden Crosses”
and “Just a Closer Walk With Thee” among other favorites. The newly
re-packaged album includes songs such as “How Great Thou Art,” “Softly
and Tenderly” and “The Unclouded Day.” The package is available for preorder now and will be released on February 21.

Travis
is no stranger to Gospel music having released the smash hit “Three
Wooden Crosses” in 2002. The song became his sixteenth number one single
winning Song of the Year at the 2003 CMA Awards and Country Song of the
Year at the 2004 Dove Awards. It was his first entry in the Top 40 on
the Billboard Hot 100 Chart. He has released four Gospel albums which
all charted on the Billboard Country charts; with three of them also
charting on the All-Genre and Christian Album Charts.

The recordings will be featured as a TV special on networks
including PBS, TBN, RFD-TV, DirecTV, DISH TV, GaitherTV, FamilyNet, The
Heartland Network, CTN, GMC, GMTN, Guardian, Liberty, TCT and TLN.  It
will air in Canada on Vision TV, CTS, The Miracle Channel and Hope
TV. The “Worship & Faith” DVD and Precious Memories CD
are exclusively distributed by Capitol Christian
Distribution and Universal Music and will be available throughout
general market stores and the Christian marketplace in addition to
Cracker Barrel Old Country Store®. The products will be available with
prime positioning at online retailers including iTunes, YouTube,
Pandora, Apple Music, Amazon Music, Spotify and Gaither.com.

A new feature in the February/March issue of Cowboys & Indians, titled The Quieter Years of Randy Travis, sums
up his journey since his 2013 stroke that stole his award-winning and
universally-known voice. Along with author Ken Abraham, he released a
memoir Forever and Ever, Amen: A Memoir of Music, Faith and Braving the Storms of Life in 2019 to critical acclaim and widespread success. The book can be purchased at ForeverandEverAmenBook.com.
Last year the music icon also released two never-before-heard songs and
joined James Dupre on the road for the Music of Randy Travis Tour.

“Shall We Gather At The River?”

“You Are Worthy Of My Praise”

“Just A Closer Walk With Thee”

“Will The Circle Be Unbroken?”

“Peace In The Valley”

“Sweet By And By”

“Open The Eyes Of My Heart”

“Turn Your Radio On”

“Pray For The Fish”

With lifetime sales in excess of 25 million, Randy Travis
is one of the biggest multi-genre record sellers of all time and a
recent inductee into the Country Music Hall of Fame class of 2016. His
honors include seven Grammy Awards, 11 Academy of Country Music
statuettes, 10 American Music Awards, two People’s Choice awards, seven
Music City News awards, eight Dove Awards from the Gospel Music
Association and five Country Music Association honors. In addition,
three of his performances earned CMA Song of the Year honors: “On the
Other Hand” (1986), “Forever and Ever Amen” (1987) and “Three Wooden
Crosses” (2002). To date, he has 22 No. 1 singles, 31 Top-10 smashes and
more than 40 appearances in feature films and television shows to his
credit. Four of his albums are Gold Records. Four are Platinum. One has
gone Double Platinum. One is Triple Platinum and another is Quintuple
Platinum. In 2004, Randy was honored with his own star in the Hollywood
Walk of Fame and is honored on the Music City Walk of Fame in Nashville,
TN. He has been a member of the cast of the Grand Ole Opry since 1986.
In 2017, Randy was honored with a wax figure at Madame Tussauds™
Nashville. Since his near fatal stroke in 2013, with the help of his
wife Mary and rigorous physical therapy, Randy continues to make
improvements in his speaking, walking, and yes, singing. With the help
of author Ken Abraham, he released his critically-acclaimed memoir in
2019, Forever and Ever, Amen. For more information please visitRandyTravis.com.