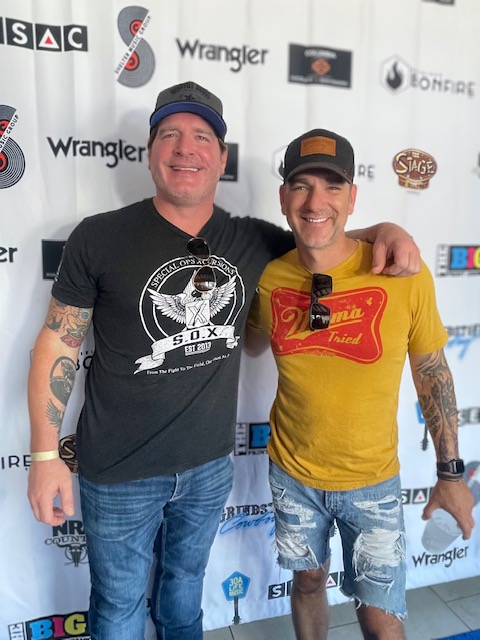 Country music fans and celebs gathered to support a great cause and enjoy fun in the sun, Tuesday, June 7, for the 8th Annual Craig Campbell Celebrity Cornhole Challenge. Again, the event served as an unofficial precursor to the CMA Music Festival, with so many country artists already gathering in Music City.

Fans were invited to bid for the opportunity to be part of sixteen teams and play alongside celebrity contestants, with all the proceeds benefitting Fight CRC, a leading advocacy organization of relentless champions of hope in the fight against colorectal cancer.

The location for this year’s event was Winner’s Bar and Grill in Nashville, followed by a performance by Craig Campbell and fellow artists in the Whiskey Jam parking lot.

Due to the pandemic, the popular Challenge had been paused for two years but was now back with a host of ‘corn stars’ assembled to toss bean bags for a good cause. Craig Campbell is the national spokesman for Fight CRC, as a way to honor the memory of his father who passed away at the age of 36 from colorectal cancer.

If you follow Craig on social media, you know that his family is his world. On a personal note, I was able to share with Craig that this was a cause close to my heart and my own family. My nephew was twelve when he lost his dad (my brother) who passed away at the age of 39 as a result of colorectal cancer and my husband Mike is a colon cancer survivor.  It is a cancer that can strike at any age and take a devastating toll on a family.

Craig vowed to keep the Cornhole Challenge going to support Fight CRC. “It is so close to my heart,” he told me.  To which I would add, “Amen!”

“I am so happy I was able to be a part of this,” said Jerrod Niemann, taking a break to grab a bottle of water. “And I am so happy that CMA is back!” he added, raising the bottle in a toast.

Zac Grace (one of my music clients @zacgracemusic) partnered up with recording artist – and Craig’s wife – Mindy Ellis Campbell (@mindyellismusic) who can be heard as her hubby’s duet partner on “Will You Marry Me.” “That girl is a true competitor,” said Zac. “We walked away with a first-round win! Craig better watch out!”

Zac said he enjoyed the camaraderie with everyone who was playing but added, “the main reason that we were all there, which was to spread the word and raise money for Fight CRC. I’m so grateful I had this opportunity.”

Watching both the tournament and the concert were free and open to the public who were invited to offer donations to Fight CRC.  Additionally, a limited number of VIP tickets were available that included a group meet-and-greet with the celebrities and a close-up view of the tournament.

“Craig is a true partner in the fight against colorectal cancer as he’s used his voice to raise awareness and create change by speaking out with his personal story,” shared Anjee Davis, Fight CRC President, prior to the tournament. “We are so excited that the Cornhole Challenge is back and bigger than ever.”

Campbell has been on the road with his Craig Campbell Tour, By God, named after his single “By God” penned by Campbell with Thomas Archer and Jordan Walker and released in February.  He has also been busy with Grindstone Cowboy, the coffee shop, restaurant and music venue he recently launched in Eagleville, TN, with his wife Mindy.  He grew up playing piano and singing in his mother’s church – an experience that served him well when he played keyboards for Tracy Byrd and Luke Bryan prior to his solo career.

More about Craig Campbell at https://www.craigcampbell.tv and @craigcampbelltv. Find information about colorectal cancer and Fight CRC at https://fightcolorectalcancer.org.