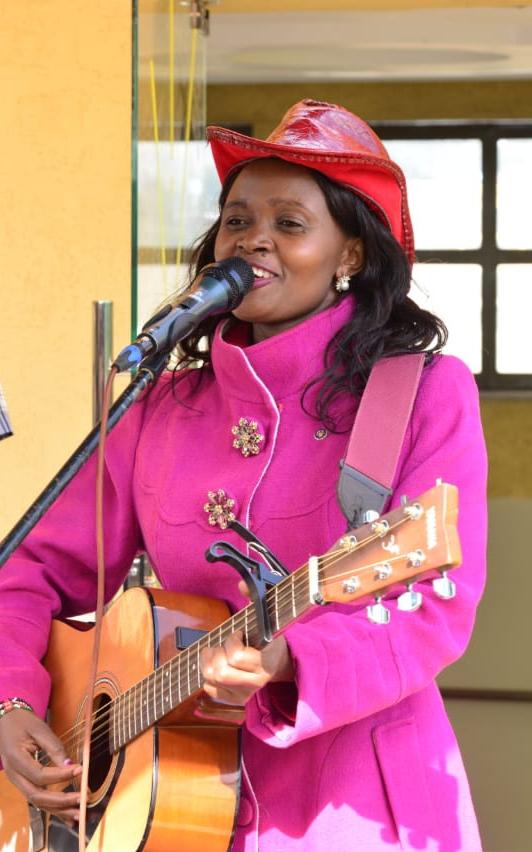 Mrs. Esther Konkara–aka Country Gal– is among the continent’s few country music artists who are striving to engender this genre of music across the African continent, which has very few singers and producers venturing into this field of music.

Despite being a female and a mother for that matter, in this male-dominated arena, Esther is not giving up, and she even aspires to reach the higher heights in country music industry.

So, who is Esther Konkara?
Mrs. Esther Konkara is a 34-year-old Kenyan gospel and country music artist who’s born ‘Esther Waturi’ in the rural village Ndeiya in Kiambu county of the East African nation of Kenya.

As she disclosed, Esther adopted the stage name ‘Konkara’ from the Biblical verse ‘we are more than conquerors’, but she gave it a little twist to sound more like a Kikuyu name {Bantu ethnic group native to Central Kenya}.

The melodious voice Gospel/Country singer, who is also a trained journalist, grew up listening to country music, thanks to her late dad who, as Esther recalled, loved to listen to the likes of Mr. Jim Reeves [August 20, 1923–July 31,1964–late American country and popular music singer-songwriter]; Ms. Skeeter Davis [an American country music singer who passed on September 19, 2004 in Nashville, Tennessee, United States]; and the American singer-songwriter, actress, philanthropist, and businesswoman Ms. Dolly Parton, among others, in the country music domain.
The Kenyan singer said storylines about love, family, life values etcetera , appealed to her heart and she, therefore, felt the need to sing along, and even write similar storylines. She had earlier sung in Sunday school, high school and in any public event that she was given the chance to; but her professional singing started in 2013 when, as the singer herself indicated, she released her first gospel album called ‘Turi ahotani’. This was an album in her vernacular language Kikuyu [an ethnic group in Kenya], but it featured two Country songs. “I had, by then, learnt to play the Rhythm Guitar in a music academy,” she recalled in her interview with this medium.
Madam Konkara has released five Gospel Albums and a few country singles. Her Rimwe Ria Kuigana song–from the third gospel album she released–means ‘God will change our lives once and for all’, according to her.
“I have participated in various country music festivals alongside other Kenyan country musicians like Elvis, Steve Rogers, etc., and I have also traveled to African countries like Nigeria, Uganda and Swaziland [Eswatini], and performed alongside country musicians from there.”
Performing in those country events have widened her fan base as well as networks in her music career; reasoning that’s why “I opened the Facebook group- Country Music Africa- that brings together presenters, musicians and also fans from across Africa to celebrate our own”.
Acknowledging music is generally a tough career for a woman, especially country music, because it’s a male-dominated industry, Mrs Konkara stated, “I play the guitar just like the men, but of course, it takes more convincing as a woman to strike a performance deal with clients”.
She, however, for the most part, sing in corporate events due to religious reasons, because, as Esther reasoned, being also a Gospel musician, she’s not comfortable being in clubs. And, that means she has fewer gigs as compared to the male musicians who have weekly or daily shows. Also, being a married woman with two small kids makes the music industry “quite tough” for Esther because she has to balance.
She noted country music has, in recent years, been receiving good reception among young people especially because young people like her  are singing the country songs as opposed to earlier years when it was viewed as music for the old folk.
The East African female country music star was featured by CNN and also Austrian Broadcasting Corporation. And, last year, in Kenya, she won two awards in her hometown Limuru; and also won ‘Artist of The Year’. Also, one of her gospel songs was the ‘Song of The Year’.
For country music to go to the level desired, Singer Esther posits the continent’s music presenters should give more airplay to local artists, while event organizers should also organize more country gigs featuring African singers to promote local talents; and tell our African stories to the rest of the world, in a country way!
Every artist needs fans to get to where he or she wants to be, and Esther is no exception. She is happy for their good reception to her music, vouching,” I am who I am because of your support and love for my music”.

One of her video songs can be found at https://youtu.be/QlXyaHwj_VI