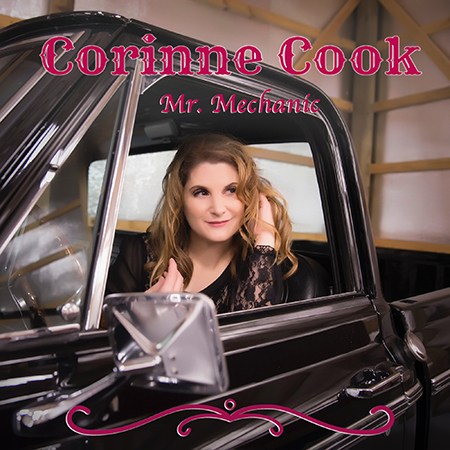 Established Country Music artist, Corinne Cook, announced the release of a lyric video for her current single “Mr Mechanic” from her current album Yes I Can. Watch the video on her Facebook artist page or on her YouTube channel here.

“I chose this song as the next single to
release as it’s a fun, quirky love song between a car and her mechanic,”
said Corinne Cook. “I wrote this song about my husband, but wanted to
play with the perspective a bit. He loves working on classic cars, so I
turned that around to show that the car also loves the mechanic and
wants his attention.”

“Cook is an artist who is definitely worth checking out and her new CD
should be enjoyed with an ice-cold beer or a shot of Jack.” – Indie
Voice / No Depression

“We give this confident, cool, and collected female artist a big HECK YEAH!” -CDX Nashville

“Mr
Mechanic,” was recorded at Denny Martin Music Studio and produced by
Denny Martin. The song is a love story from the perspective of a
neglected, classic car, imploring a mechanic to fix her up because she
still has “miles to go.”

While still engaging in a whirlwind balancing act both personally and professionally, Corinne Cook has enjoyed a handful of accolades for her previous albums. “I Don’t” from her 2015 release Dressed Up For Goodbye won a Nashville Industry Music Award (NIMA) for Song of the Year in 2016. Her debut album I’m Not Shy included
two tracks that reached the Top 5 on the Inside Country chart; #1 hit
“Uninvited Guest” and the title track, which reached #4. Cook’s current
project, Yes I Can, marks
an important breakthrough for Cook as a songwriter of great
storytelling skill and depth. The California native has been
accumulating and telling stories all her life, all grounded in her years
growing up in an intensely musical family in the Central California
towns of Tracy and Escalon. After spending 4 years in the Air Force, she
returned home to Tracy and won a singing competition, which ultimately
led to her first album. Reconnecting with her passion for singing and
performing, Corinne began singing at festivals in Northern California
and worked part time as a radio DJ for the classic country station 93.9
“The Ranch” in Ripon, CA. Fully committing to the dreams that are now
coming to fruition, Corinne moved to Nashville, to focus on developing
her career as a singer and songwriter. 2019 has brought critical success
and radio airplay for the recent single release along with the official
video for “One Box of Tissues” off the album Yes I Can. She was recently nominated in four categories by her peers for the upcoming NIMA Awards (Nashville Industry Music Awards).