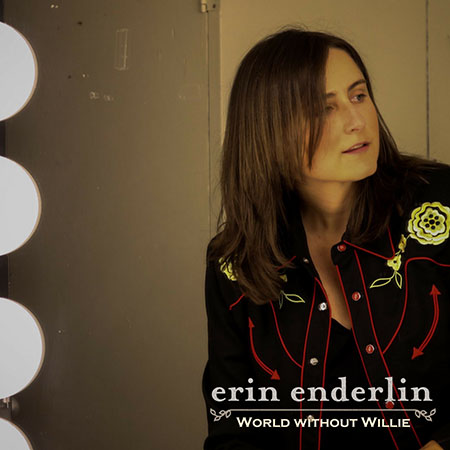 “There
are two reasons I love this song, it’s about one of my heroes Willie
Nelson, and I wrote and recorded it with some of my best friends.
Several years ago I got to go on tour with Willie and watching him every
night it just really sank in the breadth of characters and stories that
he has brought to life,” says Enderlin. “Alex, Tara and Leslie are all
such great talents and it was a lot of fun to get to write this with
them, and if that all wasn’t enough, Mickey Raphael, my favorite
harmonica player, played on the track!”

When Erin Enderlin
writes a song, more is born than melody and rhyme. Women and men leap
from her music, as fully formed and real as we are, all blood and sweat,
living, loving, killing, and dying. Produced by Jamey Johnson and
featuring Chris Stapleton, Ricky Skaggs, Jon Randall, and more,
Enderlin’s highly-anticipated sophomore album Whiskeytown Crier
puts all the sad souls she’s become known for singing and writing about
in the same tiny, fictional city. The result is unprecedented: a
concept album devoted to women’s experiences in small town, America. An
in-demand songwriter, she penned Alan Jackson’s “Monday Morning Church,”
Lee Ann Womack’s “Last Call,” and others for Luke Bryan, Randy Travis,
Terri Clark, Joey + Rory, and many more.  She was named to CMT’s Next
Women of Country class of 2018, and her critically acclaimed 2011 solo
debut and 2017’s Whiskeytown Crier have positioned her as one of county music’s brightest torch bearers. Visit www.erinenderlin.com for more.