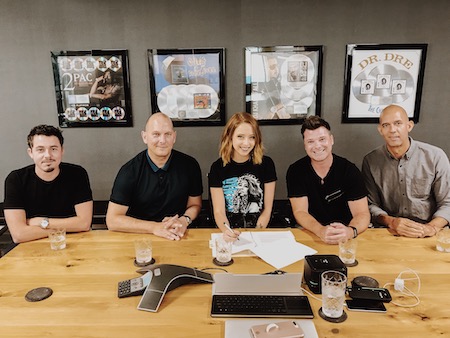 Entertainment One (“eOne”) is happy to announce an exclusive publishing deal with country artist Kalie Shorr via its joint venture with Vintern Songs.

eOne’s Global President, MusicChris Taylor,
says “We are blown away with the depth of Kalie’s songwriting ability
and are already integrating her talent with our teams in Nashville and
Los Angeles. Not only is she a fantastic artist, but we can’t wait to
utilize her work in take her work into new realms like TV and Film.”

SaidAaron Pearce,
CEO of Vintern Songs, “Kalie is an amazing triple threat
singer/songwriter/musician. She is a true artist, a fabulous writer, and
I couldn’t be more thrilled to be in business with her.”

Shorr
says, “Songwriting is my passion, both to tell my own story and help
other artists articulate theirs. As someone who writes in several
different genres, eOne and Vintern are the perfect partners to help me
take big steps in multiple directions. I feel so supported by them, both
as an artist and as a songwriter, and I’m excited to see the doors we
will open together. ”

As a
songwriter, Kalie has had songs featured in media such as Paramount’s
Yellowstone, CMT’s Nashville and the NFL, as well as recent singles by
Will Jay, Miranda Glory and Honey County. She is currently working on
multiple other projects that will be released in 2020.

Shorr
is currently on tour with LeAnn Rimes for her “You and Me and
Christmas” Tour and will be playing Nashville’s New Year’s Eve concert,Jack
Daniel’s Music City Midnight, with Keith Urban, Jason Isbell & The
400 Unit, The Struts, Amanda Shires, Bren Joy and the Fisk Jubilee
Singers.

Kalie Shorr
burst onto the Nashville music scene in 2016 with her self-penned hit
“Fight Like A Girl”. The Portland, Maine singer-songwriter became a
Sirius XM “Highway Find” and was spotlighted by Spotify, Apple Music,
CMT, Radio Disney Country, Taste of Country, and even Billboard
magazine. In 2017, Kalie released her Slingshot EP to positive
reviews and was named “New Artist You Need to Know” by Rolling Stone,
“The New Nashville” by Teen Vogue, and one of “2017’s Hottest Artists
Under 25” by Taste of Country. Named a CMT Next Women of Country and a
“Top 10 Country Artists To Watch In 2018” by the Huffington Post, Kalie
released her last EP Awake to critical acclaim and toured with
Sara Evans and RaeLynn on the CMT Next Women of Country Tour. On March
31, 2018, Kalie fulfilled a life-long dream when she made her Grand Ole
Opry debut calling it “one of the most emotional experiences of my life”
and has since gone on to play the Opry many times. In late 2018, she
headlined the Walmart/Pepsi “Road to the CMA Awards” Tour raising
awareness for the 52nd annual CMA Awards telecast. In November of that
year, Radio Disney Country launched a daily radio series called “Let The
Girls Play” hosted by Kalie and fellow Song Suffragette Savannah Keyes.
Kalie’s message of female empowerment has led to praise for her “social
advocacy” [NPR] and let to features on PBS NewsHour, NPR’s “Morning
Edition” and “On Point” in addition to ELLE Magazine. Kalie released
“2019’s best freshman country effort” [Variety] and her first-ever
full-length album Open Book in September with Rolling Stone saying “[Open Book]
showcases the alchemy that Shorr concocts which manage[s] to conjure
both Shania Twain, Red-era Taylor Swift, Dashboard Confessional, and
Alanis Morissette all at once.” She is currently on the road supporting
LeAnn Rimes’ “You And Me And Christmas” Tour this holiday season.