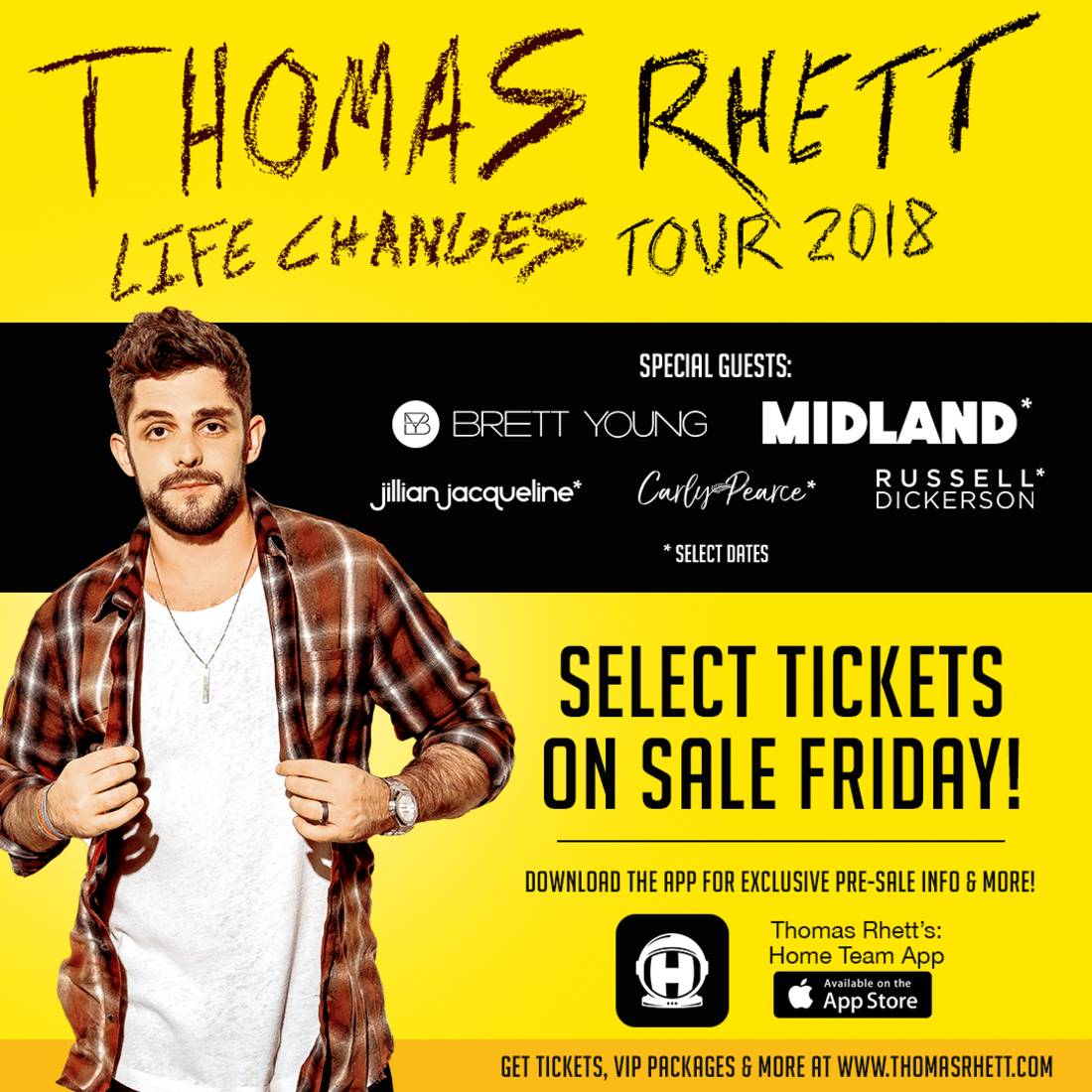 Brett Young Plus a Combination of Russell Dickerson, Jillian Jacqueline,

Nashville, TN – October 30, 2017 – Current multi-CMA nominee and ACM Awards Male Vocalist of the Year Thomas Rhett is responding to the overwhelming demand for his “forward thinking” (Sioux City Journal) live show, announcing his headlining LIFE CHANGES TOUR 2018 set
to hit 30 cities. The announcement comes as his debut headlining HOME
TEAM TOUR, “one of the best Country concerts of the year” (Peoria Star Journal), marks 27 sold out shows so far this year. The “standout” (Billboard) multi-PLATINUM artist will bring his “commanding stage presence” (Rolling Stone) to fans across the country next April with CMA New Artist of the Year nominee
Brett Young as well as a combination of Country Music’s freshest talent
including Russell Dickerson, Jillian Jacqueline and Carly Pearce. The
second leg will kick off Sept. 13 with Young and red-hot trio Midland as
support. First tickets will go on sale beginning this Friday (11/3) in
select markets at 10:00A local time on www.TicketMaster.com. Live
Nation is the tour’s official promoter and Citi® is the official
pre-sale credit card. As such, Citi® cardmembers will have access to
purchase pre-sale tickets beginning Tuesday at 10:00A local time prior
to the general public on sale through Citi’s Private Pass® program. Additional ticket information will be available in the coming weeks at www.ThomasRhett.com.

“Headlining
for the first time has been pretty unreal,” said Thomas Rhett who
launched his first headline arena tour in 2017. “It’s wild to me that
next year we will be launching our second year of headline shows and are
bringing out some of my favorite artists in music right now. I think
the fans have come to expect that we’re going to be on our feet and
having the time of our lives every single night.”

Thomas
Rhett recently released his third album LIFE CHANGES (The Valory Music
Co.), the biggest, boldest-sounding record of his career, filled with a
diverse batch of songs united by the “consistency of their craft” (Variety) as he stretches his sound to new limits. Highlighting his “detailed style of songwriting” (Rolling Stone), the new
release debuted at No. One on the all-genre Billboard 200 chart,
marking the first Country release to take the top spot in 2017. The
“expertly assembled” (All Music) album is
garnering early attention, earning his eighth career No. One as well as
his Top 5 and fastest rising single yet, the GOLD-certified
“Unforgettable.” He is currently nominated for three CMA
Awards including Male Vocalist of the Year along with Musical Event Of The Year and Music Video of the Year for the No. One GOLD-certified lead track “Craving You” as well as an AMA Award for Favorite Country Male Artist.
Thomas Rhett has earned major trophies from the Country Music
Association, Academy of Country Music, Billboard Music Awards, CMT Music
Awards and more while also drawing GRAMMY Award, American Music Award
and iHeartRadio Music Award nominations, among others. In 2018, Thomas
Rhett will also join Kenny Chesney on the Trip Around The Sun Tour. For
more information and a full list of upcoming tour dates, visit www.ThomasRhett.com.