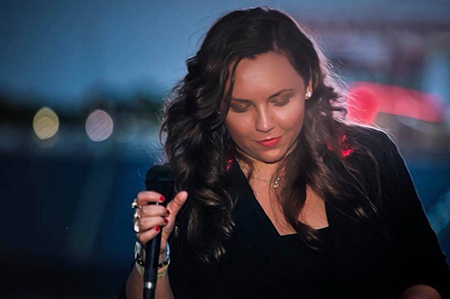 “To be nominated and recognized in so many prestigious categories by
industry professionals is truly such a huge honor for me. It is always
so humbling to see that what my team and are I doing is being recognized
in the Country Music world. The Josie Music Awards are one of my
favorite times of the year and I am looking forward to seeing so many of
my fellow artists,” says Dani-elle! “The Steamtown Music Awards are
nominated by the fans, so to have 3 nods and know that that is solely
from my fans support means more to me than they will ever know. It is
because of the fans that I get to chase this dream and do what I love.
We are on this journey together every step of the way.”

In addition to the award nominations, Miranda Lambert’s “Mutt-Nation”
Foundation has created a replica of her dog, Shyla. Pet rescue is very
important to Dani-elle and after seeing Miranda’s foundation at work
during CMA Music Fest, she wanted to take part in some small way with
the program. Their story began in June of 2010 while in Nashville, TN.
The family dog, a Maltese named Bially, was back home in PA and upon
return home, became very sick and passed suddenly from cancer. Adding to
the emotional sadness was learning of her Grandfathers diagnosis of
stage IV lung cancer. The adoption of two pound, Shyla-B (the B stands
for Bially,) not only filled the void of loss and sadness, but rescued
the family as much as they rescued her. You can purchase a replica of Shyla here and a donation will be made to “Mutt-Nation.”

“Miranda Lambert’s Mutt-Nation Foundation is an amazing group. I am
honored to share the story of how Shyla rescued both my parents and me,”
shares Dani-elle. “Knowing a part of the proceeds from the purchase of
the replica of Shyla go back to the foundation, as do all the MuttNation
stuffed animals, is an added bonus towards more contributions.”

Dani-elle continues to promote her new single “Get Back Up” released in
April 2018, a song that inspired her “Positive Youth Tour,” a series of
live shows performed at schools in Pennsylvania’s Lackawanna and
Susquehanna counties, where the concerts include segments during which
Dani-elle speaks to students about following their dreams, bullying, and
self-worth.

Dani-elle Kleha is an aspiring, performer and recording
artist from Jermyn, Pennsylvania with a sound well beyond her years.
Her voice is a combination emulating a throwback to 90’s country mixed
with a modern flair. The ability to captivate the audience from the
moment she steps on stage to the moment the crowd files out the doors,
Dani-elle always leaves her fans with a lasting impression. She has
shared the bill with artists Luke Bryan, Jason Aldean, Dierks Bentley
and more. Along with her busy schedule, Dani-elle makes time to give
back to the community. She headlines the “Positive Youth Tour,” a series
of live shows performed at schools in Pennsylvania’s Lackawanna and
Susquehanna counties, where the concerts include segments during which
Dani-elle speaks to students about following their dreams, bullying, and
self-worth. She also is the National Spokesperson for “Veteran’s Promise.”
This is only the beginning and  there is no stopping her now. Her fresh
new look and unique sound has her taking the Country Music world by
storm one song at a time. Stay current with everything Dani-elle Kleha
on her website dani-ellesings.com.