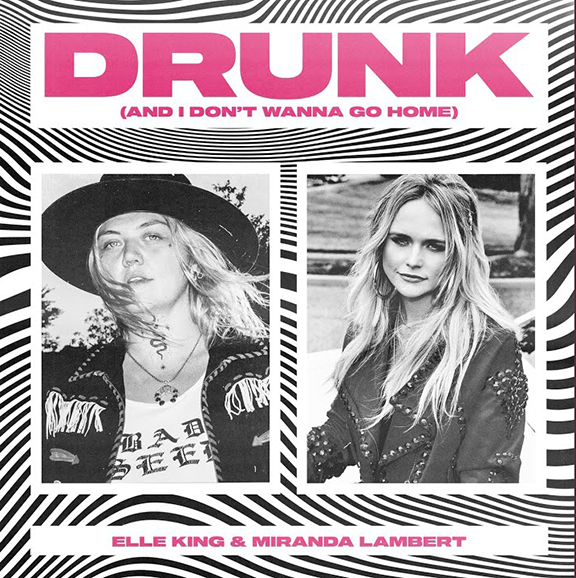 One thing is for sure: Nobody wanted to go home from the Number One party for “Drunk (And I Don’t Wanna Go Home)”.  The party was held May 25 in the lobby of BMI’s Nashville offices, having moved inside from the planned rooftop locale due to the approaching rainstorm. The chart-topping hit, performed by Elle King and Miranda Lambert, was written by King and Martin Johnson.

The song had the distinction of being the first by a female duo to top the charts since Reba McEntire and Linda Davis hit No. 1 with “Does He Love You” way back in 1993. Yes, almost thirty years ago, or in a previous century, to put it another way.

Lambert and King are close friends as well as collaborators: In 2019, Lambert invited King to be part of her Roadside Bars & Pink Guitars Tour with the goal of bringing powerful female voices to the forefront.

King began her remarks from the stage by thanking Dierks Bentley. It was Bentley who introduced King to the majority of mainstream country fans when he featured her on his 2016 song “Different for Girls” (penned by J. T. Harding and Shane McAnally) that topped the Billboard Country Airplay charts. That track also received a 2017 Grammy nomination for Best Country Duo/Group Performance. Prior to “Different for Girls,” King was known mainly as a rock artist, having reached No. 1 on the Billboard Hot Rock Songs chart with “Ex’s and Oh’s” that earned Grammy nominations for Best Rock Performance and Best Rock Song at the 58th Grammy Awards.

“I want to say thank you to Dierks Bentley for bringing me into this world that has absolutely changed my life,” she said.

King also expressed her gratitude to Lambert. “Miranda, I had nothing on radio, and [you] asked me to come on tour because you liked me,” she said, adding, “I think it’s because you wanted someone to drink with, right? Let’s be honest!”

Addressing her co-writer and the song’s producer Martin Johnson, King said, “Martin, we wrote this song nearly ten years ago and sometimes things have a journey of their own. I never knew it was waiting for Miranda Lambert.”

Thanking Lambert for recording the song and including her as a duet partner, King described “Drunk” as a light, fun song, something people needed after the pandemic, adding, “What we need is a freakin’ anthem about not wanting to be stuck inside.”

In his remarks, Martin Johnson said, “The true rock star, in 2022, is a dying breed and it makes me really, really sad.”  As a musician, Johnson is striving to keep rock music alive, fronting the rock band Boys Like Girls that has sold over one million albums and racked up more than a hundred and twenty million plays on MySpace. He also leads the new wave band, The Night Game.

As a songwriter and producer, Johnson has worked with major acts including Taylor Swift, Avril Lavigne, Daughtry, Lady A and Gavin Degraw and has racked up several RIAA-certified multi-platinum tracks. Songs that he has written or co-written have sold more than ten million copies and he is credited with nine Top 40-charting singles.

Lambert graciously made sure the event was all about Elle King and Martin Johnson, in the spirit of Number One parties celebrating the song’s writers rather than the performer. She said, “Thanks, everyone, for pushing this whole ‘women in country music’ thing. I’m so sick of talking about it, but guess what? We don’t have to anymore because we are number one.” The room roared its approval.

Watch the official (and funny!) music video for “Drunk” at YouTube here https://www.youtube.com/watch?v=CS9zbWLiI0o

Elle King will join her friend Dierks Bentley to host CMA Fest, a three-hour primetime TV special set to air August 3 on ABC-TV. The show will focus on performances recorded during the CMA Fest, June 9 – 12. This will mark the hosting debut for both King and Bentley for the CMA Fest TV special.