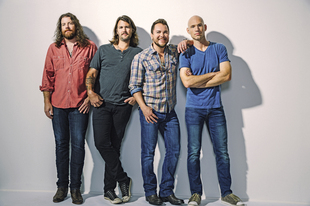 ELI YOUNG BAND RELEASES NEW SINGLE “NEVER LAND” OFF OF UPCOMING STUDIO ALBUM FINGERPRINTS
“NEVER LAND” SPINNING ON SIRIUSXM’S THE HIGHWAY NOW WITH EXCLUSIVE VIDEO PREMIERE ON ETONLINE.COM
Nashville, TN — June 9, 2017 —
The Valory Music Co. chart toppers Eli Young Band announced the release
of their fresh new single “Never Land” this morning. The song from
their forthcoming release FINGERPRINTS is spinning on SiriusXM’s The Highway now. In celebration of the new single, the band will co-host “Music Row Happy Hour” this afternoon with Buzz on SiriusXM The Highway.
This morning, ETOnline.com exclusively premiered the band’s new video for “Never Land,” produced by Brian Lazzaro.
Watch the video now on ETOnline.com.
“When
you fall in love for the first time, it’s like a fairy tale. Everyone
knows the feeling you get is hard to explain. Well, we tried to do just
that by borrowing from Peter Pan without making the song about the Pan
himself,” lead singer Mike Eli shares with ETOnline.com.
Written by Eli, James Young, Ross Copperman and Jon Nite, the song is a
clever play on words with an infectious groove. The band recorded the
track in Nashville with co-producers Copperman and Jeremy Stover at the
helm.
“Brian
Lazzaro has become our go-to video director over the years. He always
comes to the table with a great vision and makes videos that really
stand out. It was great to be able to shoot the video down in Texas. It
was actually a location that Brian had scouted out for a previous EYB
video that didn’t get used. We shot right along some train tracks and we
didn’t really know if or when a train would come by. It was fun to
watch everyone scramble for the shot when one came by,” bass player Jon
Jones shares with ETOnline.com.
The
band will have a chance to perform the new single for fans this morning
at CMA Music Festival when they take to the Riverstage at 10:45am CT.
They’ll also perform this afternoon at the HGTV/GAC Lodge at 5:00pm CT
prior to heading north where they will make a stop at Pocono Raceway
this weekend in Pennsylvania.
Eli Young Band’s new studio album FINGERPRINTS is set for release next Friday, June 16.
ABOUT ELI YOUNG BAND:
The
Valory Music Co.’s Eli Young Band continues to evolve musically in
fresh and exciting ways. Their new single, “Never Land,” is currently
spinning on Sirius XM’s The Highway and their new album FINGERPRINTS will
be released on June 16. With a trio of platinum and multi-platinum #1
hits like “Drunk Last Night,” “Even If It Breaks Your Heart” and “Crazy
Girl” under their belts, their last album 10,000 TOWNS ranked #1
on the Billboard Top Country Albums chart, landed a coveted Top 5 spot
on the Billboard 200 and claimed the #1 spot on the iTunes Country
Albums chart. The album earned high praise in the Associated Press saying the album, “gives plenty of reasons for cities across America to embrace them with open arms.” While Chicago Sun-Times boasted,“(EYB) continues to prove why they matter, why they REALLY matter to country music, with the release of 10,000 TOWNS.”
EYB’s chart-toppers have been awarded Billboard’s #1 Country Song of
the Year, ACM Song of the Year and garnered numerous nominations from
GRAMMY, CMA, CMT, ACA and Teen Choice Awards. They have performed on TODAY, Conan, Late
Show With David Letterman, The Tonight Show With Jay Leno, Late Night
With Jimmy Fallon, Jimmy Kimmel Live! and FOX & Friends.  While
selling out venues as a headliner from coast to coast, EYB has toured
with Kenny Chesney, Rascal Flatts, Tim McGraw, Jason Aldean, Toby Keith,
Darius Rucker and Dave Matthews Band.
For tour dates and more, visit EliYoungBand.com.