Eileen Carey at the Rose in Pasadena, CA, Thursday Night 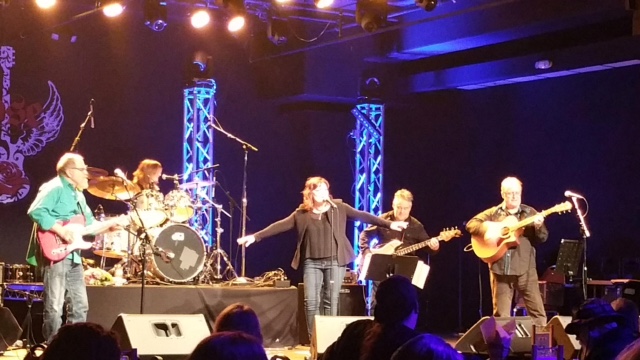 Eileen Carey at the
Rose in Pasadena, CA, Thursday Night

Having won multiple awards behind multiple nominations over
the past two years, having topped numerous radio charts and reaching the top
spot at the New Music Weekly Radio Country, Adult Contemporary and Top 40
Charts with her last three singles, Faith,
Bring on the big and the current international smash In the Air; the three songs’ music videos also boasts 135,000 Youtube views and counting, it is
not surprising that singer-songwriter Eileen Carey can arguably be deemed “the
Queen Of Indie Country-Pop.”
Carey
is a veteran! No fly-by-night, or one trick pony. She rocks, literally! Her
last CD, Let It Go, contributed six cuts to the airways and the first single
off her upcoming fifth CD release is the very best complete single of her
career, and that is a career full of great singles and radio play.
Known
for her yearly Summer and Fall tour of California’s
Fairs and Festivals, Carey has developed an excited fan base in Southern
California, and consistently outdraws
the headliners (all of Rock royalty) that she has been opening for. She
certainly has a stellar reputation in the Honky Tonks  and clubs of
Nashville that
she visits and performs a number of times a year, as well. She has honed
her show over
years and is a fully involved entertainer, so it was with anticipation
that the home town crowd came to The Rose to see Carey.
The Rose, domiciled in the internationally recognizable
Pasadena, California, with its claim to all kinds of modern wonders (Jet
Propulsion Laboratories, Cal Tech, American Baseball legend Jackie Robinson, the
Norton Simon Art Museum, The Rose Bowl, sitcoms #1 hit the Big Bang Theory is
TV located in Pasadena and much of Oscar contender the movie La La Land was
shot in Pasadena. The Rose itself is a new kid on the venue block but like all
of Sterling’s dinner theater-clubs, the Canyon Club in Agoura Hills,
Saban in Beverly Hills, etc. is a coveted room.
On that rainy and unusually cold Thursday night for Southern
California, Eileen opened for Tal Bachman, son of Randy from Bachman-Turner
Overdrive with Carl Kozlowski the entertainment editor of the Pasadena Weekly
there to see what all the noise has been about these past few years when it
came to Eileen. “Her
opening slot for pop singer Tal Bachman on Jan. 19 at The Rose
nightclub in Pasadena appeared to draw far more fans than Bachman
himself managed to attract, with the crowd of about 200 loudly roaring
their approval in multiple standing ovations”. – Carl Kozlowski,
Breaking Big, February 2017 https://www.pasadenaweekly.com/2017/02/16/breaking-big/
Carey mixes her live performance sets to pay tribute to her career of four plus
albums of material. Her material is catchy and
thought provoking. She rarely laments in song, more often she shares her
experience of positive solutions.  Her
songs seem to strike a chord with her sophisticated and economically successful
fans who identify with her positive approaches to life and love.
Carey’s line-up consisted of two guitarist, a rhythm section
and herself on her Shure mic. Her lead guitarist and music director John Groover McDuffie performs that same role
for the legendary Rita Coolidge, and is one of country music’s premier soloists.
Her drummer, Suzanne Morissette Cruz, solos with the best of them, and is the
drummer gone viral on Youtube as The
Wedding Drummer with over 1 ½ million views (Type in The Wedding Drummer on
Youtube!). Will MacGregor is every bit a match for Suzanne on his bass. Will,
known for his years playing bass for Blues legend Albert Lee, and as a member
of Chuck E. Weiss’ ensemble, is one of the most respected session players in
SoCal, and the same can be said of acoustic guitarist Al Bonhomme.
Carey walks about the stage, comments in between songs, adds
a slight anecdote to introduce each song and like her up-tempo material performs
with remarkable energy. She opened the set with Hearts of Time from her second
CD of the same name and then played through many of her fan favorites such as
Let It Go, Bottle Your Crazy Up,  That
Was Her This is Now,  He’s Not Mr. Right
He’s Mr. Right Now, Faith, and of course In The Air.
Currently, Eileen has been nominated for and you can still vote for her, Eileen Carey at the New Music Weekly Pulldown-menu Female Hot AC Artist 2017, Country Breakthrough Artist 2017 and Crossover Artist. http://newmusicweekly.com/?page_id=67190