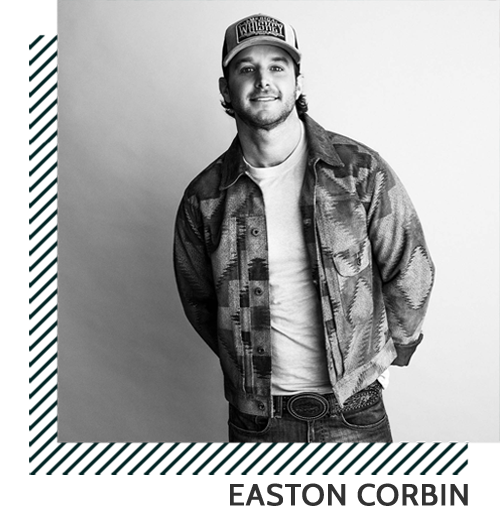 Easton Corbin’s career is on the move and in the right direction.  Earlier this year, he signed with Stone Country Records and released “Marry That Girl” (described in media as ‘swoon worthy.’ Awww!) that he performed on Fox TV’s Joe Millionaire.  Even during the Covid shutdown, Easton kept busy, releasing his EP, Didn’t Miss a Beat, and getting to perform the title track on the Today show.  He also collaborated with EDM star Lost Frequencies, adding his unmistakable baritone to “One More Night.”

With No. 1 plaques (for 2009’s “A Little More Country Than That” and 2010’s “Roll With It”) and some Gold and Platinum awards, Easton is the real deal. His current single is the happy-go-lucky uptempo love song “I Can’t Decide” (“You look so right, I can’t go wrong / I can’t decide which side of you I wanna see tonight”). Easton co-wrote the song with Wade Kirby, Ashley Gorley and Rhett Akins. Watch the lyric video at YouTube here Easton Corbin – “I Can’t Decide” – Official Lyric Video – YouTube

Like me, Easton is an FFA Future Farmers of America) alum, so it was fun to sit down and talk with him recently. I asked him about his process for choosing songs for his singles or album tracks.

“I’ve always thought the best song wins,” he stipulated. “I don’t care if the janitor wrote the thing or I wrote it. A lot of people think when they write a song that it’s the best song. I’ve always been very critical on what I write. I’m usually more critical on what I write than on outside songs.  You look at guys like Garth, he didn’t write at lot of his hits at all.  They record great songs and that translates into longevity if that makes sense.  Also I think it’s about relating to songs.  Country music is known for being real and genuine and I always think that’s a big thing about the music you record, it being genuine. I’ve turned down songs because it might be a great song but I can’t relate to it. If I sing it, I want to be able to sell it.  I write with writers every day and man, even when there’s nothing in the room, they come up with something out of the blue. I wish I could do that!

We talked about how he dealt with the difficulties of being a singer-songwriter during the long pandemic.

“I tried to use that time to write as much as I could and try to stockpile songs and ideas,” he said, adding with a wry smile, “But I will say this, I wish I’d had shares in Zoom back then!”  It’s a useful tool but it’s one of those things where writing is also a social thing and there’s something about getting together with people, one-on-one, in a room together. That energy that you have in there. Zoom is a useful thing and it helped to get together and at least write but it still doesn’t match being in a room one-on-one. As an artist, too, I think engagement with the fans during the pandemic was very important when you could do that.  When there wasn’t any live performance, I tried to utilize social media as much as I could to engage fans. We also put out new music during Covid which I think was important to give fans something to look forward to.”

Much as he enjoys co-writing with other songwriters, for Easton nothing beats the feeling of performing live.

“I love all aspects of what I do but probably my favorite is getting out there on stage,” he told me, “Especially watching the evolution of a song and how it goes up the charts or streams more and when it gets more popular and people start singing along more and more. That’s really a feeling that you’re making an impact and people like it.  That’s certainly one of my favorite parts of what I do.

I told Easton that I’ve watched videos of his live shows and there’s so much energy that I could tell right away that the fans connect with him and they’d make him sing all night if they could.  I noted that this has been a wonderful year for him.

“It’s been amazing!” he said.  “Being able to work with Benny Brown at Stone Country Records and the whole staff there, it’s just been amazing. They really support country music and, of course, that’s what I love and it feels like home.  Benny loves country music and we get along on so many levels and especially on that level when we listen to songs, like, ‘Man I really think that’s a good song,’ and he’s like, ‘Yeah, that really is a good song.’ We really connect on a song level there, with our love of country music and keeping it alive.”

Easton concluded by emphasizing the importance of working with a label and a crew that understands what truly works for you when it comes to recording and performing songs. He added, “If you record a song and you don’t like it, that’s the one that’s gonna be the single! So you’d better record the songs you like!”