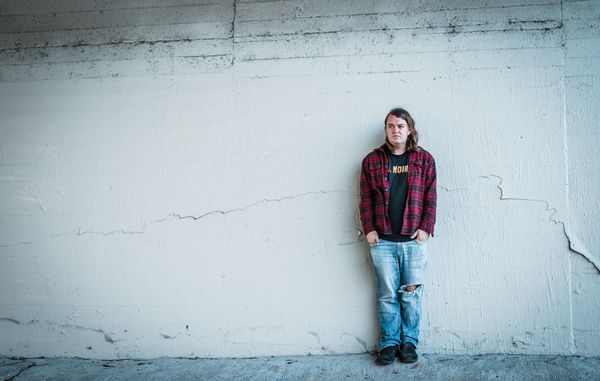 Cat’s Game features stripped down acoustic folk, Neil Young
inspired electric guitar rock, and Stooges-esque punk. Rodrigue, who
loves exploring all genres and musical forms, can jump between intimate
and quiet to loud and abrasive.  Cat’s Game falls on the side of
more intimate and acoustic, though there are some louder electric
rockers, such as “The Money Game” and “Minimize the Damage”. “My main
concern was to have no instrument get in the way of the lyrics,” he
specified.

Rodrigue began playing guitar and writing his own songs at the age of
8.  He studied classical guitar in high school and eventually obtained a
degree in songwriting and avant-garde composition from the California
Institute of the Arts (CalArts).  His professional career has shown the
same sense of adventure with this year bringing about movement and
change.

Playing guitar in 8 different bands, the artist, who considers
himself a songwriter, realized he would need to narrow his focus if he
was ever going to pursue his own music.  Now playing live shows under
his own name, he’s enlisted Marcus Hogsta (Fell Runner, Wistappear) on
bass and Robert Anderson (Cerny Brothers, Albert & His Dreamboats)
on drums.  “Having such a small group with such wonderful players has
been amazing,” he states.  “I’m finally in a place where I have a band
that feels expansive and unlimited.” Claiming that he doesn’t regret
playing in so many bands, Rodrigue says, “It’s made me a better
musician. Nonetheless, I’ve have always thought of myself as a
songwriter, rather than a guitarist.  I love playing guitar, but writing
is what I do every day and it’s what makes me strive to move forward.”

Rodrigue reluctantly notes that Cat’s Game is a breakup album.  “I almost called it The Stages of Grief
just because I realized that’s what I was going through. What I find
interesting about documenting the grieving process is that there is
nothing logical about it.  So many of the thoughts and concepts in the
album are fueled by emotion rather than critical reasoning.  This
results in something that can even be contradicting itself at times.”

Rodrigue came to Jiroudeck with 30 songs and they slowly narrowed it
down to 9.  “White Moon” kicks it off, warm song about the world written
from the Moon’s point of view.  “Self-Love” is a straight-ahead pop
song about manifesting a fictitious lover in one’s mind in order to cope
with loneliness. “Self-Love” will also be the first single from the
album.  “Some Kind of Heaven” is a simple folk song that was inspired by
his upbringing in the spiritual community of Ananda Village.  “They
told me that if we meditate every day then we will all go to heaven and
that there is a divine mother watching over all of us,” he says.  “The
idea is improbable, but it’s nice to think of an afterlife without all
the pain and suffering and heartbreak, even if it’s all bullshit.”

The vocals for “Living This Way” were recorded in a bathtub.  “It’s a
song about wanting to die and not wanting to look for hope,” he
explains.  “The most over-the-top thing we did with this was record me
kicking a chair to the ground after the line, ‘I wanna find me a rope,
knock the chair and let it go’.  It’s honestly so depressing that it
only felt natural to go that far with it.”

A cool and subtle detail is on the song, “If You’re Not My Lover”.
While recording, Jiroudeck had accidentally clinked his glass of whiskey
on his desk right before Rodrigue sings “That’s why I’m seeing that
girl from the bar”.  They liked the effect so much that they kept it.

While all of the songs showcase Rodrigue’s deeply personal lyrics,
“Minimize the Damage” is a more dynamic and epic sounding than the rest
of the record.  “If the songs on the album represent stages of grief,
this song would represent acceptance,” he says.  “It was really fun to
work on.  We spent a lot of time experimenting with Evan letting loose
on the drums and overdubbing several guitars at the end, more than any
other song.”

Cat’s Game is an introspective album and is recorded with all
live instruments. “There’s no midi,” Rodrigue explains.  “The songs lean
more toward a traditional folk sound and less towards and avant-garde
pop thing, like on my EP Scrimp. It’s not a bold statement from
the beginning.  I think it has many layers that are hopefully revealed
through multiple listens.”