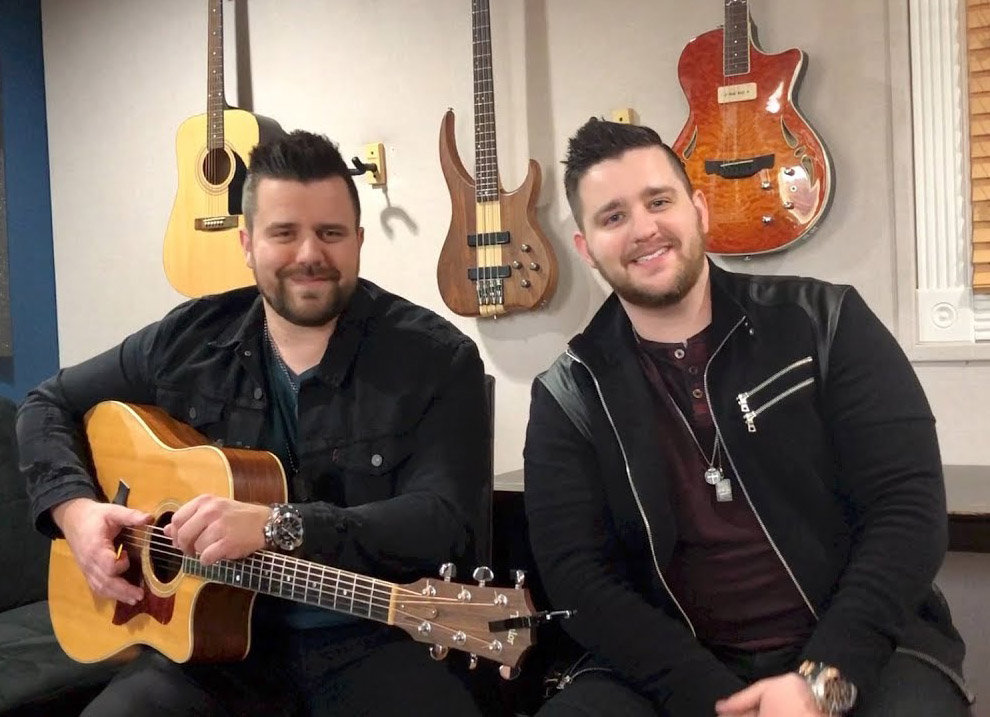 Jordan and Seth Dugger are brothers that
together form the Dugger Band.  Their
father is a pastor of a small community in the eastern part of Tennessee.  They are both graduates of the University of Tennessee
and are talented multi-instrumentalists as well as singer/songwriters.  Their current single, ‘East Tennessee Son,’
is also the title track from their current album.

As CMA Fest 2018 drew to a close, I met up
with Seth and Jordan to talk about their music and the audience reaction to
their blend of contemporary and traditional country.

Preshias Harris:  Jordan, you both grew up in Greenville in
East Tennessee, close to the Smoky Mountains.
Do you feel that affected how your music developed?

Jordan Dugger:  I think so, for sure. Most of our family are
musical.  A lot of the events we attended
with our family, a lot of people would always bring guitars and fiddles and
mandolins and all kinds of instruments to family get-togethers. So we grew up
with the family harmony stuff and everybody singing together.  Of course, growing up near Gatlinburg and
Pigeon Forge where Dolly Parton is from, we drew influence from a lot of her
music. And there’s a big Bluegrass influence and a lot of mountain music, but
also a lot of country and some of the rockin’ country as well. It’s a pretty
diverse music community in East Tennessee so that definitely influenced our
style today. The biggest part, I think, is the harmonies. And the first
instruments we were into were guitar and fiddle.

PH:
Seth, tell me about being here at CMA Fest. Is it your first time?

Seth Dugger:  We’ve been for a couple of years now.  But this year, we’ve performed the most at
CMA Fest.  It’s a great experience!  It’s cool to see all the hard-core country
music fans from all over the world come to Nashville for this one week.  A lot of our fans came in for it to sit in on
some of the fan parties that we had and hear some of our acoustic songs.  So that was really humbling for us to see all
those people from all over the world for this one event.

PH:
What was one of your favorite performances?

Seth:
They were all great for us.  I
really enjoyed playing at Alley Taps. That’s a neat venue. We played at
Martin’s BBQ, we played at South, that’s a cool place. All of them, I think,
were really good. We also had a chance to perform for one of our sponsors,
Beaman Automotive here in Nashville, so we did a concert for them at their
Toyota dealership for their employees and customers.  I think we are going to make that a yearly
thing.

PH:  Jordan,
the title track from your new album, ‘East Tennessee Son,’ feels particularly
relevant following the tragic Gatlinburg fire. Did the fire have an influence
on you, writing the song?

Jordan:
Well, it’s actually an interesting story, We wrote the song about a week
before the fires happened.  We had been
wanting to write a song about where we were from and how we could describe that
to people.  At first it started out, hey,
maybe this is just a song for us that we can sing at our hometown shows around
northeast Tennessee. Then the fires happened and when we read the lyrics afterwards,
we were, like, this seems as if we wrote it after it
happened. And so I think the song took on a greater meaning for us at that
point than when we had first written it. At first, we had thought, this is a
cool song; it might make the cut, it might not.
But after the fire happened we saw that it really fell in line with what
was happening and maybe we can use this song to help out in some way, to help
with the healing process in some small part.
In it, we pay tribute to other East Tennessee artists like Dolly and
Kenny Chesney, and references to other songs like ‘Smoky Mountain Rain’.   And
‘East Tennessee Son’ ended up being our first radio single.  It was really important for us to start out
with that.  It’s our foundation, where
we’re from.  No matter where we go, what
we do, those people where we’re from mean so much to us, and we wanted to do
every little bit we could to help.

PH:
What were your musical influences growing up? Was there one band or
genre that really influenced you?

Seth:
There were a lot of different types of music that we liked to listen to.
I know one that stands out to both my brother and me is Brad Paisley. We were
always influenced by him. Of course, Jordan plays guitar and it was the first
instrument he really pursued. He plays guitar, drums, saxophone and just
recently started playing bass. I play drums, fiddle, bass, and trumpet. So Brad
Paisley was a big influence.  When Jordan
was starting to play guitar, I saw him playing, so I pulled out my fiddle and
started playing, and we really started practicing when we were teenagers. Our
cousin saw us and said, ‘Hey, you need to check out this artist, Brad Paisley,
he’s a killer guitar player.’ So we bought a couple of his albums and started
listening. Jordan started falling in love with the guitar part and he would
play for sixteen hours a day sometimes, just learning all the guitar parts to
Brad Paisley’s records.

Seth:
And I did the same thing with the fiddle. A lot of people may not know
it, but Justin Williamson, Brad’s fiddle player, is the one that taught me to
play the fiddle [laughs]. I would sit down and learn every single song on every
Brad Paisley record.  I had a computer
program where you could slow down a fast song, and I’d slow it down and learn
every single part that was being played on there.  That’s how we learned to play our
instruments.

PH:
So you were self-taught.

Seth:
Yeah.  We took a few lessons after
that, but a lot of it was self-taught, by Brad Paisley’s records. There’s
another artist that means a lot to us, Ricky Skaggs. We learned a lot from him.
If I keep mentioning names, I’ll go on forever!

PH:
Where did you learn your harmonies?

Seth:
We learned that from our parents. Our father was full-time in Southern
Gospel music with his family when he was our age.  So it’s just been in our family, I guess, in
our family blood. When I was four years old and Jordan was seven, we sang on
our first record with our parents. That record is still out there somewhere. We’ve
got some pictures from when we were four, and seven and ten years old, singing
with our parents.  We did several records
with mom and dad and it just developed from there into something that we love
to do. That family harmony is just something that they taught us and we’ve
always sung together since we were that young.

PH:
Tell me about your school music outreach program, ‘A Dream Worth
Chasing.’

Jordan:
When were younger, there were people who came into our schools –
professional athletes, policemen, firemen, musicians, different professions –
and gave their time. I remember one time they brought in all the fire trucks
and extended the ladders and let us see all the fire equipment. That was so
cool. Other times musicians would come in and we thought that was so cool.  I think it really inspired us to chase our
dreams.  I went through a lot of dreams
growing up. At one point I wanted to be a professional basketball player, but I
only grew to  6’ 1” [1.86m] so my chances
were a little lower of making that happen. [laughs]  But I saw that other people had dreams and
actually achieved them and that was the important thing.  No matter what my dream was, because I’d seen
other people accomplish their dreams, I knew that I could do the same
thing.

PH:
How does the program work?

Jordan:
The whole point of our ‘Dream Worth Chasing’ school series is, firstly,
to do a concert for some kids who’ve never been to a concert, and that seems
far out to us because we’ve been to so many concerts and performed so many, but
for a lot of kids, they’ve never got to experience that.  But the main this is to encourage kids to
chase their dreams and let them know that they have us who believe in them and
are there for them.  We tell them, if they
need some encouragement, send us a message on social media. We and our team
will be happy to help out wherever we can.
We want them to know they can do great things and not think, ‘just
because I come from this area or because I have this in my life I’m not going
to be able to accomplish something great.’
And they don’t have to become
professional musicians.  That’s
not what we’re pushing them to do. If they are, then that’s great, but if they’re
wanting to be the first one in their family to do a certain profession or go to
a certain college, we want to encourage them and be another voice that says,
‘you can do it.’

PH:
Seth, on your album, you and Jordan co-wrote almost all your songs,
right?

Seth:
Yes, we co-wrote all the songs with a third writer.  We’ve written with a couple of different
people like that.  We typically write
with my brother, me and another writer.
Recently we’ve been writing with four people.  Bill DiLuigi wrote five of the tracks with
us, and Dustin James wrote ‘Warning Label’ with us. It was a neat
experience.  All the songs were written
in our living room at our apartment here in Nashville.  That’s one of my favorite parts about the
whole industry, the creative process of writing songs.  You come in with a few guys and you all throw
out ideas and see what we’re feeling that day.
Usually within three or four hours you leave with a brand new song that
we’ve never heard before. It is so cool to come in with an idea and create
something out of nothing.

Find out more about the Dugger Band, their
music and where they are playing at their website, https://www.duggerband.com