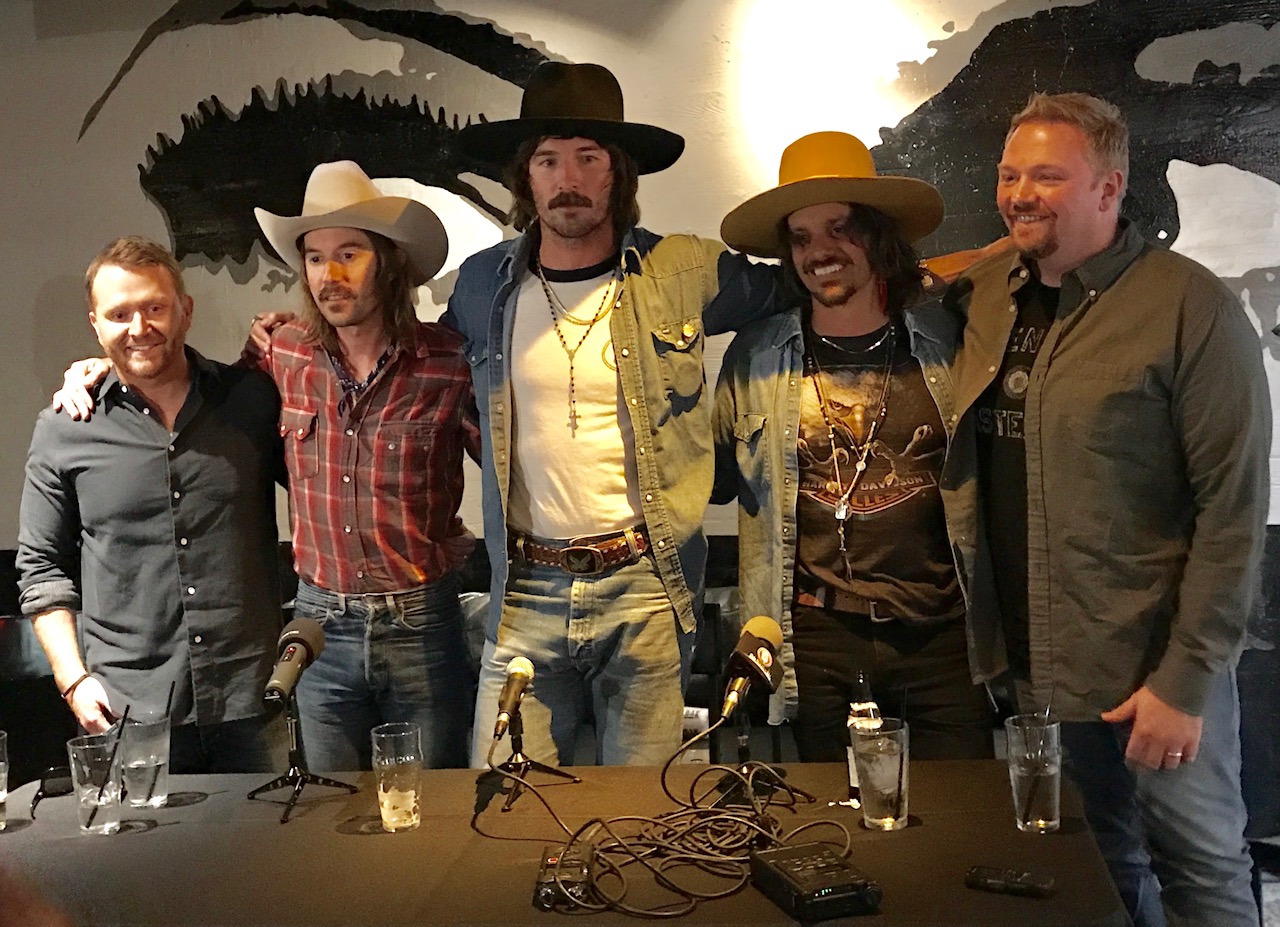 It was a five-man Number One party
Wednesday afternoon: the three members of Midland and their two co-writers,
jointly hosted by ASCAP and BMI.

They gathered with friends and music
industry execs at The Sutler in Nashville to celebrate the band’s debut single
which is also their first career Number One single. Titled “Drinkin’ Problem,”
the track was originally issued on an EP and is now the lead-off single from
their new album, ON THE ROCKS, released September 22.

“Drinkin’ Problem” was written by the three
members of Midland, Mark Wystrach (lead vocals), Jess Carson (lead guitar &
harmony vocals) and Cameron Duddy (bass & harmony vocals).  They share writing credits on the Number One
with superstar writers Shane McAnally and Josh Osborne. (Osborne has fourteen
Number Ones as a writer; McAnally has twenty-five Number Ones as a writer and
eight as a producer!)

“Drinkin’ Problem” was produced by Osborne,
McAnally and Dan Huff.

Notably, the song also scores another
‘First.’ It is the first debut single from a new act to top the Airplay charts
for Big Machine Records and their roster of artists.

During the celebration, Huff said to Mark,
Jeff and Cameron, “The fact that you have a very clear understanding of who you
are makes me so proud to be part of this team.”

In addition to “Drinkin’ Problem,” ON THE
ROCKS includes twelve more tracks, all written or co-written by members of
Midland. The trio all hail from the town of Dripping Springs, Texas.

Midland’s follow-up single, “Make A
Little,” is already impacting Country radio. On the CDXTRACtion chart for
October 11, 2017, the new single was the “Most Added” song of the week, meaning
it was added to the playlist of the most reporting radio stations.  You can find the video for “Make A Little” at
YouTube.

Midland are currently touring as part of the ‘CMT On Tour
Presents Jon Pardi’s Lucky Tonight Tour’ (Surely this year’s most
awkwardly-titled tour) and in early 2018 are scheduled to be part of The
Breakers Tour with Little Big Town and Kacey Musgraves. For a full tour
schedule, go to www.midlandofficial.com/#Music

Preshias Harrisis a music journalist and
music career development consultant with the emphasis on new and aspiring
artists and songwriters. Her book, ‘The College of Songology: The
Singer/Songwriter’s Need to Know Reference Handbook’ is available atwww.collegeofsongology.comFollow her
blog atwww.nashvillemusicline.com