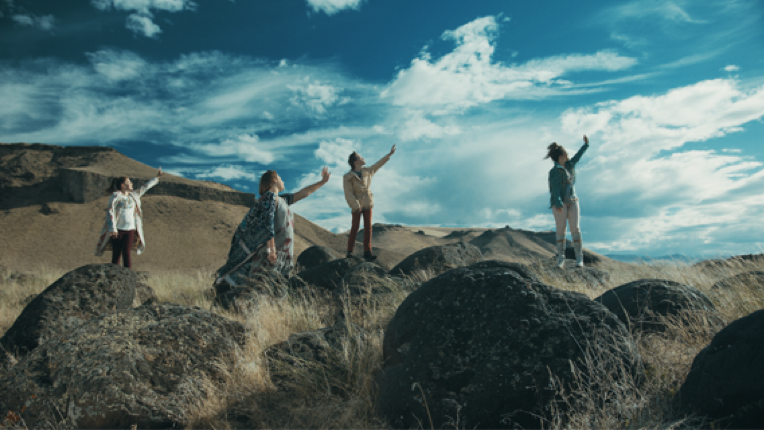 Just weeks after releasing The Runaway Hamsters official music video for GO!,the TRHibe continues to shine bright with the recent video placements on Music Choice and in 200+Rooms To Gostores across the U.S.

This cinematic video which premiered on Parade.com less than 3 weeks ago already has over 24k views on YouTube and is continuously climbing.

This
catchy, warmhearted anthem can now be seen in one of the largest
furniture stores in the U.S. as well as on Music Choice (digital cable
television channel or via mobile app). “It’s crazy and exciting that our
video is reaching a whole new market,” gushed TRHibe member Isabella
Keen. “So much time and effort was put into the making of GO!and
it’s incredible knowing how many people will get to enjoy it. We may
just need to spend more time shopping for furniture now.”

This
video was directed by Sun Valley Film Festival award-winning director
Christian Lybrook (famous for his short films including Carbon, The Seed and Split Railas well as producer of 6 Dynamic Laws for Success)
and features actors Travis Swartz and Jen Doner, who play TRHibe’s
parents in the video. Filmed in their beautiful hometown of Boise,
Idaho, the video encourages viewers to take the adventure and
follow-your-dreams. This tune is the title track off their brand-new EP Brothers and Sisters,which
showcases their signature stamp of authentic, sincere music fans love.
As the group is recognizing their own evolution and beginning to also
use the name TRHibe – their music is growing with them. Each song on the
EP was written by them and produced by Grammy-nominated Kent Wells
(Dolly Parton).

About The Runaway Hamsters: This
group consisting of Isabella and her triplet siblings — Abby, Gabby and
brother, Riley — has accomplished a lot relative to their age. Best
known for combining their musical talent and huge hearts, they create
music that is original, engaging and heartfelt. This effervescent group
started in early grade school and gained notoriety when they used both
their musical and songwriting abilities to raise money, which helped the
hospital caring for a second-grade friend with cancer. Since then, they
have continued to use their talent, big hearts and music to help
others.

The
Boise, Idaho natives have performed from Nashville to LA, opened for
Andy Grammer, took part in The National Finals Rodeo Cowboy Christmas in
Las Vegas for the past two years, appeared on numerous TV networks,
performed on WSM-AM (home of the Grand Ole Opry), been submitted twice
for a Grammy consideration in the children’s category, played the famous
Bluebird Café and participated in CMA Music Festival for the past few
years where they met fans, signed autographs and performed. With over
36k followers on Facebook and over a million views on their YouTube
channel, the hamster wheel continuously spins with the Hamstercast,
a free podcast to inspire, relate and positively influence fans of
their age with their own personal stories and views. It is available for
download on iTunes.