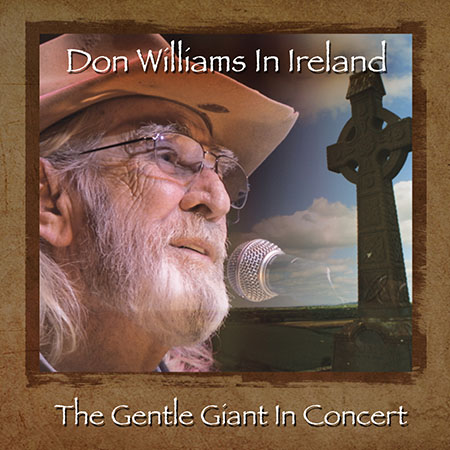 DON WILLIAMS IN IRELAND: THE GENTLE GIANT IN CONCERT – DELUXE LIMITED EDITION CD & DVD PACKAGE TO HIT STORES ON MAY 12

Nashville, Tenn. (May 9, 2017)
– Though his millions of fans around the world were heartbroken
recently to learn of his retirement from performing after five decades
of touring, there is a silver lining. Soon, you will be able to witness
the magic of Don Williams live in concert anytime you want – from your
own living room.

On May 12, Red River Entertainment/BFD/RED will release Don Williams In Ireland: The Gentle Giant In Concert – Deluxe Limited Edition CD & DVD
package featuring the singer in the midst of one of his more recent
ventures overseas. The special package will be available everywhere
music is sold in a special digi-pak for $19.98.

“It’s my sincere hope that the fans will enjoy this package,” said
the 2010 Country Music Hall of Fame member in a statement. “My whole
career has been about the fans, and hopefully these songs will bring
them as much pleasure as I gained from performing them.”

Don Williams In Ireland: The Gentle Giant In Concert
contains nineteen songs, including fifteen of his classic hits – and
three of his more recent songs. Included on the project are such
Williams mainstays as “I Believe In You,” “Lay Down Beside Me,” and
“Tulsa Time.” The set also includes “Elise,” from his 1998 disc I Turn
The Page, as well as “Imagine That,” which can be found in his 2012 disc
And So It Goes, which was a collaboration with fellow superstar Keith
Urban, who has long counted Williams as an influence.

Just a few weeks ago, Williams announced his retirement from the
entertainment industry after a five-decade career that included hits in
both Country and Pop music. Williams started his career as a member of
the Pozo Seco Singers in the 1960s, hitting with the folk hit “Time.” In
the 1970s, the singer moved to Tennessee, and became one of the biggest
stars in the business. His first hit, 1973’s “The Shelter Of Your
Eyes,” paved the way for a career that would see fifty-six chart records
– including seventeen number ones – as well as induction into both The
Grand Ole Opry and, in 2010, the Country Music Hall of Fame.

ABOUT DON WILLIAMS:
They came to call Don Williams “the Gentle Giant” in the decades he
was a dominating country hit maker because of his unique blend of
commanding presence and that laid-back, easy style that has appealed to
adult men and women alike—cutting across national and genre boundaries.
If those personal and musical qualities stood out strongly across the
1970s, ‘80s and ‘90s, they are all the more distinctive now. The
hundreds of memorable songs in that repertoire—over fifty of them major
hits—whether contemplative ballads, affecting love songs or change-up
rhythm numbers, have always been a core Don Williams strength and focus
Riding and crossing the line between country and pop, and all the more
distinctive for doing it, Don brought a sound and sensibility to the
country charts that proved a smash. He first gained musical attention as
a member of the pop folk trio The Pozo Seco Singers, which had six pop
chart hits in 1966-’67. Between 1974 and 1991, Don had at least one
major hit every year, including such country standards to be as “ Good
Ole Boys Like Me,” “Till the Rivers All Run Dry,” “It Must Be Love,”
“I’m Just a Country Boy,” “Amanda” and “I Believe in You.” He also had a
hit duet with Emmylou Harris on Townes Van Zandt’s “If I Needed You.”
Don was the CMA Male Vocalist of the Year in 1978; his “Tulsa Time” was
the ACM Record of the Year for 1979. In 2010, Don received country
music’s highest honor, with his induction into the Country Music Hall of
Fame. For more information, visit don-williams.com.