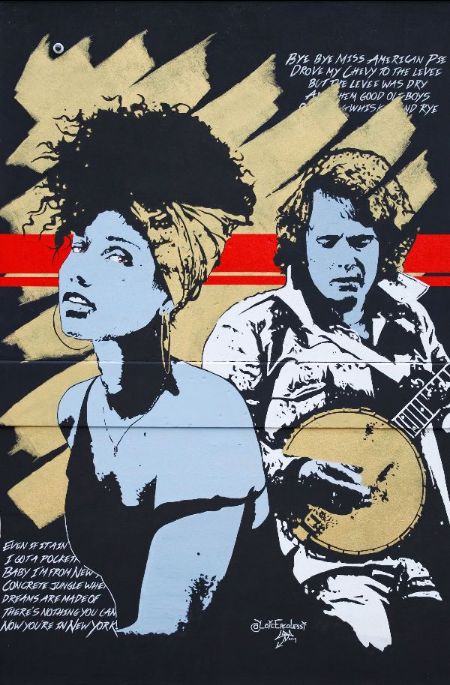 The
City of New Rochelle, along with the New Rochelle Council on the Arts
revealed spectacular – and huge – murals curated by Street Art for
Mankind (SAM) today in a ceremony taking place at Southside Plaza (134
North Avenue, New Rochelle).

The 60-foot tall artistic murals reflect the unique creativity,
diversity, and forward-thinking of the New Rochelle community. Two of
the murals already done and available for viewing are of New Rochelle
born hitmaker Don McLean and New York state Icon Alicia Keys, both are the only music artists honored with murals and were created by Miami-based street artist Loic Ercolessi.

“I am thrilled and honored that New Rochelle has selected me to
represent them for artistic creativity,” says Songwriter Hall of Fame
member Don McLean. “I love the community, in which, I was raised and
return every chance I get.”

During the month of October, prominent street artists from all around
the world came to downtown New Rochelle to create the first in a series
of eight murals. With their unique artistic talent and sensitivity, they
will color NRNY walls to pay a tribute to the history and values that
shape this community, creating a flavorful modern-day melting pot.

“The NRNY murals are big, bold, creative and fun. Diverse in style yet
complementary, all together they testify of the unique personality of
New Rochelle,” commented Audrey and Thibault Decker, cofounders of SAM.

In addition, other themes illustrated will be:

• Harmony between urban life and nature

• Sustainability efforts made by the city

• Forward Looking NRNY, full of dreams to meet the future.

Themes were put together by SAM in collaboration with the New Rochelle Council of the Arts.

Mayor Noam Bramson said, “New Rochelle is thrilled to work with Street
Art for Mankind to further enliven our downtown streetscape. These
murals bring beauty and creative energy to previously blank spaces, as
part of our comprehensive commitment to a culturally vibrant city
center.”

DEC 14 – The Clubhouse at Valencia Shores / Lake Worth, Fla.

A New York native, Don McLean is one of the most revered and respected
songwriters in American history. After paying his dues in the New York
club scene in the late ‘60s, he went on to score mega-hits like
“American Pie,” “Vincent (Starry, Starry Night),” “Castles in the Air”
and many more. In 2004, McLean was inducted into the Songwriters Hall of
Fame by country superstar Garth Brooks. In 2000, “American Pie” was
named one of the Top 5 Songs of the 20th Century by the RIAA and in 2002
was inducted into the GRAMMY Hall of Fame. In 2015, one of McLean’s
four handwritten manuscripts of the lyrics to “American Pie” was
auctioned by Christies, selling for just over $1.2 Million. 2017 brought
a huge honor when his iconic song was inducted into the Library of
Congress’ National Recording Registry, joining less than 500 works
including “Somewhere Over the Rainbow.” With over 40 gold and platinum
records worldwide, McLean’s prowess for writing timeless songs was again
captured on his 2018 album, Botanical Gardens, as he artfully
weaves country, Americana, folk, and boot stomping rock for an eclectic,
yet American sound that he is known for.