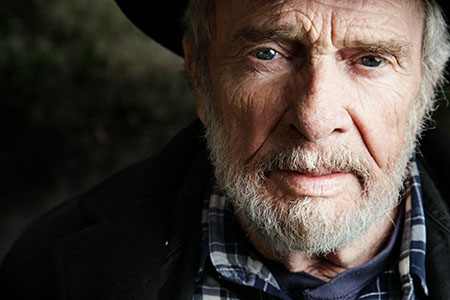 REACTIONS TO MERLE HAGGARD’S PASSING
FROM THE COUNTRY MUSIC COMMUNITY AND BEYOND
We’ve
lost one of the greatest writers and singers of all time. His heart was
as tender as his love ballads. I loved him like a brother. Rest easy,
Merle. — Dolly Parton

We’ve lost another hero. Now he doesn’t have to be in pain anymore. I
know he’s not suffering anymore. I just can’t imagine a world without
Merle. It’s so hard to accept, but I’ll continue honoring him on stage
just as I do during every show. We played a lot of gigs together through
the years, but some of my fondest memories were hanging out in a
natural setting, like the time we sat there by the river in his backyard
and ate bologna sandwiches. Merle was a simple man with incredible
talent like no other. And now he’s up there singing with George [Jones]
and all the angels. Love you, Merle. — Tanya Tucker

Merle Haggard was an original. Not just a singer, not just a songwriter,
not just another famous performer. He was your common everyday working
man. I remember when I was 15 years old on tour with Waylon Jennings and
Merle Haggard. They both were wondering which one of the two was going
to make it. Well, they both made it. Today, ole Merle joined Waylon,
George, and daddy to sing in the Heavenly choir. — Hank Williams, Jr.

My heart is broken over the loss of one of the greatest country singers
ever. He was an icon to me. He took me to school with his phrasing, his
songwriting and style – and he was undoubtedly one of my greatest
influences. Getting to sing with him several times over the years will
be memories I cherish forever. He was such a great man, on stage and
off. — Gene Watson

Merle Haggard was one of the greatest songwriters, performers and
story-tellers that ever lived. I grew up on his music and am I’m so
saddened by his passing. — Kiefer Sutherland

I am deeply saddened to hear of Merle’s passing. He was a dear friend, I
remember touring with him at various points throughout the 90’s and
those are memories that I will always cherish. I hate that he lived so
far away from us these last few years, but definitely understand it. My
hope is that he passed a happy and content man. I learned so much from
this kind man about singing, when Merle Haggard sang you paid attention.
He is about as close to perfection in country music as we will probably
ever have. — Lorrie Morgan

I am devastated over the loss of Merle Haggard. He was my absolute
favorite of ALL time. I have listened to him since I was a kid. His
poetry, his voice and his pure country music style will live forever. I
am listening to him sing Sweet Jesus with The Oak Ridge Boys as I write
this. SO honored to have recorded this Dove Award winning song with my
HERO! Rest Easy Hag… Until The Day…“Jesus… Sweet Jesus…You love me just
as I am… Jesus… Sweet Jesus… I’ve been washed in the Blood of the Lamb!”
— Joe Bonsall / Oak Ridge Boys

A few years ago Merle sent me a song he wanted The Oak Ridge Boys to
record. He’d written it with Kenny Vernon. When I heard it, I felt there
was no way we could do it unless we asked Merle to do it with us.
His response was, “Anything you ‘Boys’ want.”
So, we recorded “Sweet Jesus,” and it won a Gospel Music Association
Dove Award for Best Country Song. It was a huge honor to sing with one
of our biggest heroes, Merle Haggard.
May he rest in peace in the arms of Sweet Jesus. — Duane Allen / Oak Ridge Boys

Merle
was a singer’s singer, a musician’s musician, and a songwriter’s
songwriter. He set the feelings of the everyday common man to music,
creating songs that will outlive us all. I feel privileged to have
toured with him and known him as both a great artist and as a friend.
His passing leaves a big hole in country music and in the hearts of the
millions who loved him and his artistry. — Bill Anderson

Merle always treated me like a true friend treats his true friends. We
had great fun every time we worked together. He was one of the good
ones. Getting to see God’s face on your birthday, what a wonderful gift!
— T. Graham Brown

George and I loved Merle so much. George would always say nobody could
ever sing like Merle Haggard. Merle was one of our Country Heroes. Now,
George and Merle are together again singing with the Angel Band. — Nancy Jones

We join the world of the broken hearted hearing of the death of Merle
Haggard. One of the first things John and I realized we had in common
was our love of Haggard songs. What a blessing to have had a chance to
get to know him and work with such a legend in our career. Merle, guess
you finally are on the ultimate Natural High. We will have your music in
our hearts and souls and honkytonk nights forever! God Bless the great
Merle Haggard. May you fly with the Angels. — ‘Big Kenny’ Alphin / Big & Rich

“Mighty” Merle Haggard was the greatest country songwriter of ALL TIME.
We shared many great memories, and I will miss him. Merle set the bar so
high no one will ever top it. He refused to bend and turn to the whims
of the music industry throughout the decades, and instead remained a
steady ship of constant greatness that every artist could look up to and
aspire to be. I had the distinct honor of becoming his friend and spent
priceless time picking guitars on the back of his bus, doing videos
together, and I soaked up every drop of soul from him every chance I
got. You take your hat off when you shake hands with Merle Haggard. You
listen and pay attention and realize that you are in the company of one
of God’s prize creations. I will miss him. I bet Heaven has swingin’
doors today. — John Rich / Big & Rich

We’ve lost another great one. Merle leaves a great legacy behind, the
songs, the styling, the phrasing….to study Merle’s musical style was to
immerse yourself in the heart of Country. For months we’ve been planning
a Tribute to Merle, the guest have been invited and Merle had it on his
calendar. We will miss him greatly. Now the tribute will be a honoring
of the man his songs, his music and his life. — Larry Black, Larry’s Country Diner

He was the genius of the last half century in country music and we will all miss him and nobody can replace him. — Leroy Van Dyke

He’s my hero and I’ll never forget recording ‘Don’t Sing Me No Songs
About Texas’ with Merle. To hear hear him on the same track as me was
amazing. Merle was the master. The ultimate writer, musician and singer.
He did it all. And I will miss him so much. — Moe Bandy

Merle Haggard’s death not only signifies the passing of the greatest
singer Country Music has ever known, but also resonates hard with us
personally. At our house we considered Merle almost a family member,
from the early days when our dad would wake us up for school by playing
one of his albums to years later when we played many shows together with
Merle on tour. The first show we played with Merle – he came barreling
on to our tour bus looking for a place to hide while the police were
searching his bus. By the time that incident got cleared up we’d become
friends. We let him know he could hide out on our bus anytime he needed
to and we continued to tour many more times with him and collect lots
more Merle stories over the years. Our thoughts and prayers are with his
family today and may God rest his soul. — David and Howard Bellamy, The Bellamy Brothers

He did our Statler Brothers TV show a few times and I got to know him
over the years. He was one of the most influential people in this
business. He is going to be sorely missed. Heaven’s band just got
another great member much like so many of our other heroes who have
passed. We will miss him dearly. — Jimmy Fortune

It’s a very sad day for the world to lose the great Merle Haggard. I
still can’t believe it. The last time I saw him was just outside of the
Station Inn here in Nashville. We stood in the middle of the road and
laughed and talked. I can still see the sparkle in his eye. He had such a
beautiful spirit. I treasure that memory. Even beyond his amazing songs
and music, it was easy to see why Merle was so loved. He will missed
forever. — Deborah Allen

I have lost a dear friend, but Country music and its fans have lost one
of its greatest treasures. One of my greatest memories of Hag was always
speaking on Christmas and catching up, as well as having toured and
sang with him. — T.G. Sheppard

I am still sitting here processing the news I just learned of the
passing of Merle Haggard and ironically on his birthday. Remembering
precious memories of meeting him just one year ago, sitting on his bus,
talking about how he continued to write songs each and every day. He
even mentioned he had a song for me. How special it was, as he listened
to us sing, and after he even played Hunter’s fiddle. His music will
live forever! Our sincere condolences to his family. Rest In Sweet Peace
“Mighty Merle”!! — Rhonda Vincent

Being that I was a huge Merle Haggard fan, he was one of the ones that I
did a couple of shows with early in my career. He welcomed me into the
music industry. It’s extremely sad when you see people like “The Hag”
leave us – he’s been huge, the industry is what it is today because of
great musicians/artists/songwriters like him. — Mark Wills

My friendship goes back to 1963 when Merle was voted Most Promising Male
Vocalist and I was voted Most Promising Female Vocalist by VIP, which
later became the ACM Awards. When I first met Merle, I was a little
intimidated because my mom warned me of anybody who had been in prison. I
got over my fears and we became very close through the years. He
recorded two of my songs “Life of a Rodeo Cowboy” and “My Love For You.”
And I sang backup for him on “Ramblin Fever” and “Always On A Mountain
When I Fall.” His passing is such a loss to not only me personally, but
our entire industry. We all loved the Hag. — Jeannie Seely