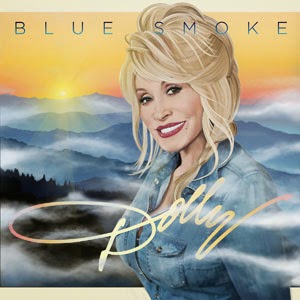 Nashville, Tenn. (May 21, 2014) – The most celebrated female in country music history, Dolly Parton, adds another career milestone to her long list of accomplishments!!!  With the release of her 42nd studio album, BLUE SMOKE,
Parton scores her highest charting solo album ever.  Parton, amazingly,
has only visited the top 10 of the Billboard 200 once: with the
collaborative set “Trio,” with Emmylou Harris and Linda Ronstadt. It
peaked at No. 6 on May 2, 1987, after earlier debuting at No. 38 on
March 28, 1987.

“I am glad that people are enjoying the music from my new Blue Smoke
album.  It feels great to be in the Top 10,” says Dolly Parton.  “It’s
always an honor to know the fans spend their hard earned money on my
music.  Thanks everybody!”

Parton’s chart history on the Top Country Albums chart is more
befitting of her living-legend status: She’s notched 42 top 10 albums,
with six of them going to No. 1. On the Hot Country Songs chart, she
holds the record for the most No. 1s among women, with 25.

About Dolly Parton:
Dolly is the most honored female country performer of all time.
Achieving 25 RIAA certified gold, platinum and multi-platinum awards,
she has had 25 songs reach number 1 on the Billboard Country charts, a
record for a female artist. She has 42 career top 10 country albums, a
record for any artist, and she has 110 career charted singles over the
past 40 years. All-inclusive sales of singles, albums, hits collections,
paid digital downloads and compilation usage during her Hall of Fame
career have reportedly topped a staggering 100 million records
world-wide. She has garnered 7 Grammy Awards, 10 Country Music
Association Awards, 5 Academy of Country Music Awards, 3 American Music
Awards and is one of only five female artists to win the Country Music
Association’s Entertainer of the Year Award. Dolly was inducted as a
member of the Country Music Hall of Fame in 1999.  And the litany goes
on.