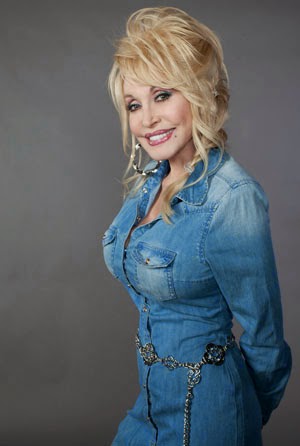 LONDON,
UK – Dolly, who played Glastonbury one week ago today, is definitely on
fire!  The crowd, on hand, at Glastonbury specifically watching Dolly’s
performance reached in excess of 150,000 people while the BBC has
reported the largest viewing audience ever of Glastonbury tuned in to
see Dolly take the stage during their live broadcast.

Then when Glastonbury was all over and everyone headed home, workers
began cleaning the acres and acres of land when out of a tent pops a
fluffy white dog that was left behind.  Workers immediately named it
“Dolly” as it characterized Dolly’s beauty, love, peace, and sweetness
just as she had shown fans a few days before while performing on the
Pyramid stage.  As media became aware and the search for the dogs’ home
began, the dog was quickly nicknamed “Doggy Parton”.

Now on a dog-gone good note, Dolly Parton plans to adopt the dog provided the original owners are not found.

“I
had my manager Danny Nozell call the Happy Landings Animal Shelter to
make sure the dog is being treated and cared for properly,” says Dolly
Parton.  “At this time, nobody has claimed the dog and the dog is in
great hands at the shelter.  I will take the dog home to America if
nobody claims her within a reasonable amount of time.”

In addition, the iconic Dolly Parton shows no signs of slowing down as her latest UK album release ‘Blue Smoke – The Best Of’,
brings Dolly to her all-time highest chart position landing at #4 in
its fourth week of release.  Dolly originally entered the chart at #6,
which at the time, was her highest ever album chart position.

Blue Smoke – The Best Of, includes her latest studio album Blue Smoke
featuring “Home”, “Blue Smoke” and new duet with long- time
collaborator and friend Kenny Rogers and even a Bon Jovi cover!
Alongside her greatest hits on disc 2 featuring the classics such as
“Jolene”, “9 to 5”, “Islands in the Stream”, “Little Sparrow”, “Here You
Come Again” and “I Will Always Love You” plus many more.

Dolly is the most honored female country performer of all time.
Achieving 25 RIAA certified gold, platinum and multi-platinum awards,
she has had 25 songs reach number 1 on the Billboard Country charts, a
record for a female artist.  She has 42 career top 10 country albums, a
record for any artist, and she has 110 career charted singles over the
past 40 years.  All-inclusive sales of singles, albums, hits
collections, paid digital downloads and compilation usage during her
Hall of Fame career have topped a staggering 100 million records
worldwide. She has garnered 7 Grammy Awards, 10 Country Music
Association Awards, 5 Academy of Country Music Awards, 3 American Music
Awards and is one of only five female artists to win the Country Music
Association’s Entertainer of the Year Award.

Dolly’s career has spanned nearly five decades and is showing no
signs of slowing down.  An internationally-renowned superstar, the
iconic and irrepressible Parton has contributed countless treasures to
the worlds of music, film and television.  Some of her hit films have
included Nine to Five, Steel Magnolias, The Best Little Whorehouse in Texas andRhinestone.  Parton received two Oscar® nominations – one for writing the title tune to Nine to Five and the other for “Travelin’ Thru” from the film Transamerica.