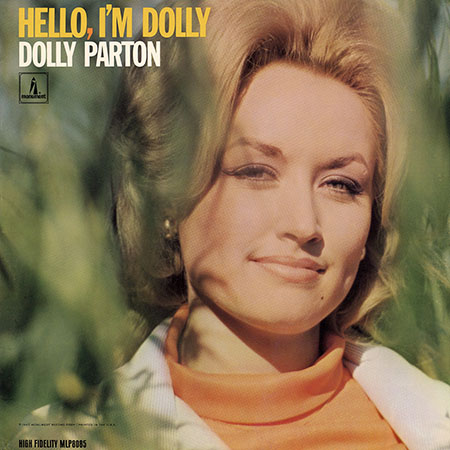 
NASHVILLE, Tenn. (February 13, 2017) – 50 years ago today, Dolly Parton released her first full-length album, Hello, I’m Dolly.
The album, which debuted on Monument Records, contained Parton’s hits
“Dumb Blonde” (written by Curly Putman) and “Something Fishy” (written
by Parton). Both singles reached the top twenty on the country singles
charts, and the album itself reached #11 on the country albums chart.

Produced by Fred Foster, Hello, I’m Dolly
caught the attention of Porter Wagoner, who ultimately invited Parton
to become a member of his band and appear on his popular weekly
television show. These appearances led to Parton’s rise to superstardom
and she became a bonafide household name.

“I can’t believe it’s been 50 years since I did my first album,”
Parton recalls. “What a wonderful 50 years it has been. Thanks to my
Uncle Bill Owens and Fred Foster for believing in me early on. And
thanks to all the fans out there…I hope to have at least another 50
years!”

The album contained Parton’s versions of three songs she wrote that
had already been hits for other artists: “Put it Off Until Tomorrow”
(Bill Phillips), “Fuel to the Flame” (Skeeter Davis), and “I’m In No
Condition” which charted by Hank Williams Jr.

To learn more about this American icon, visit www.DollyParton.com.

About Dolly Parton:
An internationally renowned superstar, the iconic and irrepressible
Dolly Parton has contributed countless treasures to the world of
entertainment. All-inclusive sales of singles, albums, hits collections,
paid digital downloads and compilation usage during her illustrious
career have topped a staggering 100 million records worldwide. Achieving
25 RIAA certified gold, platinum and multi-platinum awards, Dolly has
had 25 songs reach No. 1 on the Billboard Country charts, a record for a
female artist. Dolly has garnered 7 Grammy Awards, 10 Country Music
Association Awards, 5 Academy of Country Music Awards, 3 American Music
Awards and is one of only five female artists to win the Country Music
Association’s Entertainer of the Year Award. Making her film debut in
the 1980 hit comedy “9 to 5,” Dolly earned rave reviews for her
performance and an Oscar nomination for writing the title tune, along
with her second and third Grammy Awards. Roles in “Steel Magnolias,”
“Best Little Whorehouse in Texas,” “Rhinestone,” and “Straight Talk”
followed. Dolly saw a cherished dream become a reality in 1986 with the
opening of her own theme park, Dollywood, in Pigeon Forge, Tennessee. In
1988, Dolly began the Dollywood Foundation which funds Dolly Parton’s
Imagination Library across America and in Canada by giving every
preschool child a book each month from the time he or she is born until
the child reaches kindergarten. Currently 80,000,000 books are mailed to
children in the US, Canada and throughout the UK. In 1999, Dolly was
inducted as a member of the Country Music Hall of Fame. She has her own
star on the Hollywood Walk of Fame and in 2004, the U.S. Library of
Congress presented her with their Living Legend Award for her
contribution to the cultural heritage of the United States. In December
2015, more than 13 million tuned into “Dolly Parton’s Coat of Many
Colors” and was the most-watched film on broadcast networks since May
2012. The sequel, “Dolly Parton’s Coat of Many Christmas Colors: Circle
of Love,” was equally as successful garnering 14 million viewers. In
December 2016, Dolly’s humanitarian efforts shined once again, as she
created the Smoky Mountains Rise telethon which helped raise close to
$10 million to benefit the victims of the East Tennessee wildfires.