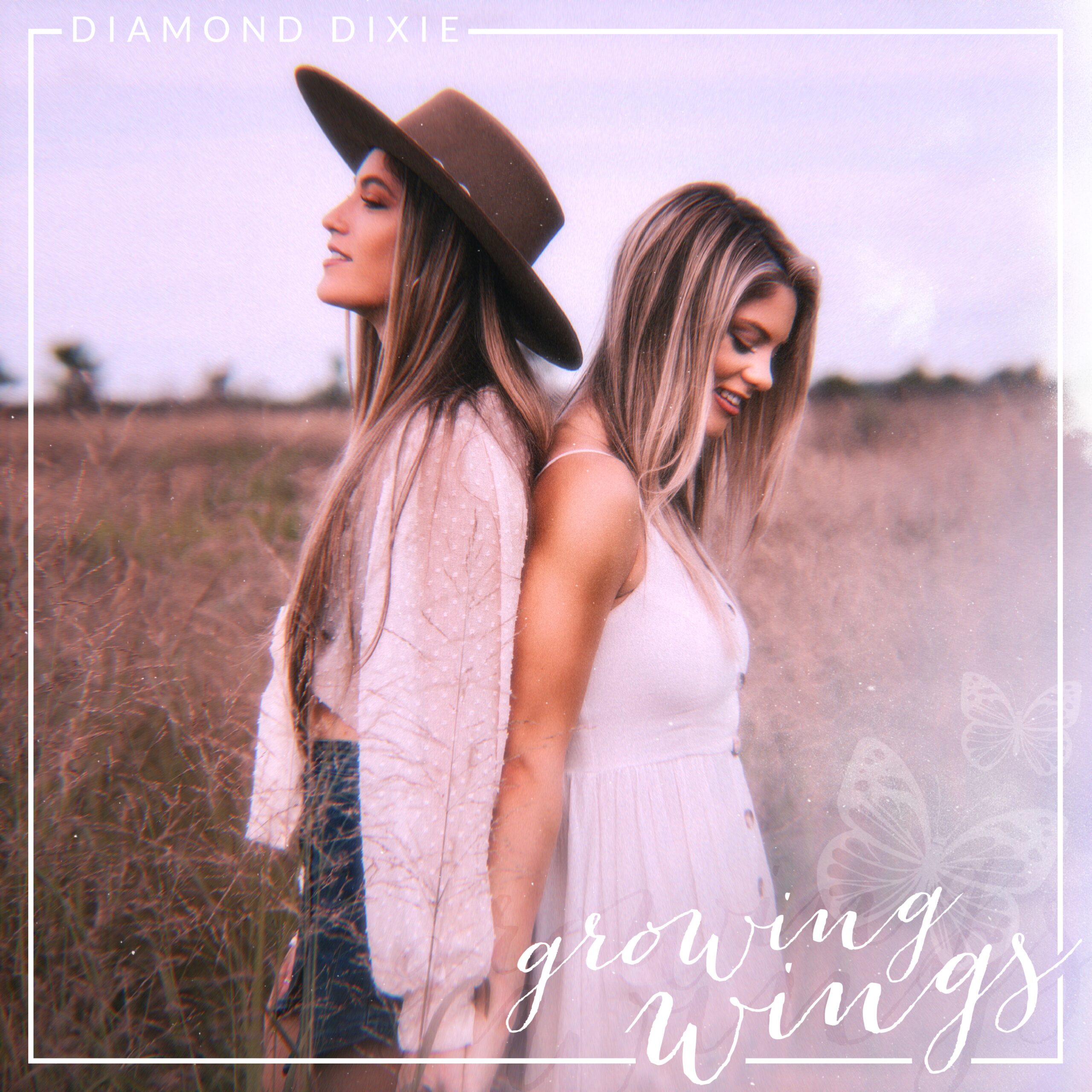 Diamond Dixie – For The Love of Our Fans!

For The Love of Our Fans: The motivation that drives Growing Wings, the new album from Diamond Dixie.

I recently had a very special interview with these two sisters, Gabriela and Bianca LeDuc, otherwise known as Diamond Dixie. We have watched them grow from local performing in their hometown of Orlando, Florida, to the country music’s global stage.

To give you a little background on the girls, you must know who planted the seed for the sister’s love of music. The girls were destined to be in music. Both their grandmother and grandfather played several instruments, and their father played in a band while in high school. In addition, they looked to their parents for their early music inspiration.  Music was a huge part of their early childhood.  Dad was partial to Rock music, while their Mother loved Spanish music. The inspirations from their parents laid the foundation for Gabriela and Bianca, who started their music journey in elementary school when their Father started guitar lessons with them. Some of country’ powerhouse females (Miranda, Shania and Taylor) became role models and fueled their dreams.

They both knew at an early age – Bianca at age 11 and Gabriela at age 13 – that they wanted to be on the stage. By the time they were both in their teens, they had built a regional following that has now spread globally. They have performed on some of the biggest stages in the US, from the House of Blues to the CMA Music Festival stages. Due to the overwhelming response form their adoring fans, they released their debut EP, titled Diamond Dixie, in 2015. Still in their teens, they continued to play local shows and churches; in fact, anywhere they could perform.  As they progressed into becoming full-time live music artists, they also became multi-instrumentalists. Gabriela started playing mandolin and Bianca picked up the banjo. Once again, the sisters’ love of songwriting and the fans asking for new music, led the girls back to Nashville to record their second EP, Reckless, while they continued to tour the southeast.

The sisters say that their fans are the main motivation and inspiration for all the hard work and endless hours they put into honing their craft and building their musical careers.

One of the fan favorites is a song called “Limitless.” The lyrics describe their musical journey and all the ups and downs and in their hard work coming full circle.

As we began the interview, one thing that you will instantly notice is their thankfulness to their fans. They are sincere in their awareness of how difficult 2020 has been, which is why they decided to release their full-length debut album.

“If there is one thing that 2020 taught us, it’s that everything can change in the blink of an eye,” explained Bianca. “We don’t take one single moment of our career for granted–not the past, nor the present, and certainly not the future–which is why we embrace and celebrate it all on this album. We hope fans will enjoy this approach as much as we did.”

Gabriela added, “We wanted to bring together our fan favorites and add some new originals. It is like celebrating our ten years together with our music family and our fans.”

“Music is our therapy,” affirmed Gabriela “and we’re pretty sure it is the same for many fans. So, we decided to hustle things up a little and put something positive out there in the universe right now, when people need it most.”

The sister-duo decided to release Growing Wings (and the single, “Lock It Up”) five days early due to their fans’ overwhelming response and excitement following the album’s announcement last month. However, 2020 was such a low period for so many people, they decided to reschedule it as early as possible to start the new year off on a high note.

When the pandemic caused their performance schedule to be canceled last year, Bianca and Gabriela hit the studio’s isolation booth to track their latest album.

“Yeah…that and the fact we were so excited that we just couldn’t wait,” joked Bianca. “Seriously, though…I’m honestly not sure who really needed this release to happen now the most–us, or the fans? This music has helped us find our joy again and we hope it will lift the spirits of our fans too.”

Growing Wings includes the new single, “Lock It Up,” also available today through online music retailers, streaming platforms, and at https://www.diamonddixie.com/.  Co-written with hit writer, Rick Huckaby (“Muddy Water–Trace Adkins, “Beer with Jesus”–Thomas Rhett, “Steps”–Tracy Lawrence) and released just in time to gather traction before Valentine’s Day, this flirtatious single with a powerful groove addresses that awkward stage in romance when the relationship is not yet “official” but both parties want to take things to the next level.

I put the girls on the spot and asked each of them to name their favorite song. I know it’s like asking a mom to name her favorite child. Both sisters said, “Lock it Up.” The reason? Because they wrote with Rick Huckaby and it’s the one for which they gave the producer creative freedom and it turned out way different than their other material and more in the direction they are headed.

The album concludes with the title track, “Growing Wings” which addresses the girls’ future. It is the most poignant and autobiographical song the sisters have ever written. “This song reflects where Bianca and I are in our lives,” stated Gabriela. “By May, both of us will be out of college, and will soon be leaving home to pursue careers and begin our own lives. It’s a bittersweet moment in life when you have to be brave if you want to move forward. You must leave the comfortable nest for an uncertain future, but you also know if you don’t take that leap forward, you will ever know if you can truly fly.”

Track 01- We decided to pick “Through With You” as the first song on the album because it grabs the listener right away and continues to draw the listener in with its “head-bangin’” melody and empowering lyrics.

Track 02- “I Think It’s Funny” is a very “tongue-and-cheek” song about karma. What goes around usually comes right back around and it’s kinda funny (a sarcastic type of funny) when it happens to the person that initially hurt you from the start.

Track 03- “Without Your Love” is an empowering song written about how a relationship does not determine who you are. Chasing your dreams is much more important than a relationship that doesn’t support it.

Track 04- “Limitless” is the first single off of the album. This song tells the story of our journey through music; how we got here and how it’s so important to pursue your passion, whatever it may be in life, despite those who believe you can’t achieve your goals.

Track 05- Growing up, our parents were in the airline industry and would sometimes miss holidays, graduations and even some concerts of ours. One parent would be in town and the other one wouldn’t, so this song is inspired by no matter how many miles apart, their love will always overpower any distance that may be in their way, just like many people experiencing long distance relationships.

Track 06- We wrote this female bop with our really good friend Hallie Wooldridge in Nashville and it’s pretty much about boys that can’t take the hint that we’re not into them. We couldn’t stop singing this song after we wrote it and it’s cool seeing our fans sing this one back to us at shows.

Track 07- “Lock It Up” is a groovy bop about that awkward stage in the beginning of a relationship where it’s not official but both the guy and girl have made it clear that they only want to see each other. Like are we boyfriend/ girlfriend or not??? Like, boy LOCK UP MY HEART!!!!

Track 08- There are times when you meet a guy or girl, and you just KNOW that they are going to break your heart. They’ve got the look, the attitude and yet you’ll still choose to go all in. That’s what this one is all about.

Track 10- The last track on the album is the title of the album, “Growing Wings”. This past year was a truly difficult time for our music and it took its toll on us, but we also came to realize that music is our passion and will forever be with us. There are many times in life where we might feel stuck or at a dead-end but if we don’t grow our wings or leap from the nest, we will never know if we can truly fly. This is that time for us.

The album’s producers are Ben Jackson, Greg Bates (“Limitless,” “Take a Hint,” and “Heartbreak,”) and Grady Saxman who produced the six new recordings, including the singles, “I Think It’s Funny,” and “Girls Like That” released last year. Both the girls agree, “Our team has made this album so special to bring together. We are so thankful.”

NOTE: Throughout the years, the girls have actively cultivated a massive social media fanbase of well over a million followers on Facebook alone and are represented by PMG Sports for brand endorsements. Check them out on: https://www.youtube.com/user/WatchDiamondDixe   For more information on Diamond Dixie, please visit https://www.diamonddixie.com/