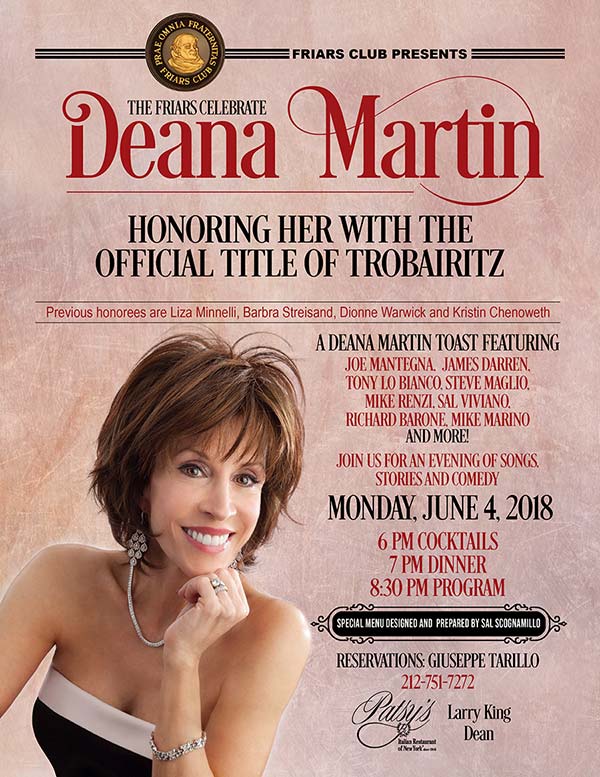 New York, N.Y. – Deana Martin, daughter of entertainment legend Dean Martin, is set to be honored with the official title of Trobairitz by the Friar’s Club in New York City. The prestigious title will be formally presented to Martin on June 4 as part of “A Deana Martin Toast.”

This coveted title has previously been awarded to several other esteemed female entertainers, including Liza Minnelli, Barbra Streisand, Dionne Warwick and Kristin Chenoweth.

“I’m honored and delighted to receive the title of Trobairitz from
the world-famous Friars Club,” Martin explained. “I’m in great company …
Barbra Streisand, Liza Minnelli, Dionne Warwick and Kristen Chenoweth.
Apparently, they only give this award to women under 5’6″.”

The
event will include a cocktail reception at 6:00 pm, followed by a 7:00
pm dinner prepared by Chef Sal Scognamillo of Patsy’s Restaurant in New
York City, and the awards program beginning at 8:30 pm.

Deana
Martin has become an instantly recognizable voice and figure in the
pantheon of The Great American Songbook in her own right. Her 2006 debut
CD release, ‘Memories Are Made of This,’ stayed in the top ten for 40 consecutive weeks. Her follow-up CD, 2009’s, ‘Volare,’ debuted in the top ten of the Billboard charts, followed by 2011’s seasonal evergreen, ‘White Christmas,’ 2013’s critically acclaimed ‘Destination Moon’ and her latest, 2016’s ‘Swing Street,’ garnered airplay on top jazz, standards and country radio stations, emphasizing her prominent status as a hit recording artist.

As a celebrated author, Deana found herself on the New York Times’ coveted Best Seller list with her 2004 memoir, ‘Memories Are Made of This: Dean Martin Through His Daughter’s Eyes.’
In it, she shares never-before-told stories about her father and his
‘Pallies’. The e-book version returned Ms. Martin to the best-selling
book charts in 2015 on Wall Street Journal’s roster of best-selling
e-books.