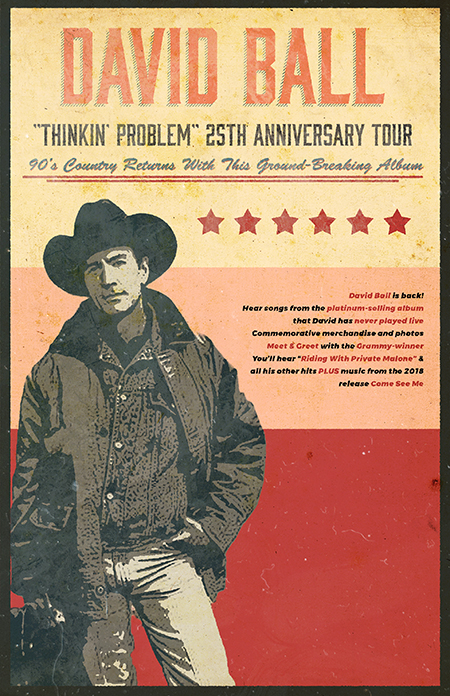 Thinkin’ Problem, the platinum selling debut album by legendary artist & songwriter David Ball has been re-issued and released by Omnivore Recordings. The deluxe 25th Anniversary Edition
contains a previously unreleased alternate title cut, seven additional
songs from that period, and never before seen images from the original
photo session, kept in the Warner Brothers vault for twenty-five years. A
first time available issue of the album will be distributed for
streaming and download on all digital platforms, with a physical CD
available at independent record stores and online here.

Thinkin’ Problem’s impact in Country music in 1994, garnered
Ball a nomination for a Grammy Award in Best Country Male Vocal
Performance as well as a nomination for CMA Horizon Award and Song of
the Year.

“David
has one of the most Classic and sincere voices in country music- the
first time I heard him, I thought, ‘I believe what that guy is saying’
and after touring with him I knew for sure, he was the real deal – can’t
wait to ‘drop a needle’ on this one!” Kix Brooks, states in the liner
notes of Thinkin’ Problem reissue.

“…he glides between swing, honky-tonk, blues, and even a touch of
Tex-Mex with the ease of George Strait, the difference being Ball
composes his own material.” writes The Austin Chronicle

Omnivore Recordings is an independent record label founded in 2010,
specializing in CD and vinyl reissues of previously out-of-print albums
by notable artists.

David Ball grew up in Spartanburg, SC where he learned
to play guitar but later honed his skills on the upright bass, which led
to a gig playing bass in Uncle Walt’s Band, credited as the first
Americana act. The legendary trio was headed by Walter Hyatt and also
included Champ Hood. A solo career led Ball to Nashville where he signed
a publishing deal and later, a recording contract.  David’s music came
full circle when Lyle Lovett reached back into Uncle Walt’s Band
repertoire to include one of David’s early songs, “Don’t You Think I
Feel It Too” on his 2009 disc, Natural Forces. David won a Grammy Award
for the song “Old Folks At Home (Swanee River)” from the album Beautiful
Dreamer – The Songs of Stephen Foster. (2005) Fourteen of his singles
have entered the Billboard charts, including “Thinkin’ Problem” and
“Riding With Private Malone,” which made Ball one of the first artists
to take an indie single to the Country Top 5. He has recorded a total of
seven studio albums, including his platinum certified Thinkin’
Problem.  The title track was the top selling country song of 1994. In
2013 David Ball became one of the first living members to be inducted
into the Historic Spartanburg Music Trail in his hometown of Spartanburg
SC, joining other notables such as Hank Garland, Don Reno, Buck Trent
and the Marshall Tucker Band. He won the 2016 Operation Troop Aid Chris
Kyle Patriot Award, for his extensive work with our active duty
servicemen and women. In 2018, Ball released his 10th studio album, Come
See Me.