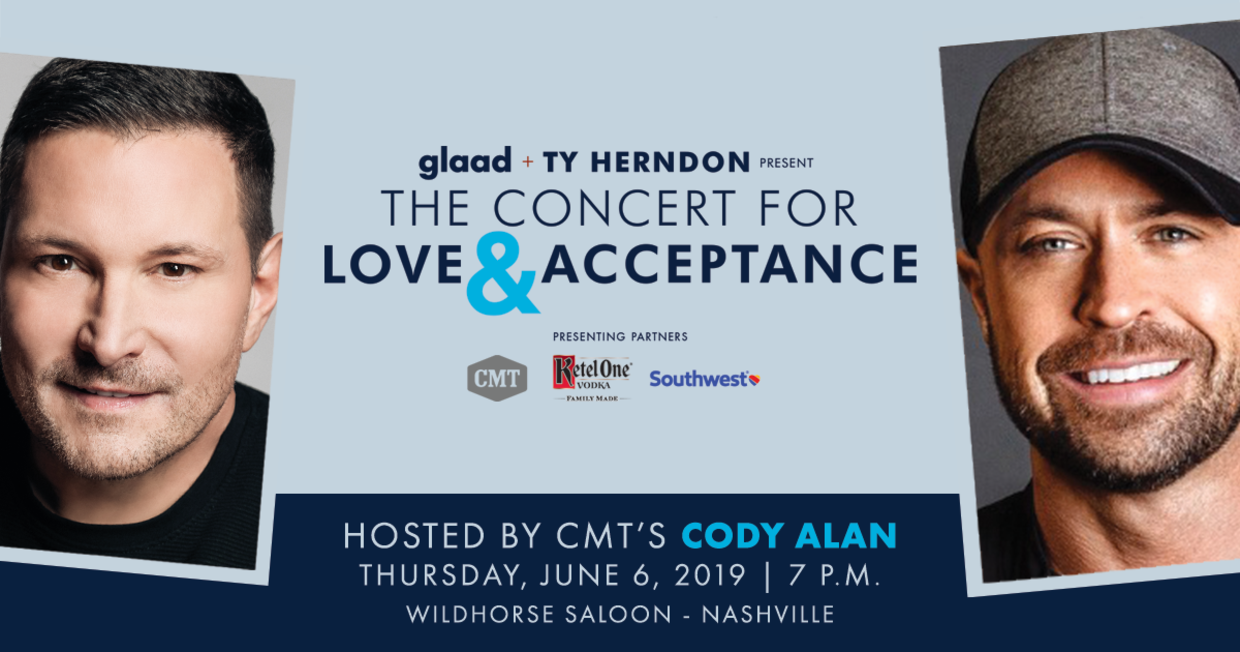 GLAAD, the world’s largest lesbian, gay, bisexual, transgender, and queer (LGBTQ) media advocacy organization, announced Daughtry, Chely Wright, and Harper Grae as the first set of performers for the 2019 Concert for Love & Acceptance in Nashville, Tennessee on June 6th.
Daughtry will perform a special acoustic set at the Concert for Love
& Acceptance, which features a coalition of artists and celebrities
appearing and performing to accelerate acceptance for LGBTQ people. The
5th annual concert will take place during the legendary CMA Fest and
will be hosted by Grammy-nominated and Dove Award-winning artist Ty Herndon and CMT host Cody Alan. Herndon will also perform.

“Music has the power to not only connect us, but to change hearts and
minds, and LGBTQ people and our allies are front and center in all forms
of music,” says Zeke Stokes, GLAAD’s Chief Programs Officer. “It
has been incredible to see country music continue to evolve as a space
for inclusivity and acceptance for both artists and fans. The Concert
for Love & Acceptance continues to promote this message, and we look
forward to welcoming another incredible lineup of artists this year who
will join together in support of the LGBTQ community.”

Chely Wright, who blazed trails when she came out as lesbianin 2010, makes her first appearance at the concert.

“I
am so excited to have my friend Chely Wright performing with us for the
first time at the Concert for Love & Acceptance. Without her
pioneering courage, the path to being out and accepted – or even an
LGBTQ ally in country music – would have been much longer and harder.
All of us owe her a great deal of gratitude and admiration,” said Herndon.

During last year’s Concert for Love & Acceptance, GLAAD also
announced the Ty Herndon Rising Stars Grant, bestowed upon young people
for their commitment to enhancing LGBTQ inclusion and representation in
music. The grant is eligible to LGBTQ young people who are working to
accelerate acceptance in the music industry. Applications for the grant
will be available later in April.

The 2019 Concert for Love and Acceptance partners include presenting
partners Ketel One Family-Made Vodka, Southwest, and CMT, community
partner The Weissmann Group, and media partners CMT and Billboard.

The event will take place at the Wildhorse Saloon in Nashville, Tennessee on Thursday, June 6 at 7:00 pm. Click here for ticket information.

As the frontman for the band bearing his name, Daughtry has become one
of the most visible and consistent rock & roll torchbearers of the
21st Century. Throughout his career,
he has released five studio albums, all of which reached the Billboard
Top Ten and have combined sales over 9 million copies in the U.S.

Chely Wright rose to fame as a commercial country singer in the 1990s,
and has since released eight studio albums and charted more than 15
singles on the Billboard charts. Wright made history by being the first
country music star to publicly come out as gay, which she revealed in
her 2010 memoir entitled “Like Me.” That same year Wright founded The
LIKEME® Organization, a nonprofit organization that provides assistance,
resources, andeducation to LGBT individuals and their family & friends, as well
as founding The LIKEME® Lighthouse, an education and community center
for gay youth in Chely’s hometown of Kansas City, Missouri.

Harper Grae has found solid footing as an artist and songwriter by
basing many of her songs on her own life experiences. Her last single,
“Monster,” is included on her critically acclaimed 2018 EP Buck Moon
Medleys, which features two music videos that received special attention
from CMT. The first, “Bloodline,” scored the artist a spot in CMT’s
Artist Development program. When the follow up single and companion
video to “Bloodline” was released, CMT made the unprecedented move for
an indie artist by airing the videos back to back for the premiere of
“Monster.”