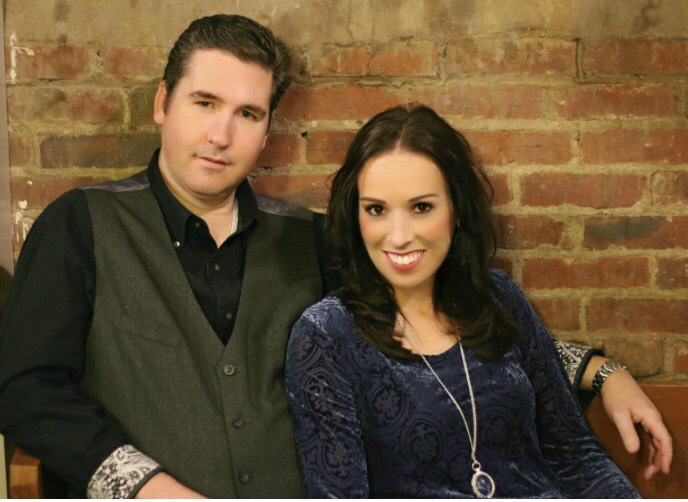 Brooke’s
Answer: Darin and I have always set out to uplift and encourage
others…we’ve always felt that we have the gift of lifting others
spirits and trying to bring a smile to someone’s face. Those were two of
the qualities that we loved about each other when we first met. We tend
to pick songs with a positive message that would help someone overcome
hardships or bring a good memory back around for them. We want our music
to touch people on a personal level just as it has for us. It always
brings tears and a smile knowing God has used us in such a meaningful
and powerful way.

Joint
Answer: So many moments in 2017 were simply surreal and unforgettable.
For starters we were invited to make our Grand Ole’ Opry debut on July 4th…and
then had the privilege of being asked back in December for Opry Nights
at the Ryman. Playing the Opry and Ryman stage to us was a moment we’ll
forever cherish. Those two stages were stages we could have only dreamt
of playing…but when the calls came in…we were beyond ecstatic. These
were stages we had longed to play since we were kids. In September, at
IBMA (International Bluegrass Music Association) we were presented with
two wonderful awards. Darin took home Mentor of the Year and I took home
Female Vocalist of the Year. We were truly honored to be recognized by
fans and our musical peers.

Brooke’s
Answer: When we first heard our current single “I’m Going Under” our
reaction was, “Wow what incredible lyrics that are going to change and
impact lives greatly!” We felt like it would move people in a very
spiritual and emotional way. All of us have experienced ups and downs in
life…some of us so many, that eventually we begin to feel like we’ve
reached the bottom with no one or no where to turn. This song reminds us
that there is someone who ALWAYS hears us in our highest moments AND in
our lowest moments. It was written by Karen Taylor Good and Bill Whyte
in a personal perspective format. You learn in the song someone is
calling out to God, asking for HIS guidance and direction because
they’ve reached the bottom. By the end of the song, the person finds God
in their life and goes under in a different perspective…by being
baptized, “They Go Under” and are forever changed. We truly feel the
words speak to all of us. It reminds us to be still, listen and allow
God to restore our brokenness. We hope each and every listener will be
encouraged through this song and experience the vivid picture it creates
in your mind.

Joint
Answer: We get emails, social media posts and even phone calls on a
daily and weekly basis from people who’ve been touched by the songs we
sing and the relationship that Darin and I have as husband and wife. One
that really stuck with us is from a gentlemen we met a few years ago.
He had written a one page letter explaining how touched he and his wife
were by our music. An awesome part to the story was that he mentioned
his wife who was suffering with Alzheimer’s and had been for quite some
time. He explained that rarely did she respond to anything in the actual
moment. She could remember things from long ago…but not recent
memories. He went on to say as we came onstage and started our set she
instantly perked up like she had been waiting for that moment when we’d
take the stage. He shared with us that they had been fans of our music
ever since they first heard us on the radio. As they listened he said
she began to sing along with me (Brooke) and for that moment in time it
was like Alzheimer’s had never even effected her. The wife he remembered
came back to him for just a little while…that story and so many like
it down through the years remind us of why we do what we do and how we
could never get tired of it.

Lamitschka:
As an artist, you have so many tasks such as recording, touring,
interviews. What do you like best, what’s your favorite activity?

Darin’s
Answer: My favorite task/activity is touring. It’s so much fun getting
to travel around the world and within the U.S. showcasing our music at
awesome venues and festivals. To me there’s no better career you could
have…seeing the world while doing what you love with who you love.

Brooke’s
Answer: Besides the Opry..I’ve always wanted to play Red Rocks
Amphitheater in Morrison, Colorado. I think the sound and scenery would
be so incredible. There’s something about playing at a naturally made
outdoor venue of that capacity that makes you feel that much closer to
God.

Lamitschka:  How do you feel about being winning several industry awards in 2017?  What has it done for your career?

Darin
and Brooke Answer: The feeling after bringing home two awards within
our household in 2017 was so rewarding. Not that awards are the most
important thing in a career, but to know that people appreciate and
recognize the hard work that goes into what you do means the world. When
I (Darin) received Mentor of the Year it meant so much to him. I’ve had
so many folks through the years who’ve mentored me along my musical
pathway…and for me to be able to give that same advice and friendship
to people coming up in the music business really allows me to know I’m
making a difference while getting to be a role model. It’s an awesome
feeling to realize the influence you can have on someone if you just
take time to guide and give advice you’ve learned down through the
years.

When
I (Brooke) won Female Vocalist I  considered it a huge honor! What an
accomplishment to be recognized for a passion I’ve had since I was a
child. The reality of it is still sinking in. To be in the running with
ladies I admire so much in this business and considered in the top five
was very humbling. The response from the audience that night as my name
was called out truly melted my heart. To know my awesome husband,
parents, family and friends got to share in that moment with me in this
lifetime was such an emotional and happy experience🤗

Since
winning these awards, we feel people realize just how passionate and
serious we are about achieving goals and the impact we want to create as
musical artists.

Lamitschka:Most careers don’t last as long as yours. What’s given your career the staying power?

Joint
Answer: Definitely the people and them sharing with us the way we’ve
impacted their lives…but also how they’ve impacted ours. To connect
with people on a personal level and realize how music can be a universal
language connecting us all together. Also, every ounce of heart and
soul we’ve poured into making it in the music business. To realize all
we’ve worked for and accomplished. The name and sound that we get to
call ours is one that we’re proud of.

Joint
Answer: When we get time off we love spending time with our dog Otis (a
Yorkshire Terrier). Other relaxing and favorite hobbies include
Kayaking, Paddle Boarding, playing Golf and working outside in our yard.
Darin enjoys manicuring the yard and I love adding color by planting
flowers.

Brooke’s
Answer: I feel like my biggest critic is myself. I’ve always struggled
with confidence and the thought that I can be as good at something as I
choose to be. Just as Darin has been a mentor to so many…he’s been
mine as well. To see how much I’ve changed from the first time I took
the stage with D&B, to how I take the stage now, 10 years later,
is incredible. Getting to tour and share the stage the last 3 years
with John Cowan and Jimmy Fortune have definitely helped enhance my
stage presence and how to better connect with an audience. Maybe that
comes with age? I know as I get every opportunity I’ve ever been given
has created a learning experience and stepping stone into help mold and
shape the person I’ve became today. I’m thankful for all of those.