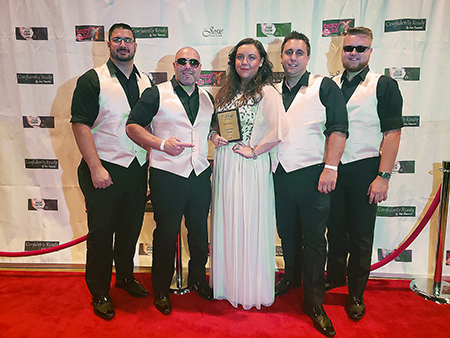 Aspiring performer and recording artist, Dani-elle Kleha, a Pennsylvania native, walked away with the coveted 2018 Josie Music Awards
“2018 Fans Choice Award,” the only award determined by her peers and
submitted for consideration by fans. The Josie Music Awards was held on
​Saturday, September 8 ​in the Celebrity Theatre at Dollywood in Pigeon
Forge, TN. The awards show is centered around recognizing the talent of independent artists.

“Dani-elle had the most incredible comments come in from fans on why she is the Fans Choice.
This award is given to the music artist with the greatest quality of
comments and not the quantity,” said The Josie Networks, Tina
Passantino. “Fans described to our organization how she always puts on
an amazing show for them and that she interacts with them as though they
were family. They love her and her amazing talent.”

“Winning the “Fans Choice Award” is truly one of the biggest honors I
could receive,” said Dani-elle Kleha. “The fact that the fans put their
heart and soul into this award and the industry panel took notice on how
incredible and amazing my bond is with my fans. This means so much to
me. If it wasn’t for the fans, I wouldn’t get to do what I love and live
out these big dreams. They are the reason we get to make music and I am
so blessed to be able to take home this award.”

Dani-elle continues to promote her new single “Get Back Up” released in
April 2018, a song that inspired her “Positive Youth Tour,” a series of
live shows performed at schools in Pennsylvania’s Lackawanna and
Susquehanna counties, where the concerts include segments during which
Dani-elle speaks to students about following their dreams, bullying, and
self-worth.

Dani-elle Kleha is an aspiring, performer and recording
artist from Jermyn, Pennsylvania with a sound well beyond her years.
Her voice is a combination emulating a throwback to 90’s country mixed
with a modern flair. The ability to captivate the audience from the
moment she steps on stage to the moment the crowd files out the doors,
Dani-elle always leaves her fans with a lasting impression. She has
shared the bill with artists Luke Bryan, Jason Aldean, Dierks Bentley
and more. Along with her busy schedule, Dani-elle makes time to give
back to the community and nationally with her position of being the
National Spokesperson for “Veteran’s Promise” as well as headlining the
“Positive Youth Tour,” a series of live shows performed at schools in
Pennsylvania’s Lackawanna and Susquehanna counties, where the concerts
include segments during which Dani-elle speaks to students about
following their dreams, bullying, and self-worth. This is only the
beginning and there is no stopping her now. Her fresh new look and
unique sound has her taking the Country Music world by storm one song at
a time. Stay current with everything Dani-elle Kleha on her website dani-ellesings.com.

About The Josie Music Awards:

The Josie Music Awards is a brand of The Josie Network,
LLC owned by the highly-respected partnership team of Josie Passantino
and Tina Passantino.  This team set out and successfully created an
award show where winners are selected on their talent, skill, material,
professionalism, and more and not by button pressing voting. Nominee
suggestions go through a lengthy review process by a team of industry
leaders and the official nomination list is created from their final
decisions. Winners are also selected by this industry leader team with
no connection to independent artists. The Josie Music Awards is an all
genre music award show ceremony which includes a lavish red carpet and
many performances.  Since its inaugural celebration in 2015, the Josie
Music Awards was, is, and remains the largest independent artist award
show globally. Certainly, the most gala from the red carpet to the
breathtaking venues the award show has been held in such as The Gaylord
Opryland Resort “The Springs” building and the world-renowned
Schermerhorn Symphony Center Concert Hall, & The Nissan Stadium (all
located in Nashville, Tennessee).  Thousands of people from around the
globe attend such as independent artists, songwriters, record labels,
talent agencies, promotion companies, producers, engineers, management
companies, press, music industry businesses, family/friends/fans, and
more come out each year to enjoy the performances, award recognition,
and the elaborate celebration. The Josie Music Awards was created solely
to celebrate those in the independent music industry that work so hard
every day and deserve to have a night of their own.  This night is not
only a celebration, it is also an outstanding way to connect with others
in the industry and be seen by some of the top names/companies in the
business. Find out more about the Josie Music Awards on their website.