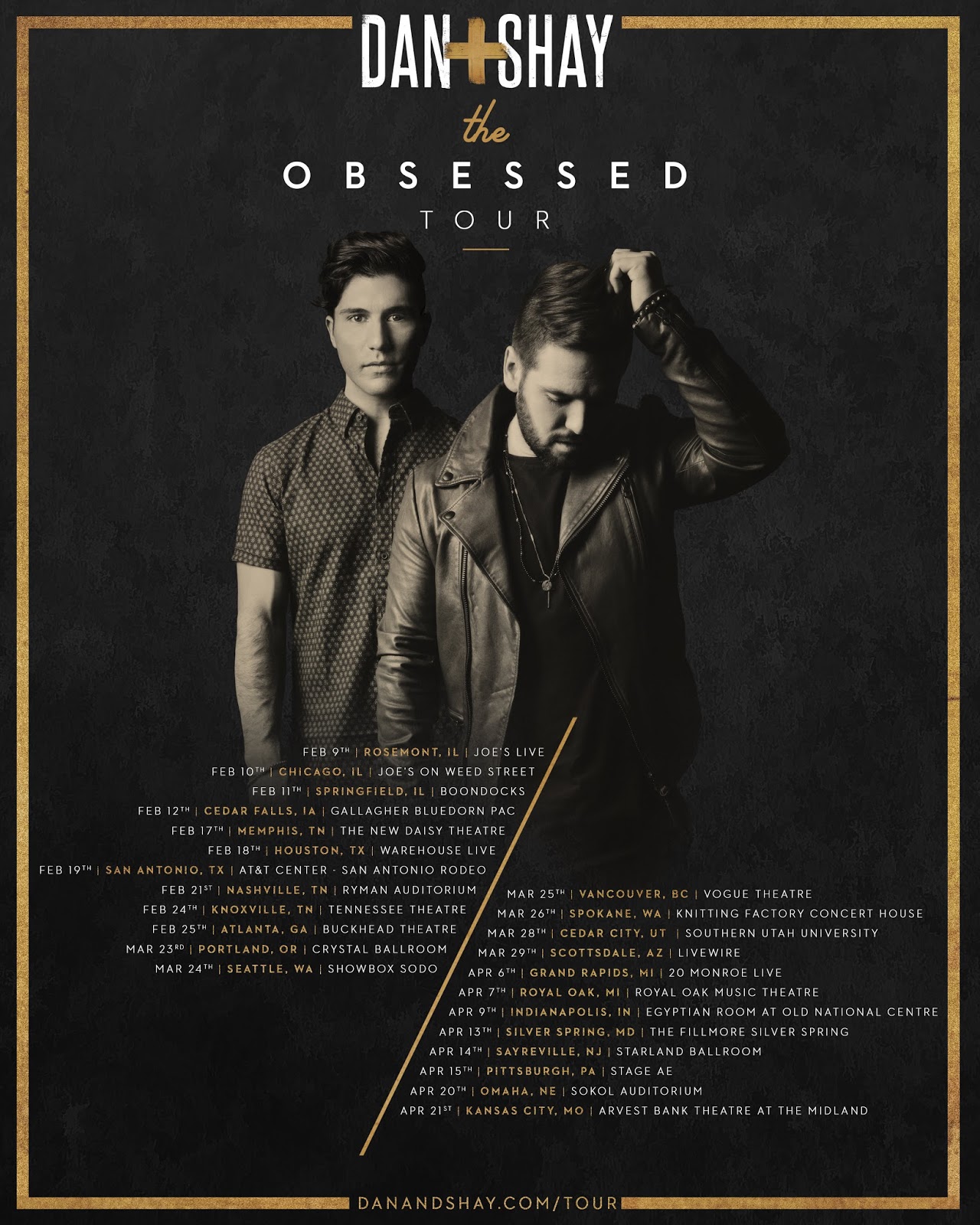 NASHVILLE, Tenn. – Having already sold out shows the first week of their Obsessed Tour, “velvet-voiced duo” (Rolling Stone Country), Dan + Shay decided to keep the good times going by adding 24 more dates across the U.S. and Canada through spring of 2017. The Platinum-selling pair, who Billboard
says puts, “tight harmonies on top of pop-flecked melodies with
positive messages,” has already sold out shows in Denver, Salt Lake
City, Flagstaff, Ariz., and Los Angeles.

Fans will have even more opportunities to hear them perform new hits off their most recent album, Obsessed as
well as album cut favorites and singles, such as their
Platinum-certified debut single “19 You + Me,” off their debut album
that The Washington Post called “equal parts quintessential country and a sound all their own.”

Their newest single off of Obsessed, “How Not To,” is a “pure
slice of radio ear candy” where “melodic and vocal elements of ‘How Not
To,’ coupled with Dan + Shay’s completely uncynical performance,
ultimately make the track a winner” (Taste of Country). The
track that laments a hard-to-forget relationship and is written by Adam
Hambrick, Paul DiGiovanni and Kevin Bard, is at radio now and quickly
climbing the charts.

Dan + Shay spent the summer on Darius Rucker’s Good For a Good Time Tour, where they “glistened with energy and excitement as they played melodic new tracks” (Tampa Bay Times).

ABOUT DAN + SHAY
Dan + Shay’s sophomore album Obsessed debuted earlier this year and follows their 2014 Where It All Began, which made them the first new country duo in SoundScan recorded history to debut at No. 1 on Billboard’s
Country Albums Chart. The album included the debut single, “19 You +
Me” which earned RIAA Platinum certification, and their first No. 1
single, “Nothin’ Like You,” which earned RIAA Gold certification.
Racking up more than 60 million YouTube views, the pair has impressively
sold more than 2.2 million digital tracks and more than 620,000 album
equivalents to date, including 240 million streams. Their first single
off Obsessed, “From The Ground Up” earned RIAA Gold
certification and marked their second to hit the top of the charts. They
have earned three consecutive nominations for both ACM Vocal Duo of the
Year and CMA’s Vocal Duo of the Year award as well as nods for an
American Country Count-down Awards, CMT Awards, and Radio Disney Music
Awards.