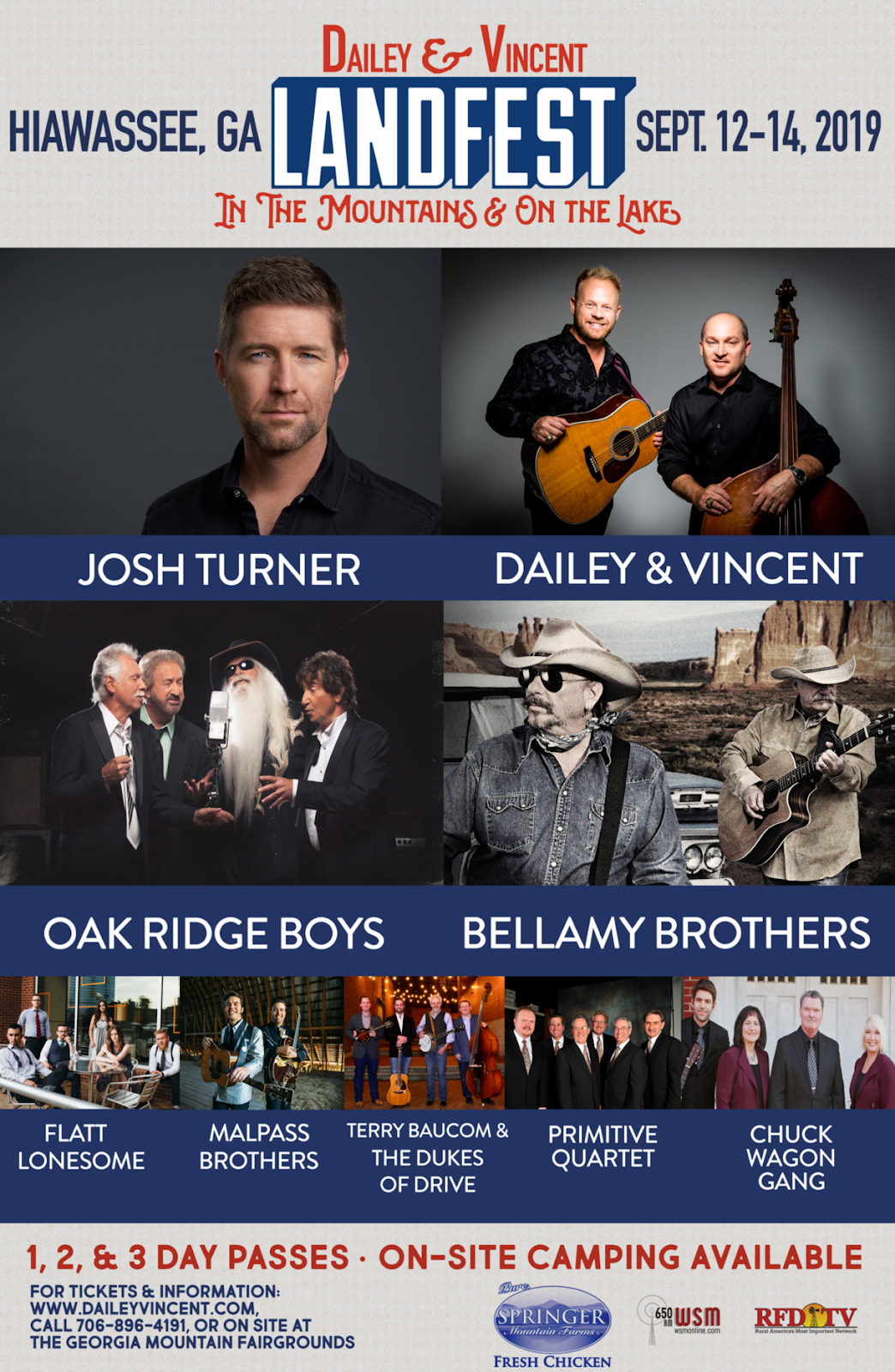 Dailey & Vincent announced today their annual LandFest In The Mountains & On The Lakes music festival, presented by Springer Mountain Farms and celebrating the best of American music,has sold out its 3,000 cap venue space all three nights of the festival. This year marks the three-time GRAMMY® nominated group’s sixth time hosting the festival, which takes place at the Georgia Mountain Fairgrounds in Hiawassee, Ga. September 12-14. Dailey & Vincent will be joined by legendary acts Josh Turner, The Oak Ridge Boys and The Bellamy Brothers. The festival will also feature performances by Flatt Lonesome, The Malpass Brothers, Terry Baucom & the Dukes of Drive, Primitive Quartet and Chuck Wagon Gang.

Each
year, Dailey & Vincent curate the festival lineup in much the same
way they’ve developed their career over the last decade; delivering
music fans an evolved combination of “the best of bluegrass, country and
gospel this side of heaven” (USA Today), what the band defines as American Music. Their unique marriage of genres hasmade them three-time GRAMMY® nominees in country, bluegrass, and for a gospel record, earned them membership with the prestigious Grand Ole Opry, garnerednine #1 country, bluegrass and gospel Billboard charting records, and helped launch their national weekly television series The Dailey & Vincent Show, now in its fourth year on RFD-TV.

The group has already announced next year’s LandFest, which will once again take place at the Georgia Mountain Fairgrounds September 17-19, 2020. The talent lineup for 2020 LandFest will be announced shortly.

LANDFEST IN THE MOUNTAINS & ON THE LAKE 2019 LINEUP:

Terry Baucom & the Dukes of Drive

Grand Ole Opry Members, five-time GRAMMY® award winners individually, three-time GRAMMY® award nominees collectively, four-time DOVE Award winners and winners of 35 IBMA Awards altogether (including 3-time IBMA Entertainer of the Year Award winners and 3-Time Vocal Group of the Year Award  winners), Jamie Dailey and Darrin Vincent (and their world-class band) offer a unique and modernized spin on ‘American music’ – an “electric combination of country and bluegrass” (Billboard) – the duo has played across the globe, taking the stage at iconic venues including the Ryman Auditorium and Carnegie Hall. Now on Season 3 of their nationally broadcast television series, “The Dailey & Vincent Show on RFD-TV,” Dailey & Vincent bring their music to a national audience on a weekly basis. After a decade spent  performing together and with over 1,000 airings of their PBS special “Dailey & Vincent ALIVE – In Concert,” their concoction of fantastically instinctive vocal blends of Dailey’s tenor and Vincent’s reedy harmonies has gained them well-deserved praise for their own distinctive style and worldwide recognition as American Music gold. Their most recent live CD, “Dailey & Vincent ALIVE,” debuted at No. 1 on the Billboard Bluegrass charts and remained at the top position for over 15 weeks. Dailey & Vincent’s latest release of their first-ever Christmas album, “Dailey & Vincent: The Sounds of Christmas” debuted at No.  1 on the Billboard Bluegrass chart and No. 8 on the Billboard Holiday Chart, landing right behind Michael Bublé and Pentatonix as the only country, bluegrass and gospel act in the Top Ten.