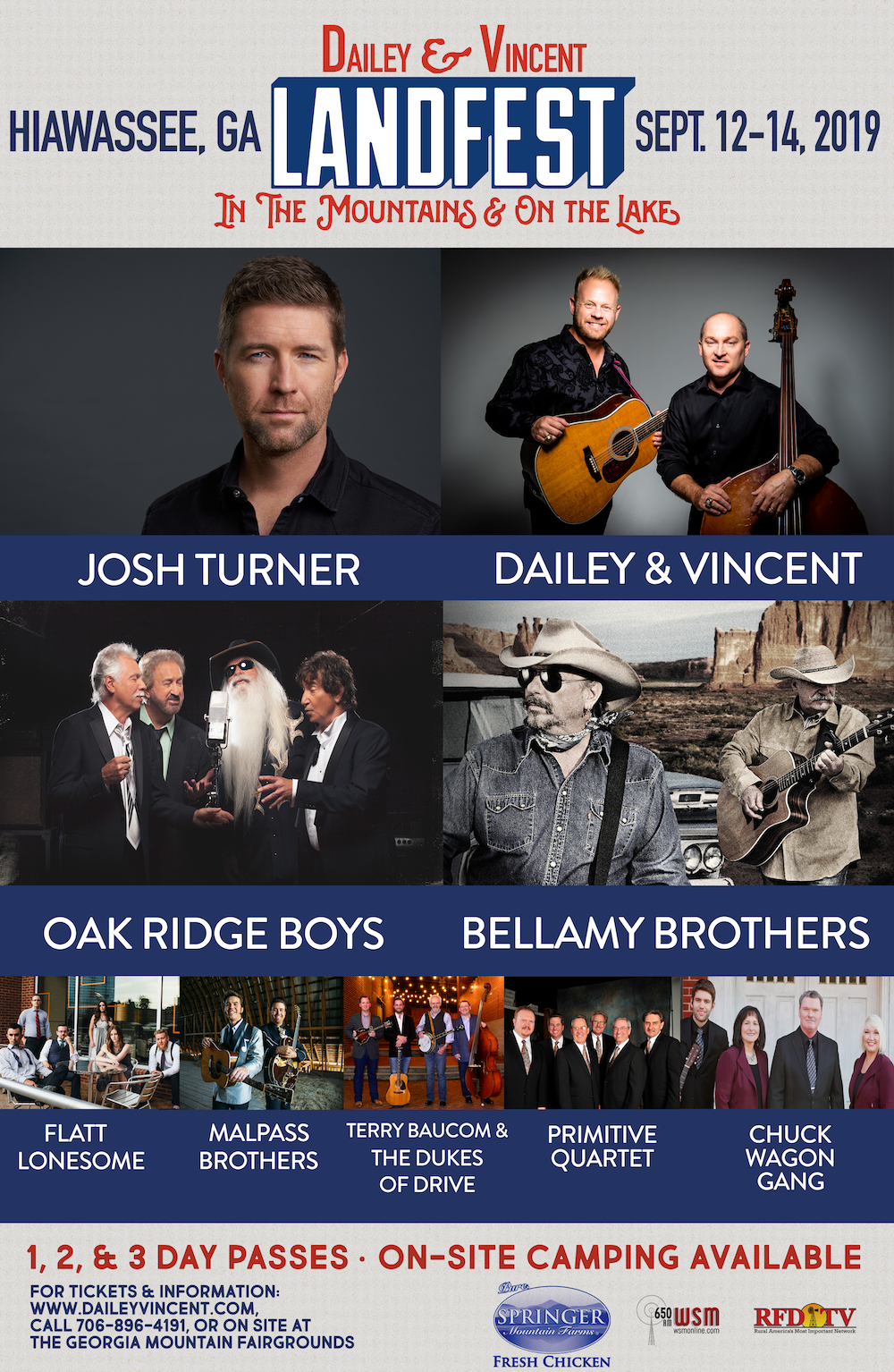 With 3,000 people in attendance per day, Dailey & Vincent’s annual
3-day music festival is holding an online band contest for the first
time ever. LandFest is holding an online band contest for musicians to
enter for the chance to perform an hour-long set onsite during LandFest
In The Mountains & On The Lake 2019. The winner, chosen by the
Georgia Mountain Fairgrounds Board, will have a mainstage performance
slot from 3:00 to 4:00 p.m. on Saturday, Sept. 13 in Hiawassee, Ga.

To enter the contest, please email two video performances and your band’s photo to LandfestBandContest@gmail.com.
Entries are accepted until Aug. 1, 2019. The winner will be selected
and notified via email by the Georgia Mountain Fairgrounds Board by Aug.
15, 2019.

One, two and three day passes are available as well as on-site camping. To purchase tickets or for more information, visit DaileyAndVincent.com,

GeorgiaMountainFairgrounds.com or call the Georgia Mountain Fairgrounds at 706-896-4191.

LANDFEST IN THE MOUNTAINS & ON THE LAKE 2019 LINEUP:

Terry Baucom & the Dukes of Drive

Grand Ole Opry Members, five-time GRAMMY® award winners individually,
three-time GRAMMY® award nominees collectively, four-time DOVE Award
winner and winners of 35 IBMA Awards altogether (including 3-time IBMA
Entertainer of the Year Award winners and 3-Time Vocal Group of the Year
Award  winners), Jamie Dailey and Darrin Vincent (and their world-class
band) bring their blend of American music; defined as bluegrass,
traditional country and  gospel music, across the globe and to iconic
venues such as the Ryman Auditorium and Carnegie Hall. Now on Season 3
of their nationally broadcast television series, “The Dailey &
Vincent Show on RFD-TV,” Dailey & Vincent bring their music to a
national audience on a weekly basis. After a decade spent  performing
together and with over 1,000 airings of their PBS special “Dailey &
Vincent ALIVE – In Concert,” their concoction of fantastically
instinctive vocal  blends of Dailey’s tenor and Vincent’s reedy
harmonies has gained them well-deserved praise for their own distinctive
style and worldwide recognition as American Music gold. Their most
recent live CD, “Dailey & Vincent ALIVE,” debuted at No. 1 on the
Billboard Bluegrass charts and remained at the top  position for over 15
weeks. Dailey & Vincent’s latest release of their first-ever
Christmas album, “Dailey & Vincent: The Sounds of Christmas” debuted
at No.  1 on the Billboard Bluegrass chart and No. 8 on the Billboard
Holiday Chart, landing right behind Michael Bublé and Pentatonix as the
only country, bluegrass and gospel act in the Top Ten.